This week’s stop on the magical mystery tour of minor league games brought me to Wilimington, DE and “Judy” Johnson Field at Frawley Stadium to see the hometown Blue Rocks take on the Carolina Mudcats in Class A Carolina League action. It was a combination of celery, bacon, bobble heads, and some really interesting baseball history, because what great baseball trip DOESN’T include those four things??

I will be honest up front. This week, as opposed to my last two posts (from Harrisburg and Lehigh Valley), I decided to forgo asking for a press pass. This week I wanted to enjoy the action solely from a fan’s perspective. And the Blue Rocks did not disappoint! The park was cozy (capacity of just over 6500), the fans and staff were very friendly, and the action on the field was a lot of fun! I arrived early because it was George Brett bobble head night, and wanted to make sure I was there early enough to secure this great giveaway. The Blue Rocks are the high A affiliate of the Royals, and when asked why George Brett, Joe Valenti, Director of Marketing for the Blue Rocks, replied, “There is no real reason for the Brett bobble, other than the fact that he is a Royals legend. We have a great relationship with both the Royals and Mr. Brett. He has made several appearances at our stadium, including most recently for last year’s All-Star Game. When deciding on our promotions for this season, it seemed like a no-brainer to honor him this year.” Not that I was going to complain. Brett was always a favorite of mine growing up, and remember following his 1980 season daily as he flirted with being the first .400 hitter since Ted Williams. He finished that year hitting .390 en route to being voted AL MVP that year. Brett was elected to the Hall of Fame in 1999 with what was then the fourth highest voting percentage in history, 98.2%! 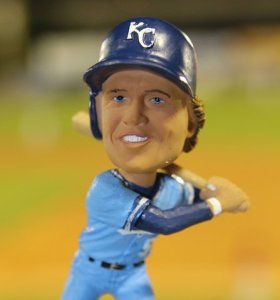 I did arrive early enough to tour around the stadium and take a sneak peek of bp. I was a bit worried about the weather but the clouds quickly passed and it turned out to be a great evening for baseball! I was lucky enough to even snag a souvenir. It didn’t last long, though, as I gave it up later in the game to a young fan! 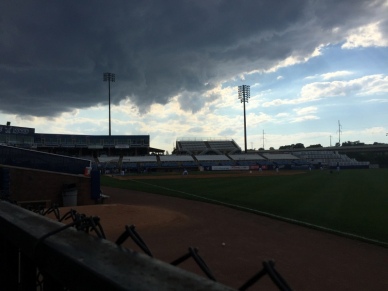 I think this guy even has a higher batting average than I did in little league!

A bit of history before we get to the game experience. You probably noticed the title and the mention of Judy. The field is named after William Julius “Judy” Johnson, one of the greatest third basemen of all time. Johnson was a star in the Negro Leagues, and grew up in Wilmington. Johnson first signed with Hilldale for $135 a month in 1921, then moved on to the Homestead Grays, then later played for the Pittsburgh Crawfords. He was nicknamed “Judy” because he resembled Judy Gans, a player for the Chicago American Giants. While Buck O’Neil is recognized as the first full time black coach in the majors, Johnson was also an early scout for the Phillies, and was a spring training coach for Philadelphia in 1954, thus becoming the first black coach ever in the majors. The hall of famer (elected in 1976) is honored with a statue and plaque outside the stadium.

After securing the aforementioned bobble head, I decided to cruise the concourse to check out this great little ballpark. Although it opened in 1993, the designers had the foresight to have an open concourse, meaning while you are in line for your favorite grub, you can still look out and see the action on the field. A nice touch for a bit of an older park! I cruised the well stocked gift shop, appropriately named “The Quarry.”  The concourse also includes banners honoring former Blue Rocks who made it to the show. 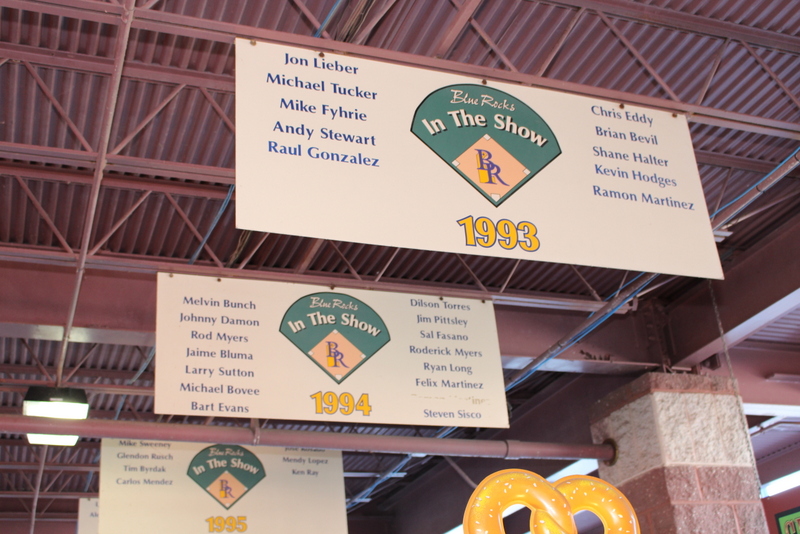 There were plenty of eat and drink options. From fancy grilled cheese sandwiches to a very nice little bar.

By the way, Stalkers Pub gets its name from one of their mascots, Mr. Celery, a stalk of celery that comes out to “Song 2” by Blur when Wilmington scores a run. Sadly he was spotted only once tonight. 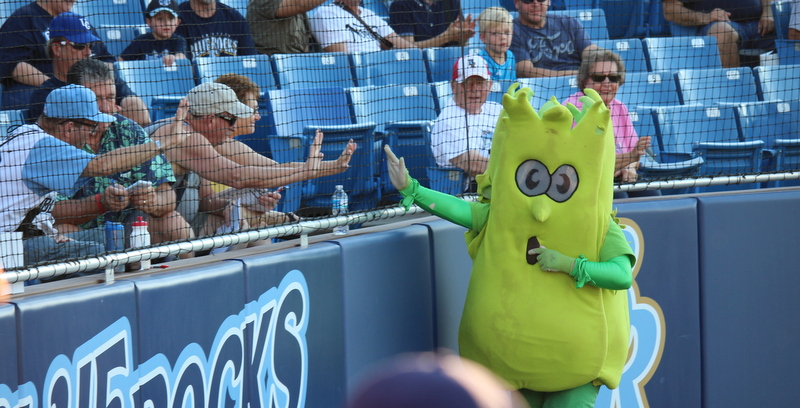 All week long, though, I had my taste buds ready for the famous Sweenie Dog. Making its debut this year at the stadium, it’s a hot dog nestled between a glazed doughnut roll topped with bacon (and who doesn’t love bacon?!?) and raspberry jam! It’s like having breakfast, lunch, and dinner all in one meal! All I can say is YUM!

After loading up on the sweetest hot dog I’ve ever had, I settled into my seat for a great night of baseball. As the Blue Rocks took the field, they were accompanied by local little leaguers for the national anthem. Truly this little guy was a man among giants!

I quickly made friends with my section mates, including Tom, who was sitting next to me with his family. Tom’s wife was grateful he brought a glove to protect her from foul balls. As was I!! Only one came our way, and while I jumped up, it was a full 5-10 feet over my outstretched arms. When I sat back down, Tom said he wasn’t quick enough to jump up to get balls, with a few titanium rods in his back due to back surgery. I guess his titanium rods win over the titanium plate in my wrist!

Another great food option was found down the first base line at the Chickie’s and Pete’s stand. Chickie’s and Pete’s has about 15 locations and are famous for their crab fries. According to their website, these are special fries invented by Pete – bathed in a secret blend of spices (only Pete knows the recipe!) and served with two sides of our one-of-a-kind White Creamy Cheese Sauce. I have to say, they lived up to the hype!

The Blue Rocks got on the board first with leadoff hitter Carlos Garcia scoring in the bottom of the first to give Wilmington the early lead. 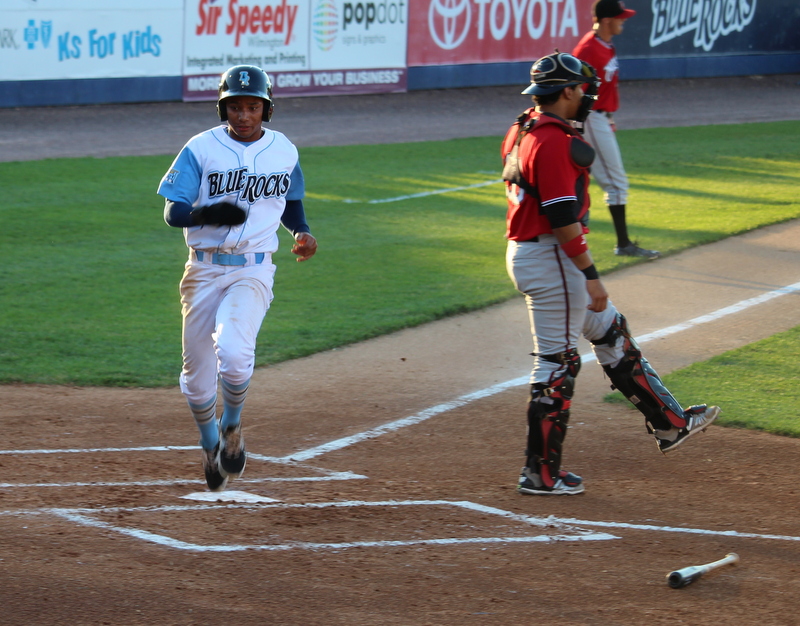 Starting pitcher Jake Junis pitched seven strong innings for the home team, giving up just 3 runs on 6 hits but the Blue Rocks could muster no more offense as Wilmington fell 3-1 to the Mudcats.

Reflections of the stadium off a helmet 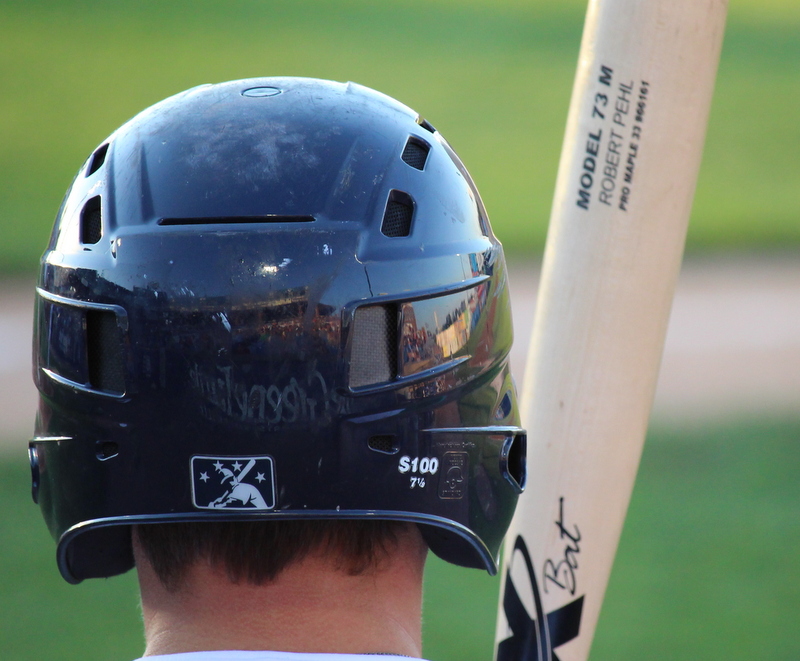 “Nobody seems to know what to get Millie or Jimmy for their wedding present.” “Okay, well, uh… candlesticks always make a nice gift, and uh, maybe you could find out where she’s registered and maybe a place-setting or maybe a silverware pattern. Okay, let’s get two! Go get ’em.” 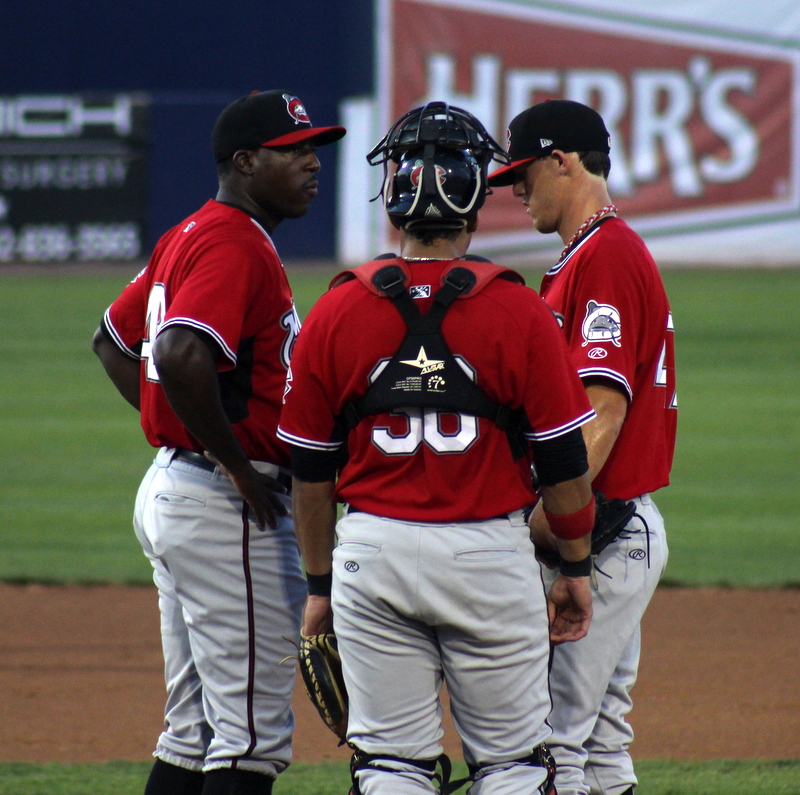 Logan Moon just gets out of the way of an inside pitch!

The Blue Rocks do a great job with their between inning games, including the bat spin race and the racing eyes. And their mascot Rocky can be found all over the ballpark much to the delight of young fans! 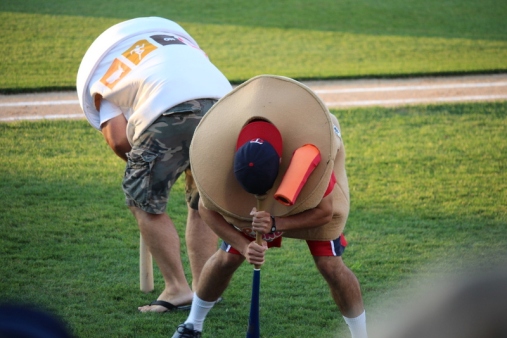 The evening was capped off with a concert from the King himself. What a fun night. This nice little ballpark knows how to put on a show and was well worth the 3 hour drive up 95!

In the morning, there was a bit of a reunion. George, meet George!