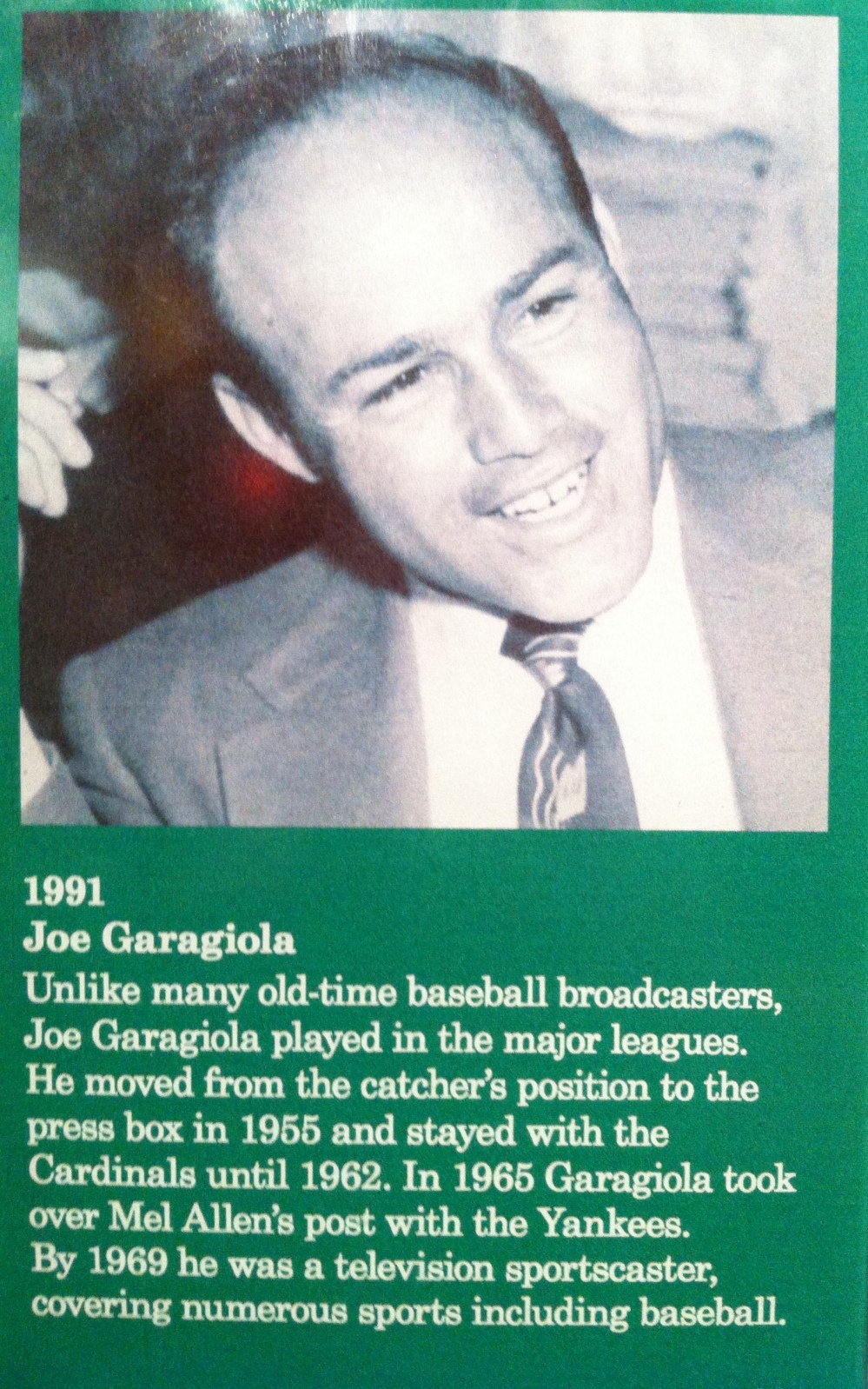 Feeling very nostalgic this evening. Growing up I was not a great little leaguer. My batting average often flirted around the Mendoza line, even before there was such a thing. But the one thing I looked forward to every Saturday was NBC’s “Game of the Week” with Joe Garagiola and Tony Kubek. I would scatter my ever growing collection of baseball cards on the floor, and listen to Garagiola and Kubkek call the game with my plethora of cards from that week’s teams. I also remember tuning in to Garagiola’s “Baseball World of Joe Garagiola” and watch with great envy the “Bazooka Bubble Gum Blowing Championships”, including the 1975 winner, Kurt Bevaqua! i would have to say, the namesake of this blog not withstanding, Joe Garagiola had the biggest influence on this baseball fan’s life growing up with the sport. When I heard about his passing today, I felt a large piece of my childhood vacating my life.

We all know the story about Joe. He grew up in St. Louis, with his best friend Yogi Berra. Garagiola and Berra were inseparable, and both signed contracts as high schoolers. One made it to the Hall of Fame on their playing ability, the other made it to the HOF on their broadcasting skills. They remained friends their entire lifetimes, and even Garagiola acknowledged this in his HOF induction speech. But both impacted many fans in many different ways. While I didn’t get to see either play, they affected countless of fans in many ways.

My earliest memories of Garagiola growing up was his self deprecating humor about his baseball skills. True, his slash line is not that impressive: It was a modest .257/.354/.385. He stated on numerous occasions that his scouting report read “Deceptive speed: even slower than he looks.” He won a World Series ring as a rookie with the Cardinals in 1946, batting .316 and had 4 hits in Game 3 of the 1946 WS, and out hit HOFer Ted Williams in the series .316 to .200 en route to a Cardinals championship that year. He would later joke that in Game 3, he had 4 hits in game 3 but the headlines were more about Williams actually bunting in that game!

But my fondest memories of Garagiola were of him calling games. I still remember him telling a story on air in the early to mid 70s about calling a game with the Yankees where the analyst who I thought he told was Dizzy Dean in the 60s. Gaagiola looked down at the scorecard and saw the notation “WL” on a play. Garagiola asked what that meant, and was told “It’s for Wasn’t Looking.” It cracked me up at the time. In 2014 I had the opportunity to ask Joe Garagiola, Jr about this story, to see if I was imagining things or did this ever happen. He confirmed the story, although he said the color analyst was non other than Yankees great Phil Rizzuto. Amazing how some stories stick with you for 40 years!

Regardless of whether it was Rizutto or Dean, Garagiola’s ability to tie the old stars (whom I didn’t have an appreciation for at the time) to the modern game was impeccable. Two of the first books I read when first getting into the history of baseball were “Baseball Is A Funny Game” and “It’s Anybody’s Ballgame.” Must reads for any baseball fan.

Without getting too sentimental about the passing of this great ambassador of the sport, I leave you with a couple of clips that span his career. Certainly you can find many more on YouTube of his long broadcasting career. The first, going back to 1947, is Garagiola playing in the inagural game at Al Lang Field in St. Petersburg, FL, against the Yankees. This has sentimental value to me because I grew up in St. Petersburg, and while I never saw him play, I attended a few spring training and minor league games when it was Al Lang Field.

The second clip is from his retirement as a broadcaster. Garagiola was a part time analyst with the Diamondbacks through the 2013 season, and this speaks volumes about his love for the game.

Finally, I’d like to leave you with his HOF induction speech. He references his lack of baseball skills, but talks about his relationship with Yogi, how they grew up, and at the end, mentions his parents and Yogi’s parents, and how they finally made it. The speech is truly incredible, but if you don’t have time, skip to about 6:50 into the speech where he thanks his family, and talks about Yogi and his family.

Thank you Mr. Garagiola for turning me into the fan that I am today! And I hope today you are having a great game of catch with everyone! You had three dreams growing up: to meet the Pope, to sleep in the White House, and to be in the Hall of Fame. You met them all, and so much more. Thank you!