Red Sox…. Fenway Park…. Green Monster…. and deep fried oreos? Is this a cross up in the space-time continuum? Nope, it must be Salem, Virginia and home of the Salem Red Sox!

While I have yet to see a Red Sox game in Fenway Park (I did get to experience playoff action against the Yankees in a packed sports bar on Landsdowne Street in 2003), the next best thing has to be visiting the Salem Red Sox at Lewis-Gale Field at Salem Memorial Park. The southern version of the Red Sox play in a great little stadium nestled in the shadows of the Blue Ridge mountains. Salem has been home to minor league baseball going back to 1955 when the Salem Athletic Club fielded the Salem Rebels, which were an independent team in the then Class D (later Rookie League) Appalachian League. In 1960 they became a farm team of the Pirates, and joined the Carolina League in 1968. They have gone through a few name changes (Rebels, Buccaneers, Redbirds, Avalanche, and Red Sox) as well as affiliations (Pirates, Giants, Padres, Rangers, Rockies, Astros, and now Boston), but their fan base has stayed loyal. In fact, one fan was introduced during the game who had been a season ticket holder since the late 70s! And she has already signed on for the 2017 season!

Their current home has also gone through a few name changes. Opening in 1995 as Salem Memorial Park, it is meant to be a tribute to all the vets in the Salem area. Inside the gates of the stadium is a very nice tribute to all the veterans, which was donated by American Legion. Their support of veterans continues, as last night’s ball game was military appreciation night, which many veterans coming out to enjoy the game and to be honored.

The color guard came out for the presentation of the flag and the National Anthem. 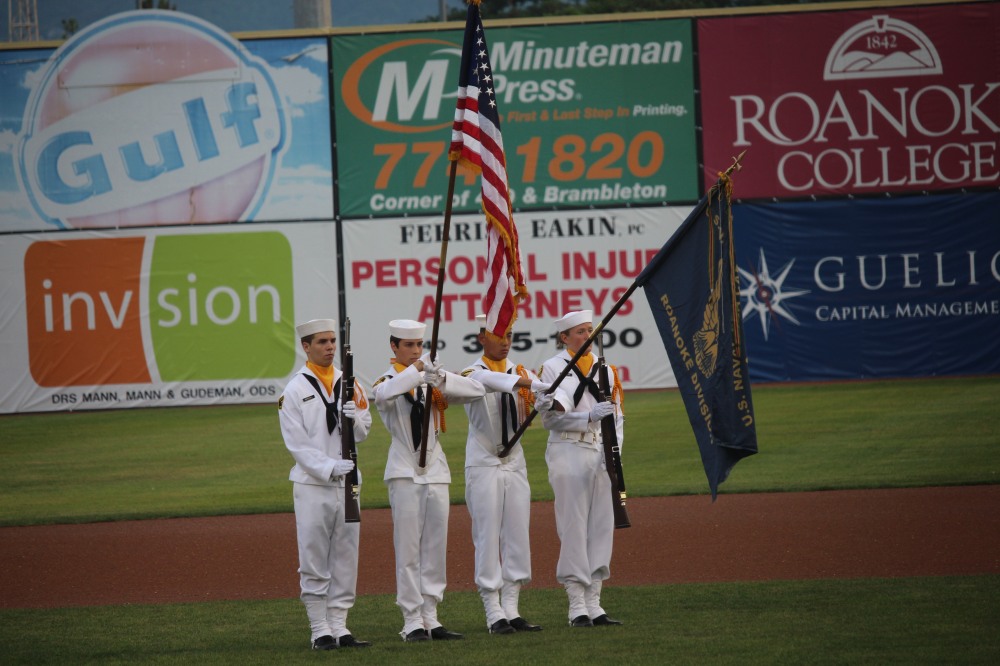 Just a couple of the groups that were present at the stadium, and a wide group of veterans were honored before the game. 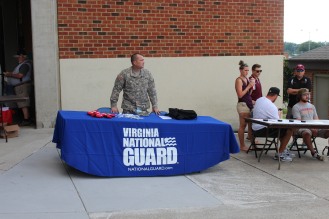 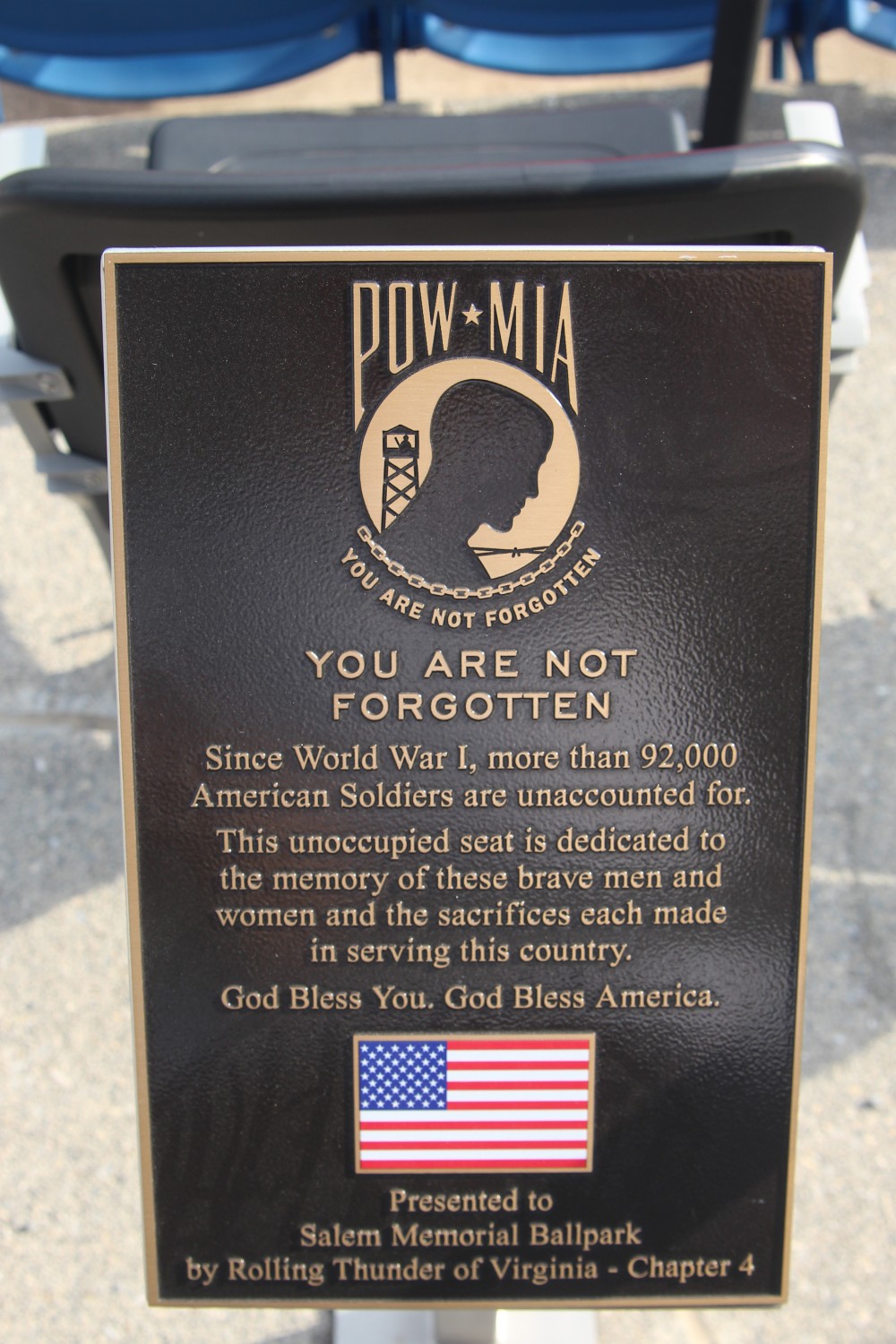 The stadium is a great place to watch a game. It has a very nice wide, open concourse so you don’t miss any of the action while getting food. In the center of the concourse is a very nice beer stand, and it has plenty of high top tables to sit back with your favorite beverage or food item. The stadium also has ten luxury boxes. The food choices were awesome, and I’ll get to that in a minute! 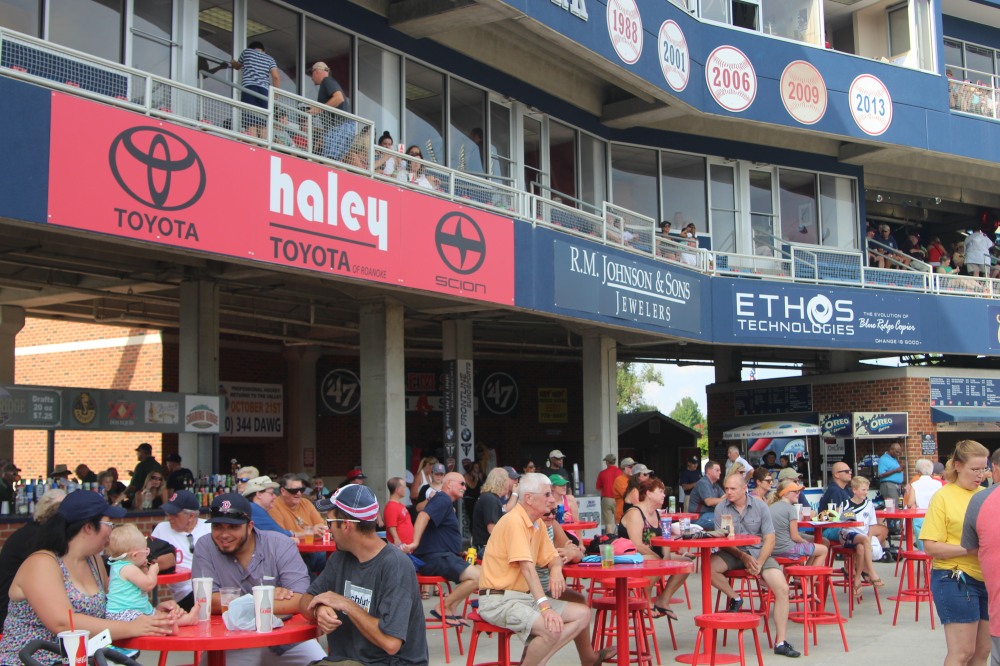 Down the first base line, they have two picnic areas, one of which puts you right next to the visitors’ bullpen!

The in game experience was second to none! I’d have to say many teams go a bit over board with the games between half innings. The Red Sox certainly had some great entertainment, but it wasn’t overkill and didn’t try to overshadow the action on the field. One game had contestants in large plastic balls trying to stay within a hula hoop for up to 5 seconds without being knocked out. This is where you find out just how close your friends are! 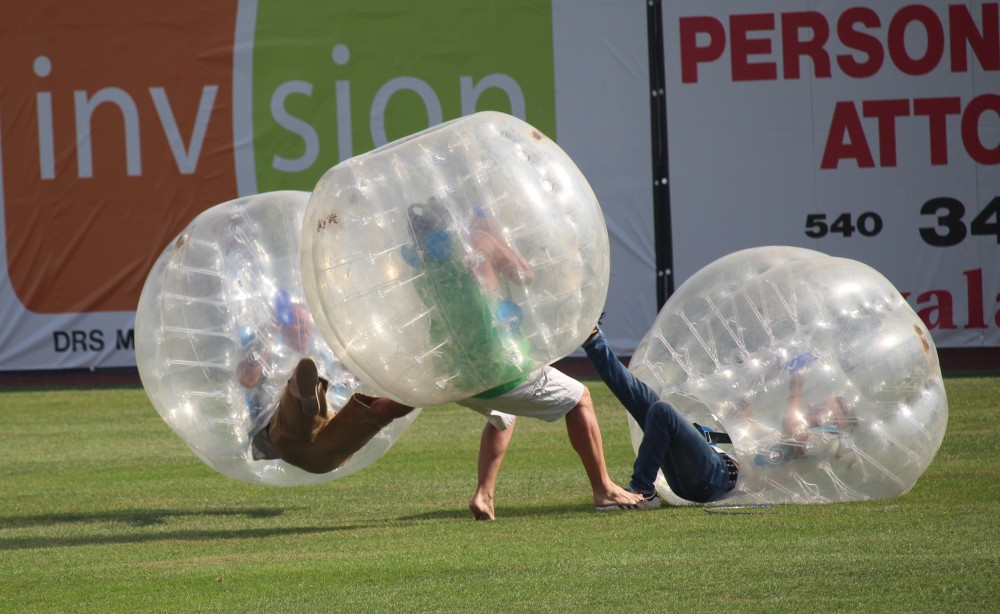 Another cool one, if you will, was to catch water balloons on the top of your head. Given how warm it was, I am sure they had plenty of folks who wished they were able to participate!

There was no shortage of souvenir options. If I had a nickle for every time I was tempted to buy souvenirs at the minor league parks I visited, I would still be broke! The Sox had a table set up where they were selling left over giveaways, which included Carlton Fisk bobbleheads, replica Fenway Parks, and David Ortiz World Series MVP rings. I was truly tempted on the last two. In hindsight, I regret not buying either. 😦 I coulda had bling like Big Papi!

Their team store was incredible! While it was behind the stadium, it was one of the most spacious shops I’ve seen!

Before I go any further, I want to give a shout out to Ryan Shelton, President and GM of the Salem Red Sox. I ran into Ryan while I was outside taking some photographs of the mini Fenway they have set up. Ryan certainly has more than enough to handle on game days than to take time out to chat with a blogger, but we had a nice conversation about the set up of the ballpark, and he gave me a couple of photo suggestions to capture the beauty of the mountains behind the park. True confession, he handed me his business card, which I just casually glanced at while I was handing him mine, and I didn’t notice at the time who he was. So word of advice, always be on your best behavior, you never know who you will run into at a game. Thanks Ryan!

I did manage to grab one free souvenir at the game. Notice I said grab, not catch. I was waiting in line at the concession stand when a foul pop up came our way. I’m no spring chicken, and certainly didn’t have a glove! Rather, I had my camera bad over my shoulder. One fan, about my age, glanced my way, and we knew neither of us was going for it! After it bounced a few times, I picked it up. We both said we were too old to be trying to make bare handed grabs!!

I ran into Mugsy, their mascot, a couple of times. He is a pretty cool mascot, and glad he was sporting the camouflage top to match the Red Sox in game two. Of course, he was a big hit with the kids! 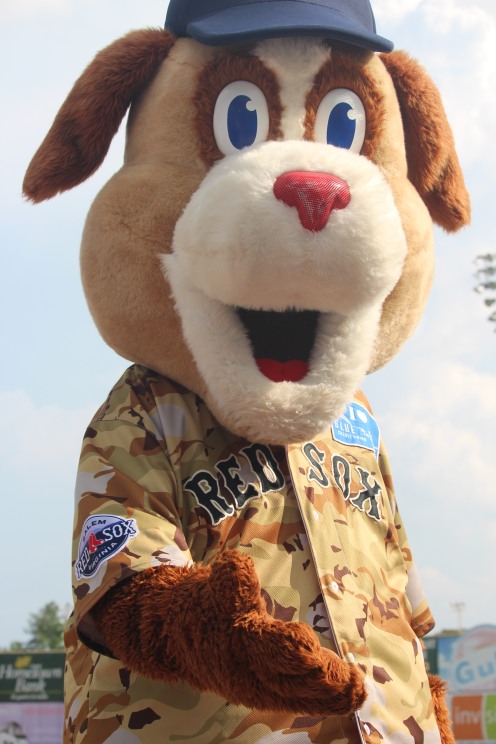 Speaking of Fenway and the Green Monster, the Salem Red Sox have recreated that experience for all with their little version of Fenway. Here’s a photo of some wiffle ball action going on.

On more than one occasion, friends have noted my blog is really a food blog wrapped inside a baseball theme. I would sometimes have to agree. What the Red Sox lack in quantity, they surely make up in quality. Don’t take me wrong. The number of stands available is perfectly suited for the stadium and crowds they draw. There was never a line, even though they have just a few key concession points. However, besides the standard ballpark fare, they have some great additions! First order of the day was to find something unique, and I didn’t come away disappointed. I was drawn, ner I say, called, to the Swinedrive Deli Dawgs stand on the third base side. Their menu was very intriguing!

Upon further inspection, they had a description of their specialty dawgs.

After some intense deliberation, I chose the Cowboy Dawg basket with fries. I think I made a good choice!

They had a gourmet burger place, the Texas Street Grill, behind the third base stands, and while the fare looked incredible, they weren’t fully up and running when I first entered the stadium, and while I was there for two games, I couldn’t bring myself to indulge in two dinners. Maybe next time!!

Against my better judgement, and probably against doctor’s orders, I decided to indulge in dessert. While I have generally resisted desserts at ballparks, I finally decided to try the classic deep fried Oreos. Let’s just say I was NOT disappointed!! 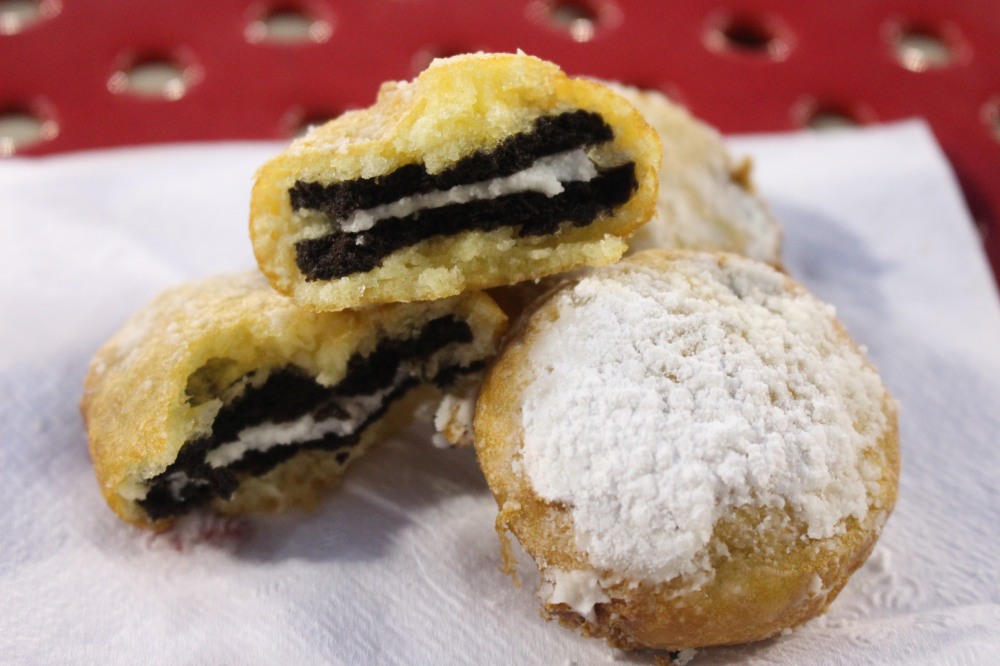 The Sox battled the Frederick Keys in a double header, and both games were full of action. The Keys took game one, 6-4, but had to survive a 9th inning rally by the Red Sox that saw them plate 3 runs in the bottom of the 7th to close the gap. The home team rallied in the second game, 3-1, to earn the split. Salem was the first half winner of the Southern Division of the Carolina League, and is comfortably in second place in the second half of league play.

Catcher Jordan Procyshen battles the sun to make a putout.

Safe on a throw back to first. 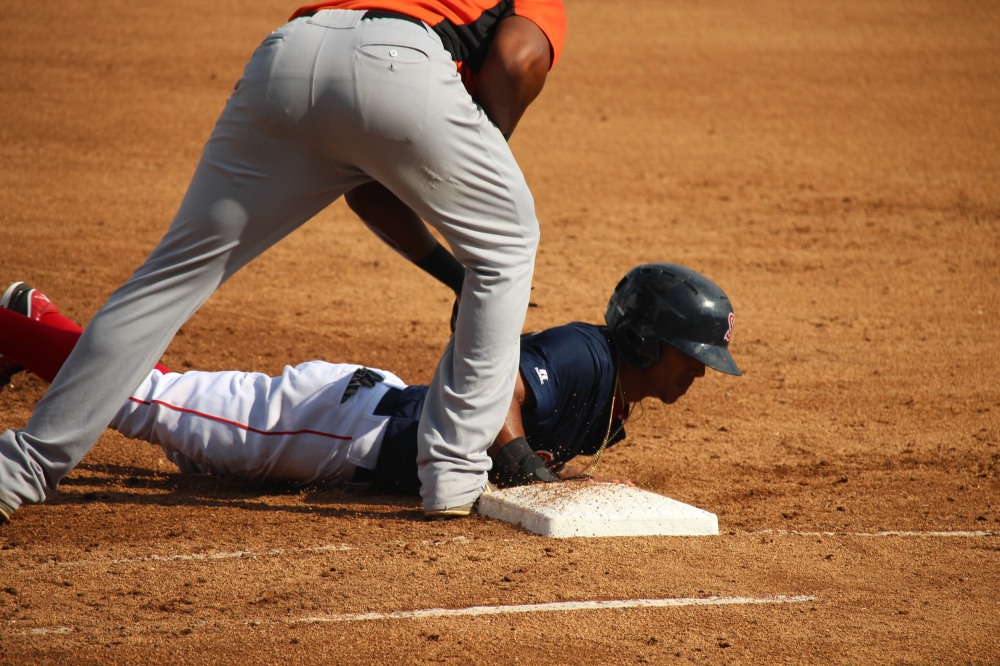 Anyelo Leclerc fires in for a strike 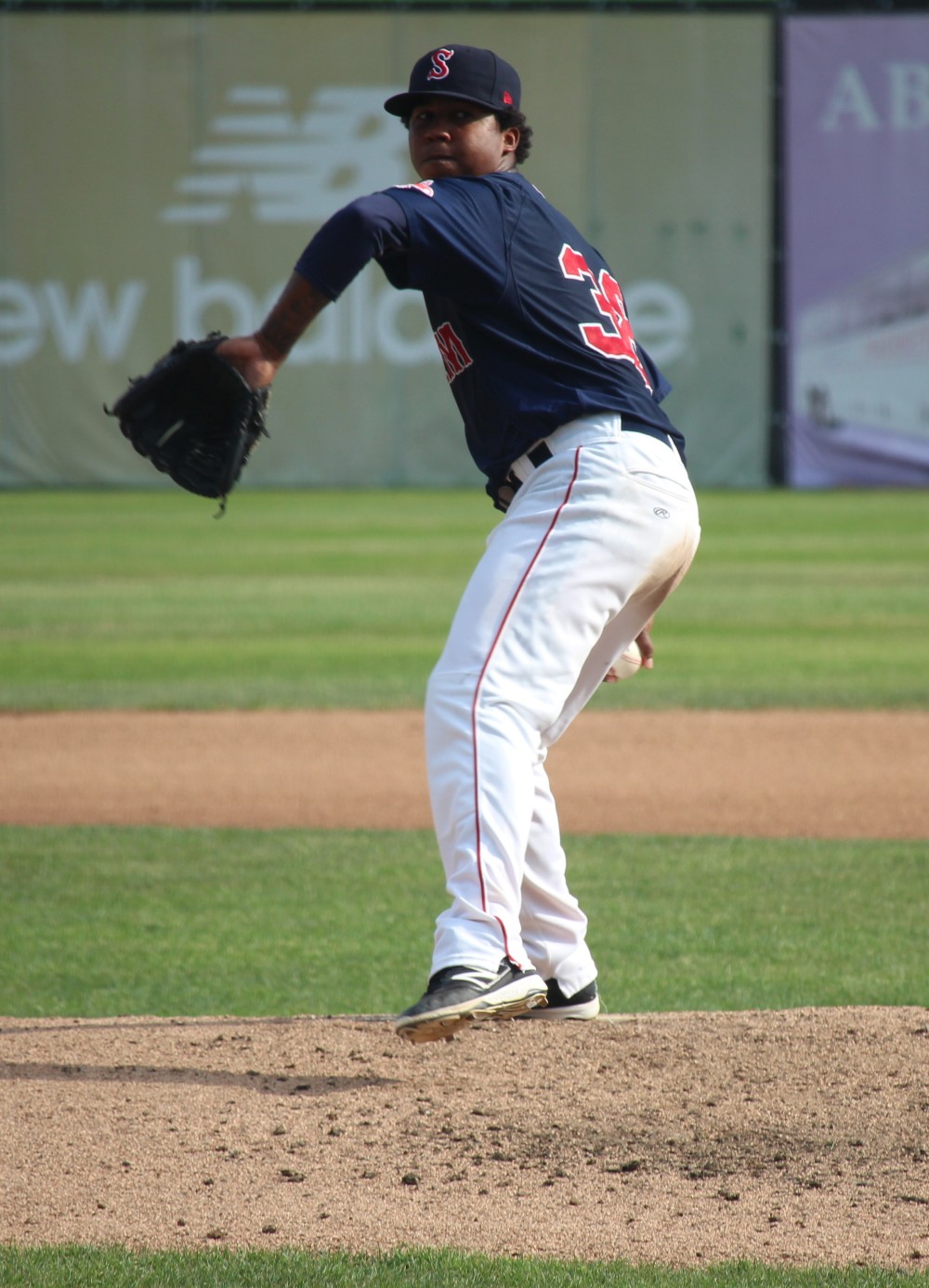 Rafeal Devers watches it come in. 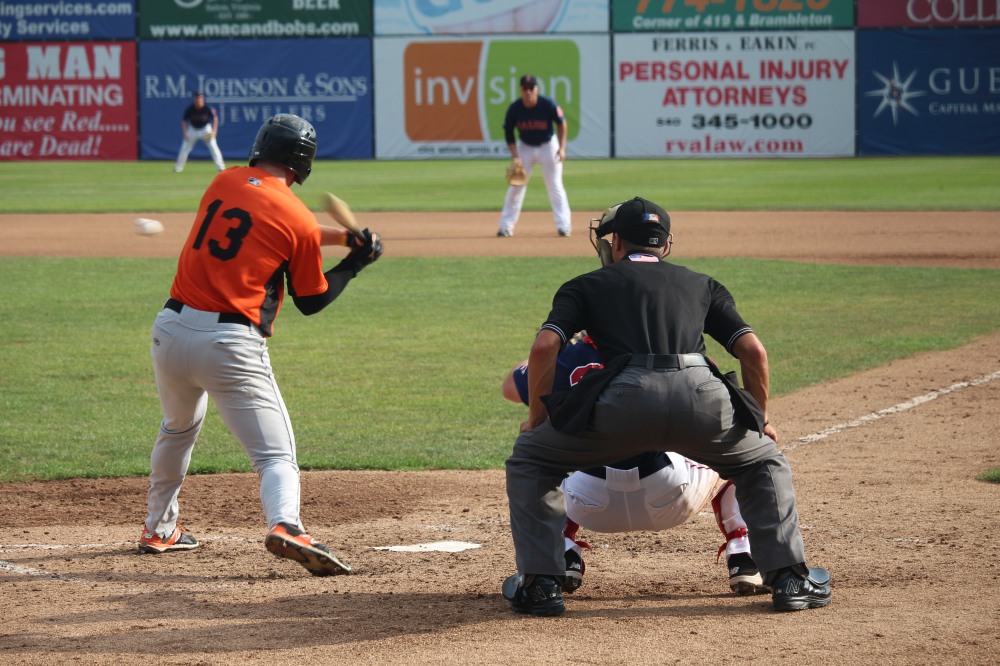 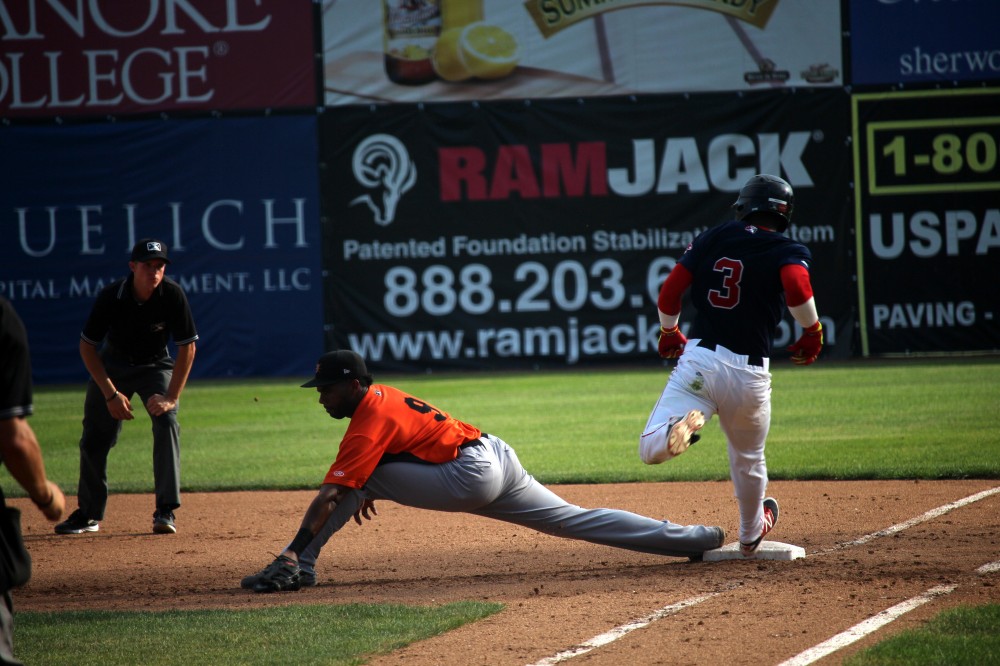 Jordan Betts makes the out at first for the Red Sox. 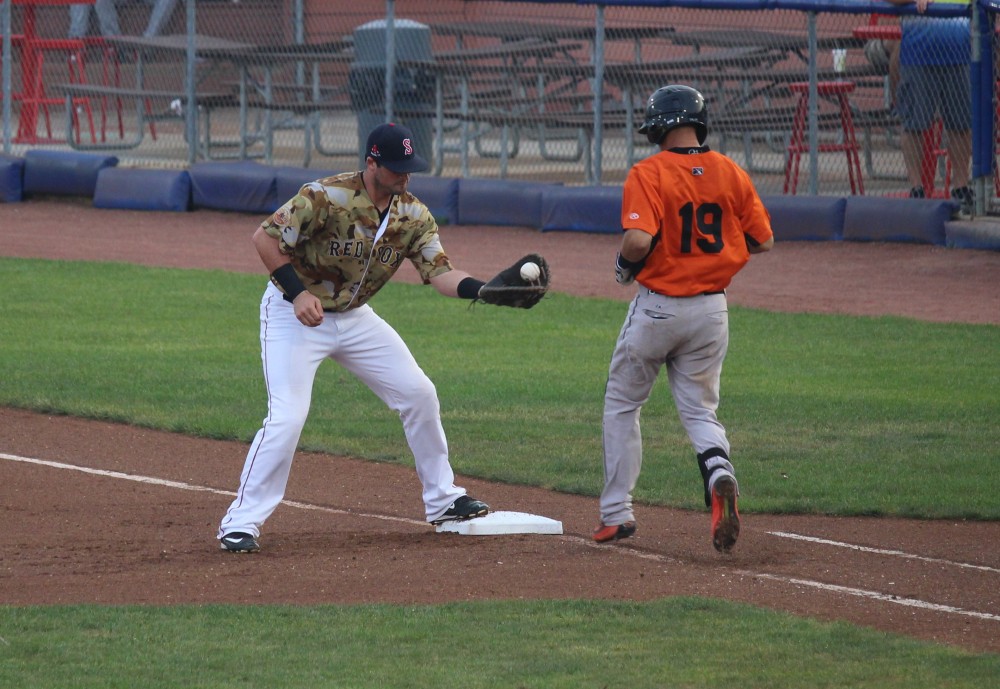 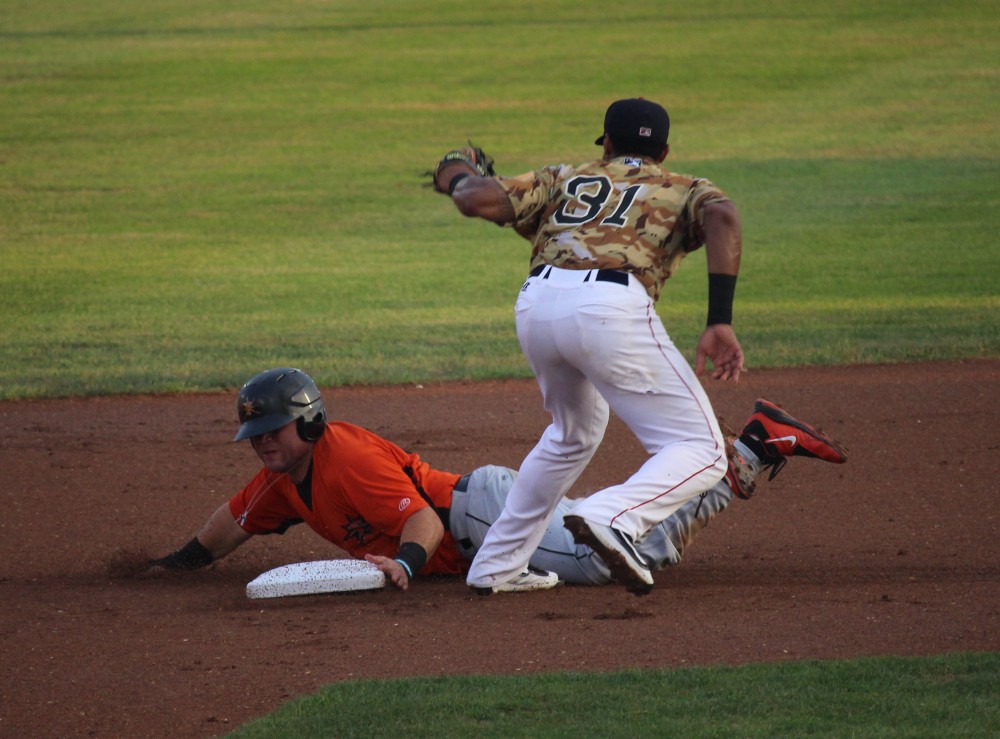 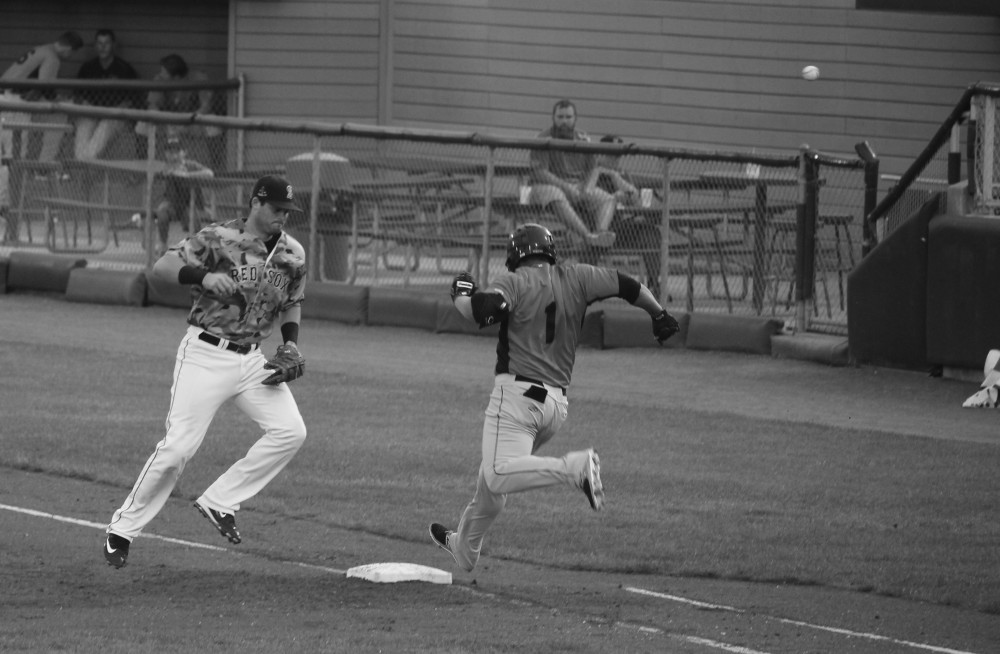 While I may never make it to Boston, I certainly got a tastes of good southern hospitality with the Salem Red Sox. A great way to spend a hot August night in southern Virginia!