I am actually surprised at how difficult it has been to get this blog published. Normally after a game Saturday night, I will either drive home if it’s under 4 hours from home, or spend the night, get home at a decent time Sunday, and bang out the blog by Sunday evening. In the case of last weekend’s game in Daytona Beach, I did spend the night, but flew home and was back home by 1PM. Why was this post so hard to write? Then it hit me: how does one do a write up on THE BEST PROMOTIONAL NIGHT EVER?!?!

The first time I saw the ad for it, I knew I had to go: Bob Ross Night in Daytona! Already in my mind, I knew this was going to be SOME promotion! Sure I live 900 miles from the Tortugas, but I had to be a part of this. As game day approached, news of the Bob Ross night was spreading like wild fire and even made ESPN. I decided last minute to fly down, through Orlando, so I would be fresh and ready to paint! And I have to admit up front that the art class, the promotion, and the team did not disappoint! The Tortugas brought in a certified teacher from the Bob Ross company , Doug Hallgren, to lead us on a 90 minute happy journey through the world of painting. Roughly 100 of us settled in and Doug and his team walked us through creating our masterpieces. Early in the process, I realized why I am a corporate finance geek by day and not an artist. But that didn’t keep me from having a fantastic time!

All of my fellow artists, along with Doug 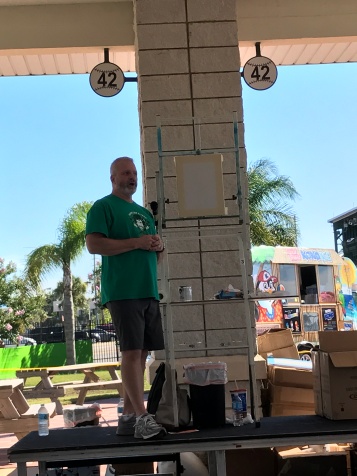 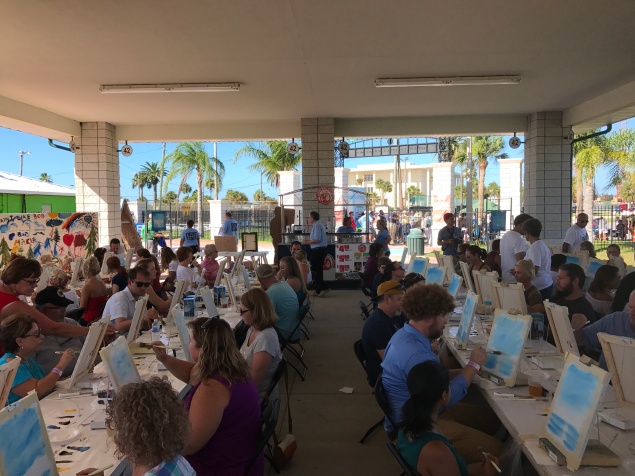 Bob and I getting ready to paint! 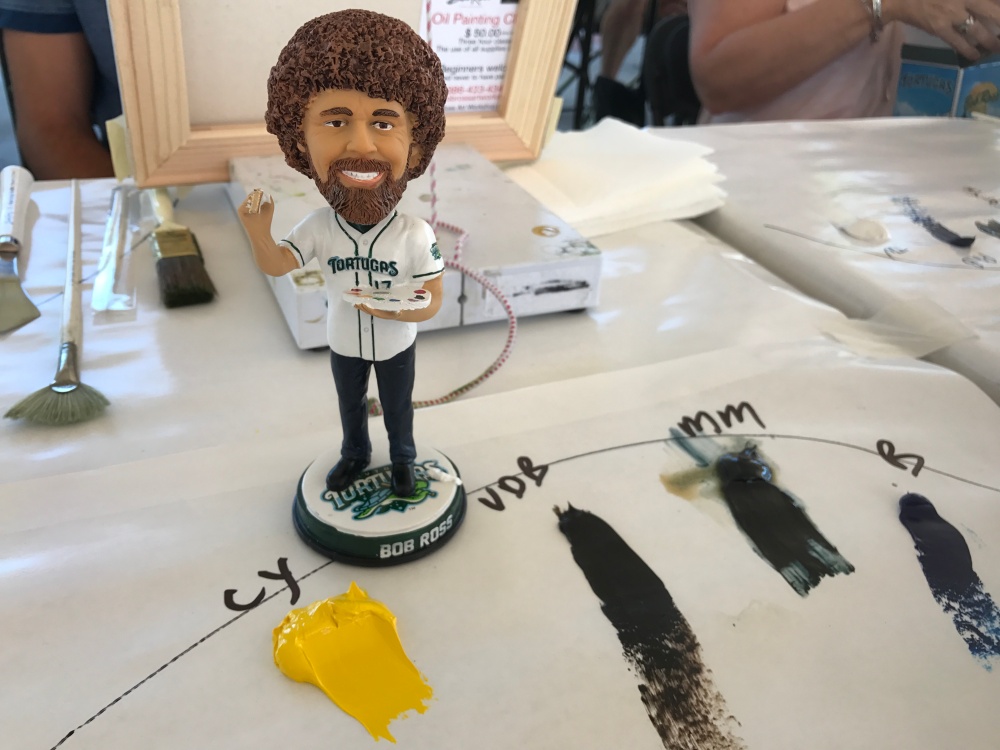 Slowly my canvas took on some color and my artwork slowly began to take shape. At this point I wasn’t sure if I was in a Bob Ross class or a Salvador Dali class. I just couldn’t get it to look right but I kept at it! 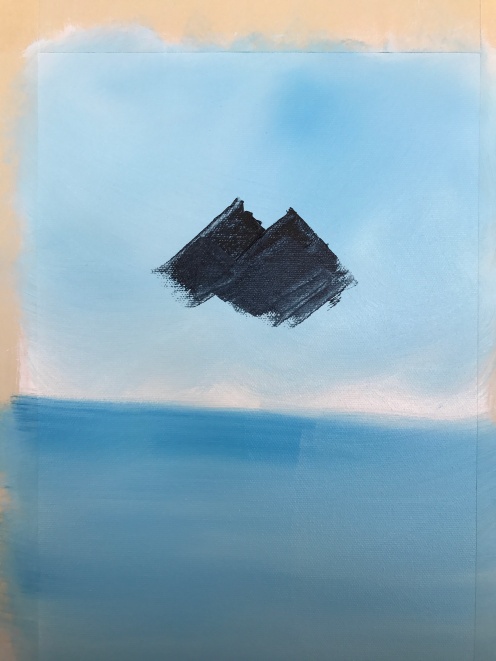 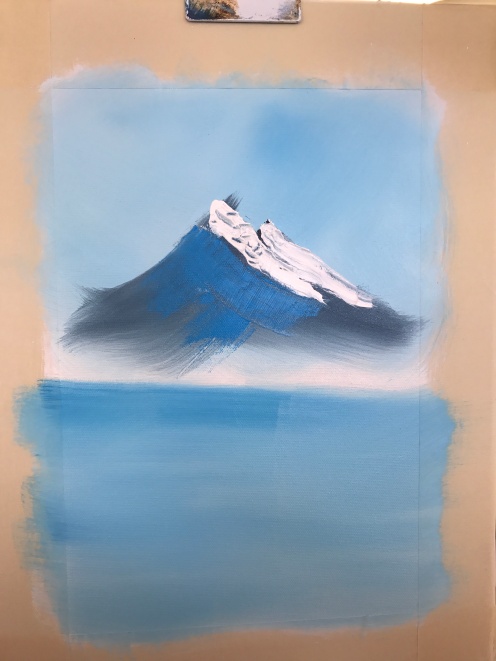 Doug and his group were awesome teachers, very patient and very willing to help us with our mistakes creative ways of doing things.

I admit, I did have some help along the way.

About 6PM, while still painting, I got to have a quick conversation with the Tortugas’ radio announcer, Kevin Piel. I told him I had traveled over 900 miles to be a part of this, and when I first saw the flyer on Twitter, I knew I needed to come down. We chatted for a couple of minutes, and he even recorded part of our conversation so he could play it on the air later. What a cool guy! I wish I could have heard myself but maybe next time!

Across the table from me sat Laura and her mother, Barbara. Laura was there celebrating her birthday. What a cool way to spend your big day, painting and baseball. It doesn’t get any better than that!

We wrapped up just after 6:30. I have to say I really liked my painting. Was it nearly as good as Doug’s? Heck no! But it will look just fine on my wall at home and I can say that I did it! 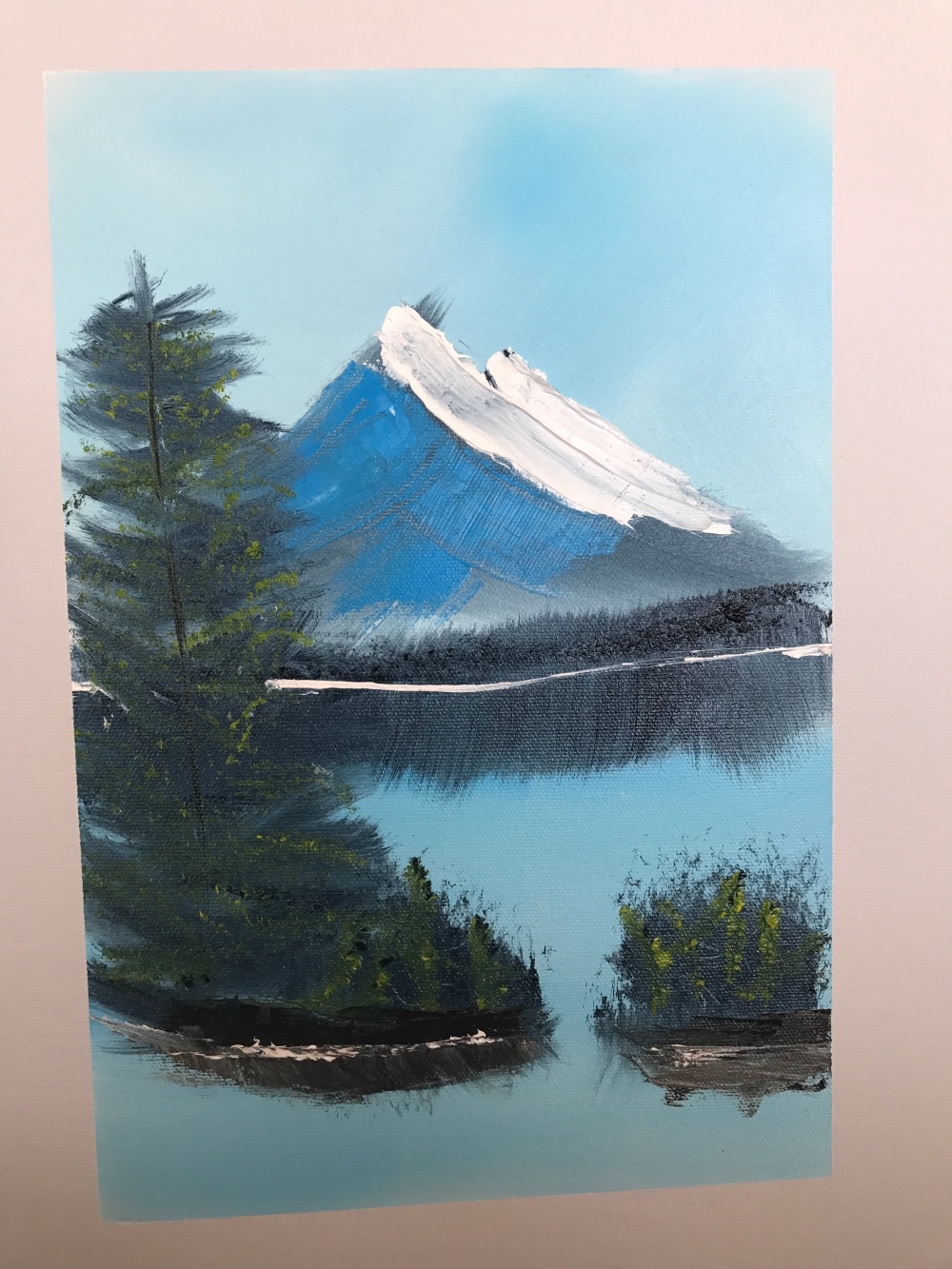 In the few days leading up to the game, and even on game day, I was exchanging tweets with the Tortugas. During the class, they said they would love to say hi when I was done. I said I’d love to, but unfortunately we didn’t get a chance to hook up. But thanks for the offer guys. Next time for sure! You were very gracious hosts!!

City Island Ballpark first opened in 1914, but didn’t have a full time tenant until 1920 when the Class D Florida State League was established. Daytona hosted a team for 8 years, then again starting in 1936 as a Cardinals farm team. The Islanders played through 1941, but play was suspended at the onset of WWII. When play resumed in 1946, the Islanders became a farm team of the Dodgers. While only in the Dodgers organization for just one year, they had a lasting impact on professional baseball. Due to segregation laws in the south, Jackie Robinson was not allowed to play games in Jacksonville nor Sanford, so when the Montreal Royals were set to play the Dodgers, the game was played in Daytona Beach. That game was played on March 17, 1946. The Dodgers later moved to Dodgertown, just down the coast in Vero Beach. But City Island Ballpark, and the city of Daytona, will go down in history.

All around the ballpark are historical signs and markers about Jackie and segregation in the south. It’s truly a living museum. 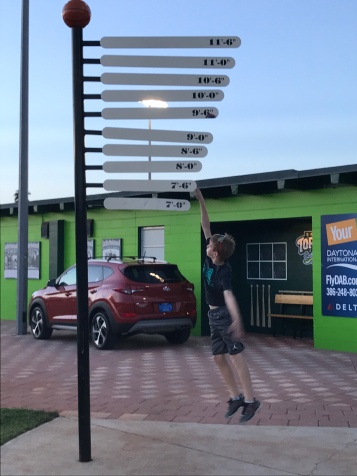 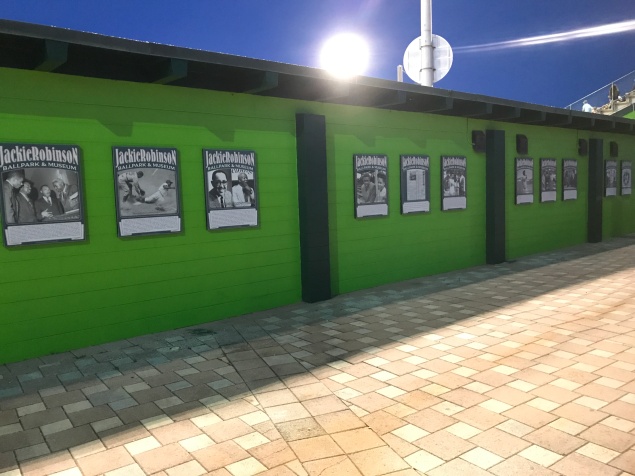 In game experience and food

Since it was Bob Ross night, you can imagine that most of the between action games centered around Bob Ross, and you would be right. Which brought a welcomed change to most of the games that take place during minor league games. There was a Bob Ross look a like contest, a “how many times can you paint the bat” contest, as well as a “painting game” that challenged artists to draw their best squirrel and have contestants guess what it was. All great fun!! 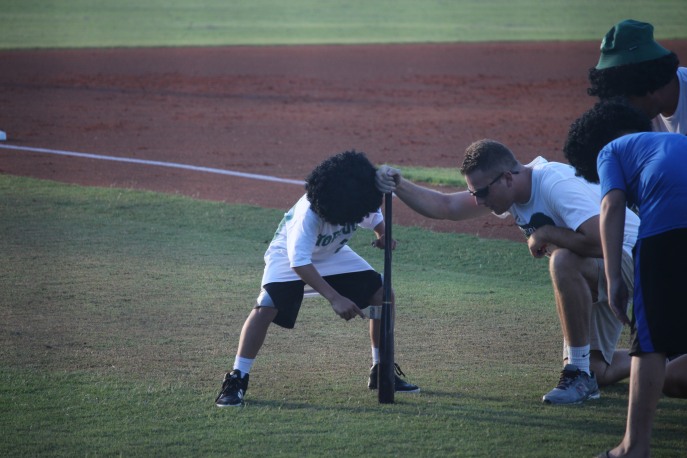 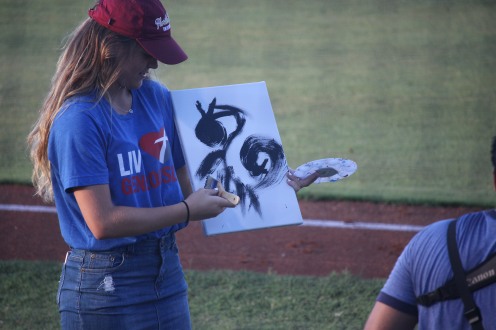 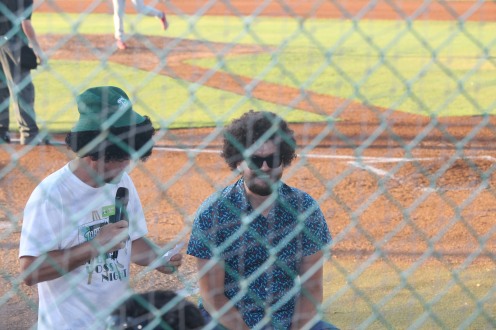 Even the 50/50 raffle took on a Bob Ross life of its own. For $50 you could purchase 403 “happy tickets”, which was the number of “The Joy of Painting” episodes that Bob Ross hosted! 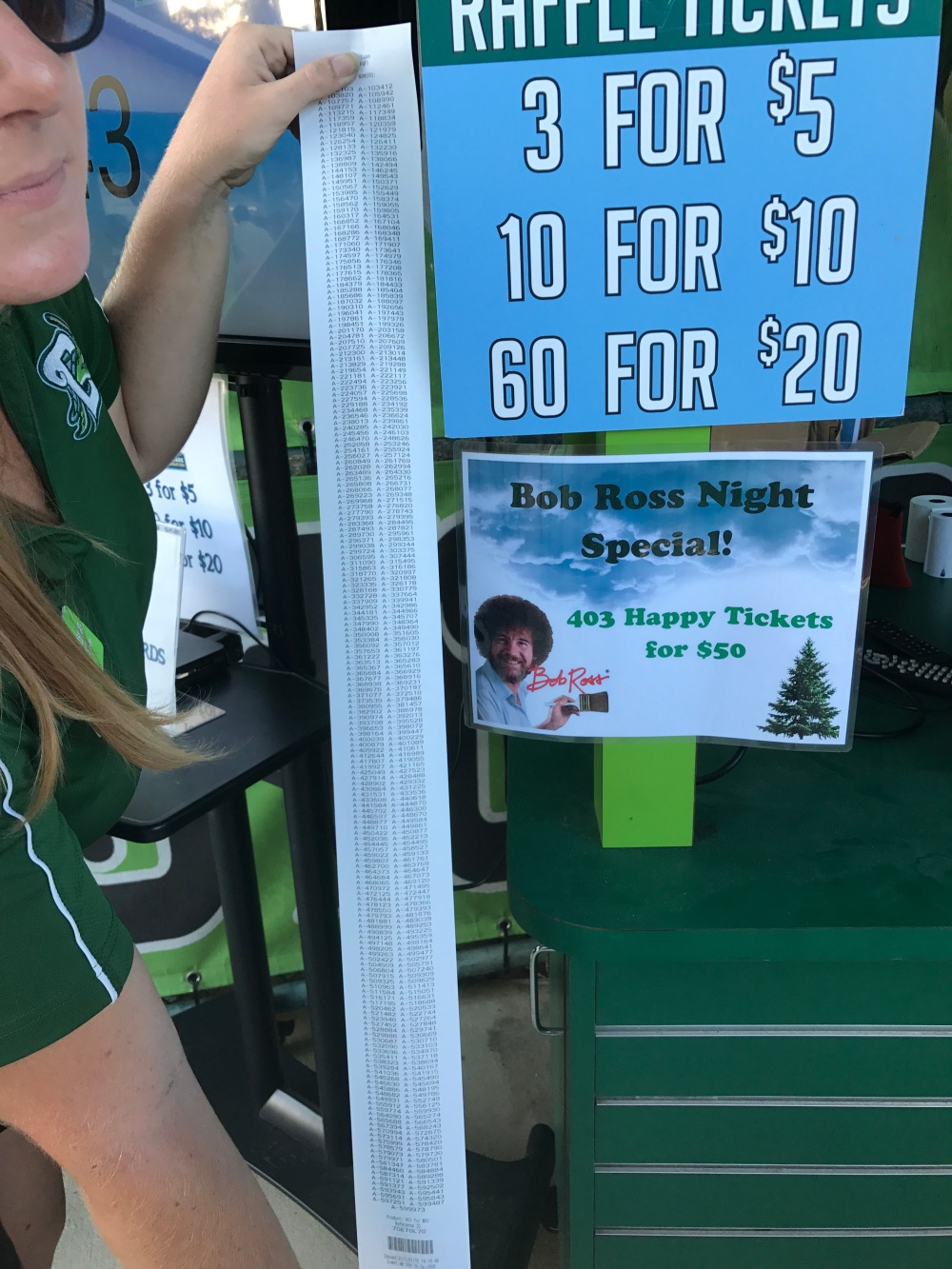 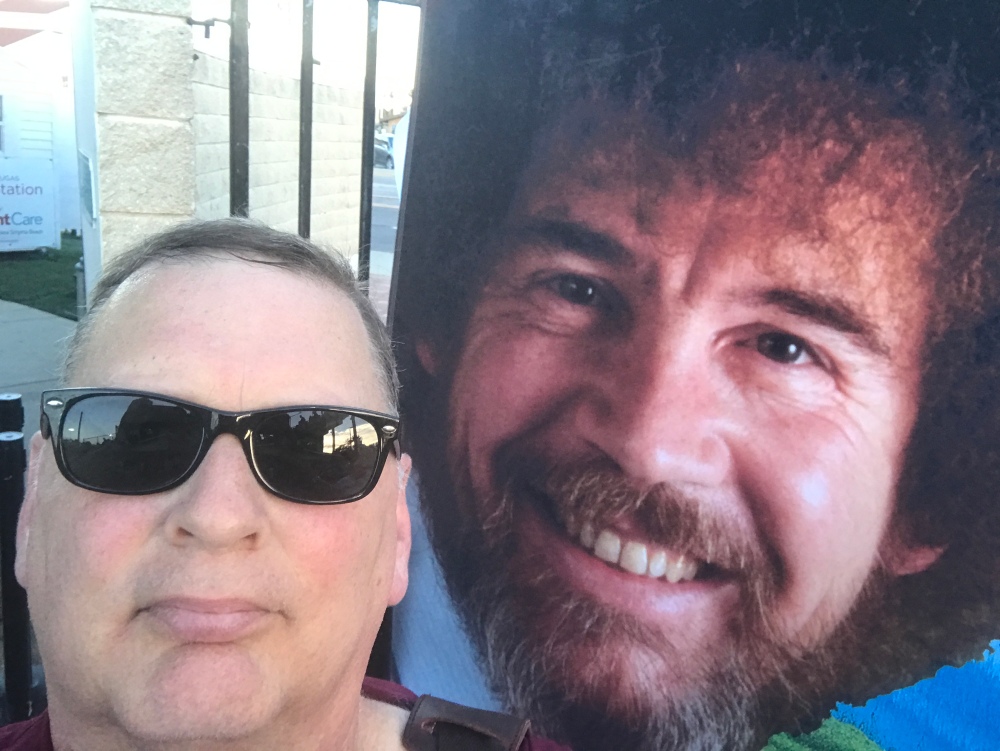 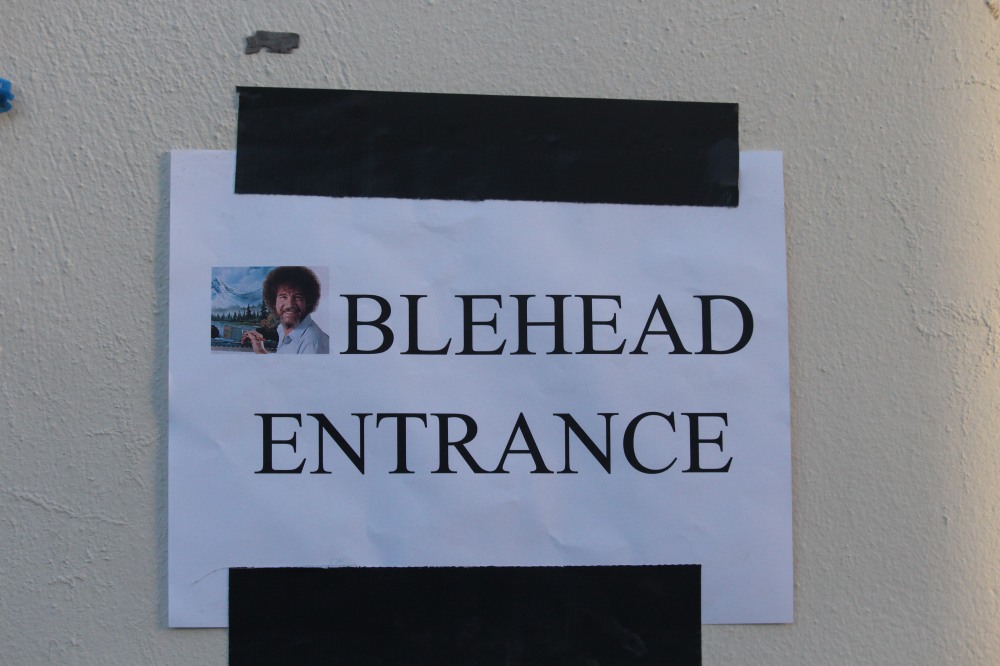 The Tortugas even had a special Bob Ross waffle for the evening!

Speaking of food, the Tortugas made the best of their small concession space with some nice specials mixed in with some fan favorites.

I waited too long to order the Shell Rocker Burger, which is a 1 lb. burger with pulled pork, bacon, and cheese on a pretzel bun. They had sold out by the time I got to eat! But fortunately, a Twitter follower of the Tortugas, Noel, posted what this creation looks like!

Every game I go to, I say I want to order a helmet full of nachos, but my waistline (and doctor) think better of it and I pass. At just $12, it would have made a great souvenir, but this time around I didn’t have room to take it with me. I did run into a fan who had ordered this. I am now regretting my decision not to try them! 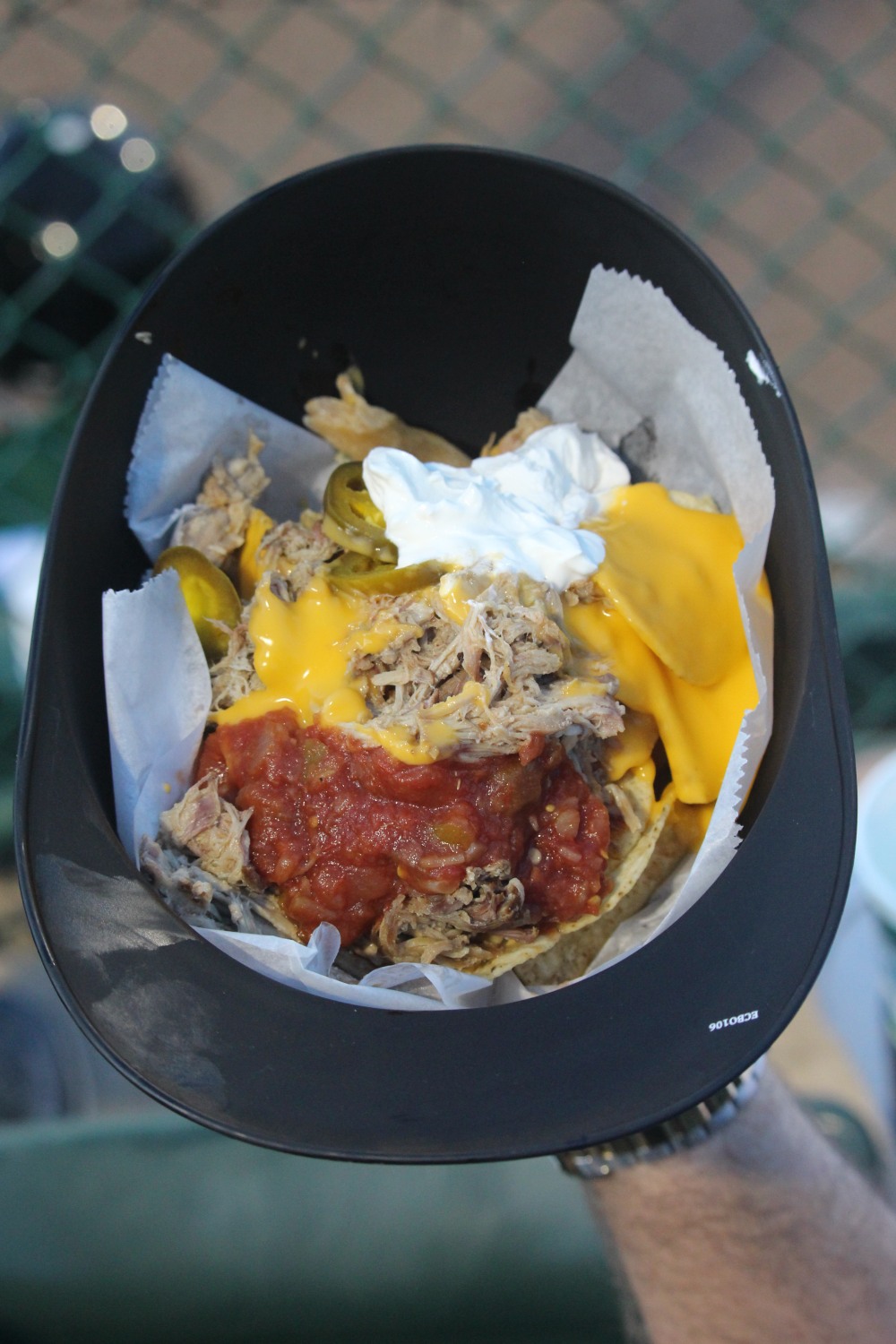 When I did have time to eat, I settled in with a freshly made Philly cheesesteak. I have to say it was really good!! But next time I am heading straight for the helmet nachos!

The Jack also has plenty of beer and drink options as well.

Radiology Associates Field at Jackie Robinson Park, as it is officially called, is an intimate park, seating just 5,000 fans. While many of the seats are general admission, backless seats, it does have three sections of reserved seating with backs. With various renovations over time, they have added picnic areas and special event seating, but it hasn’t lost its old time charm, included some obstructed views with steel beams supporting the roof. That said, it is a perfect place to see a game and feel like you are in a throwback stadium.

They even added a nice party deck out in right field. 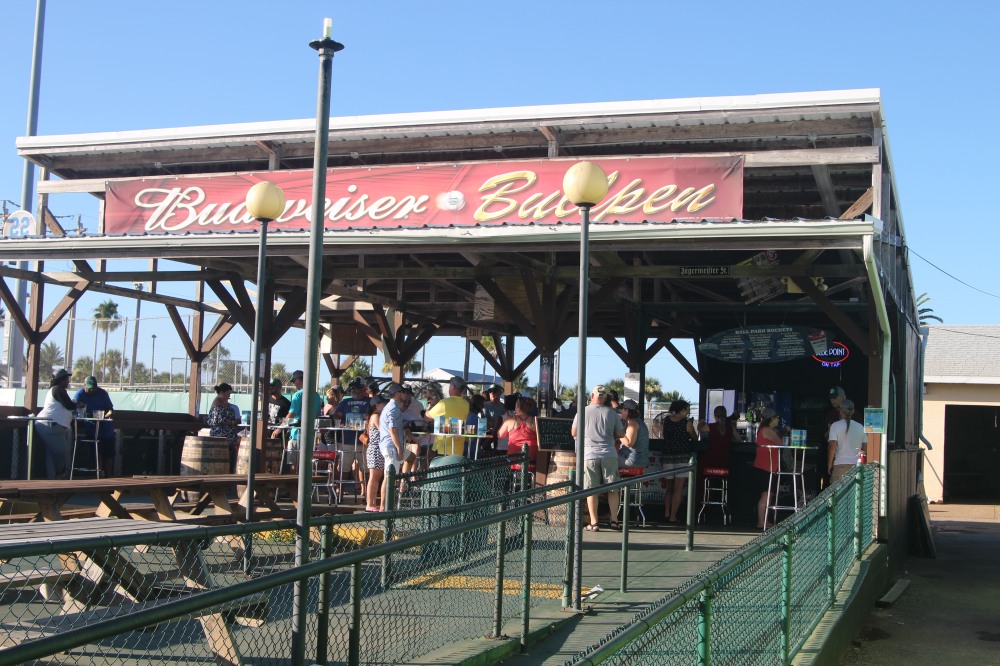 In my opinion, one jewel of this stadium is their totally hand operated scoreboard. Not only are runs, hits, and errors added by hand, but for balls, strikes, and outs, someone actually flips lights on and off. When is the last time you’ve seen that?!?

The Jack has protective netting that runs almost the entire length of the infield, which in this day is becoming standard. While I see the need to protect fans, it does wreak havoc on anyone trying to take action photos. I think overall it’s a safety feature I can live with! While it prevented me from getting some great action photos, I was able to capture a few good shots of the game. 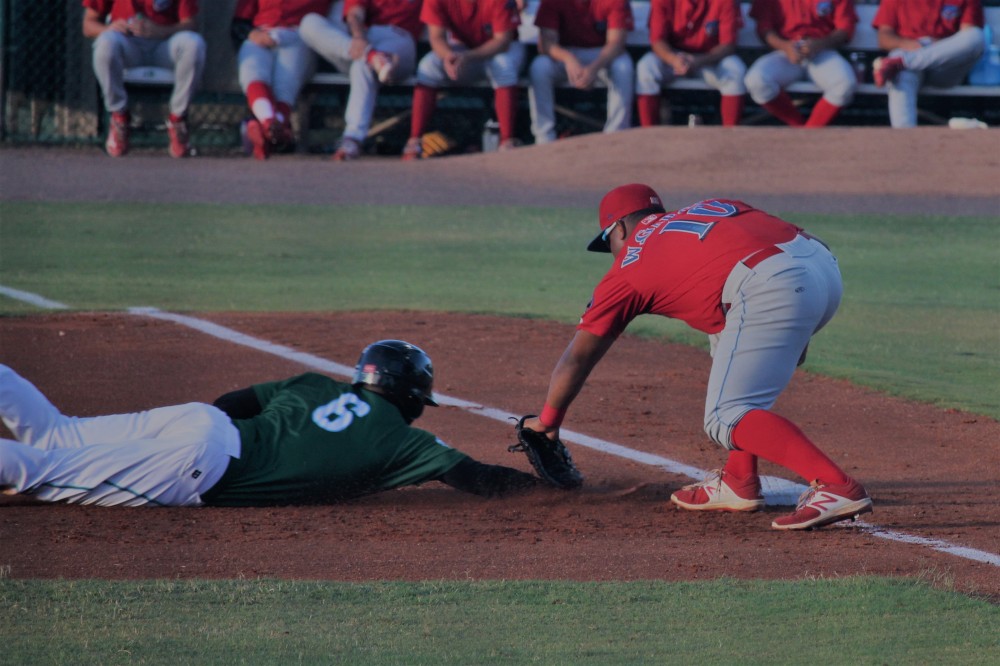 Unlike my Twitter buddy and professional Minor League Baseball blogger Ben Hill, who tours baseball stadiums as part of his job, I’ve been at this for just three years now. In those three years, I have never been to a more exciting promotional night than Bob Ross Night with the Daytona Tortugas. It strikes a great balance between hometown minor league ball and the professional game that is Minor League Baseball. I can’t wait to return just as a fan! If you find yourself in Daytona Beach for spring break or a summer vacation., you need to stop by for a visit to see the Tortugas!