Just as a preface, I did not see Ebby Calvin, Crash, Annie, or any intentional beanings of the Durham Bulls mascot. What I DID see was a fantastic stadium, great food, friendly fans, and more micro brews that even I thought was imaginable.

Most folks, like myself, associate the Durham Bulls with the aforementioned 1988 baseball classic, “Bull Durham”, which takes place in sleepy little Durham, NC and the games are played in the backdrop of the old Durham Athletic Park (DBAP). I did level set my expectations, though, before driving down to Durham. The fictitious Bulls played in the Single A Carolina League (where the Bulls were assigned 30 years ago), whereas the current Bulls are now in the AAA International League and just one step away from their parent team, the Tampa Bay Rays. And Durham is anything but a sleepy little town these days! While they team does embrace their cinematic history, they have build their own legacy as a top notch place to see a game!

The Bulls play in Durham Bulls Athletic Park, and the surrounding area and walk up are very impressive! Built in 1995, it’s now the centerpiece of the American Tobacco Historic District, flush with office buildings, restaurants, and residential space. The neighborhood was very clean and vibrant, and still hopping after the game was over! 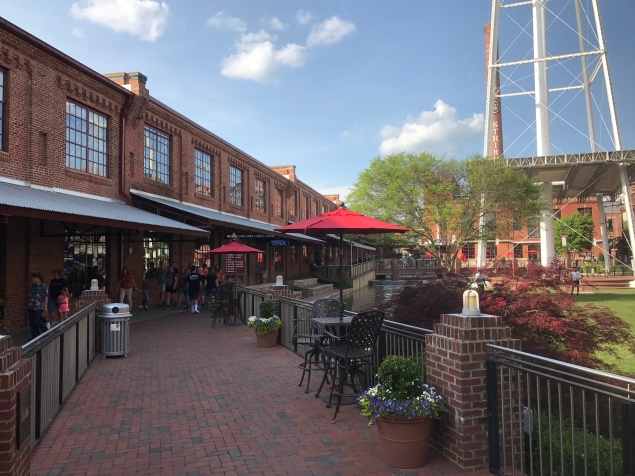 While these aren’t your father’s Bulls, they enthusiastically embrace their past. Along the sidewalk outside the stadium are tributes to past stars that have played in Durham over the years. And yes, the Durham team goes back beyond just the Bulls of the 80s and movie fame. They can trace their roots back to 1902 whey they were the Durham Tobacconists.

First stop was to the gift shop. Wow! This is as good as I’ve seen in all my travels. Anything old or new Bulls related, and on par with any major league shop. The only thing missing was the fitted cap in my size that I wanted, but still managed to come away with a shirt and a cap!

There are all kinds of delicious beer, food, beer, and bbq choices in the park. From the moment you hit the concourse, which is plenty wide and can handle a large crowd, you are met with great choices of food options. Standard fare, as well as bbq.

I also sampled some local jerky from Two Brothers Jerky. They were giving away free samples, and it was awesome! While I didn’t buy a bag at the park, I did grab their flyer and they ship! I think I know what my next online order might be! It’s really good and available at a number of locations in the Raleigh Durham area, so next time you are in town, look for it! 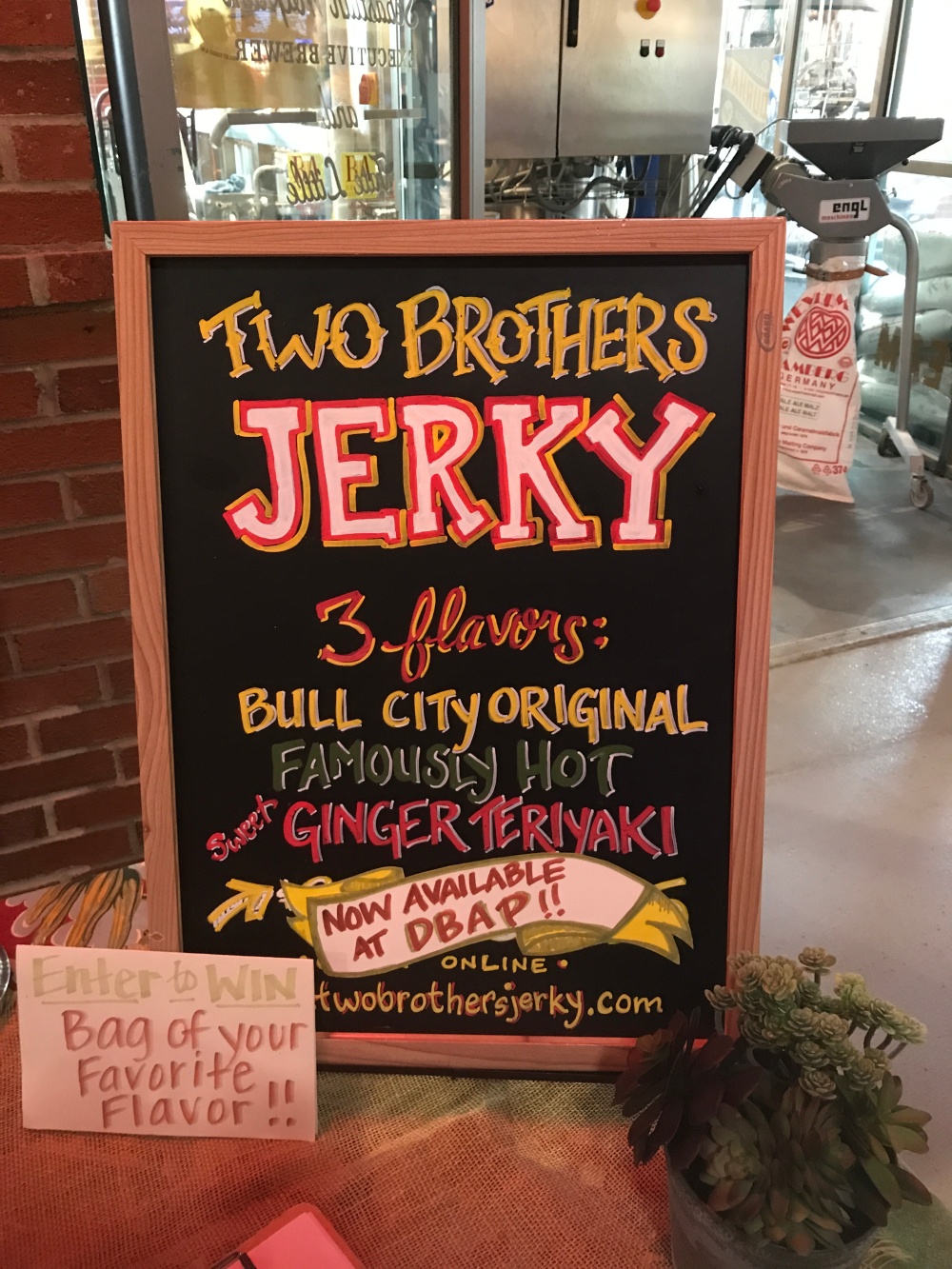 One very popular spot was Gonza Tacos y Tequila. I wish I had stopped there, but to be honest, the line was too long. I did see some of their fare that fans were having, and I might have to go back just for that!

I wanted to get to my seat, so my first round was typical ball park fare. Who doesn’t love peanuts and a craft beer served in a souvenir mason jar?

Later in the game, I decided to get BBQ. Hey, if you are in NC, you are going to get good BBQ, right? This was NO disappointment. I went for the platter (for a measly 10 bucks!), and honestly, it was more than I could finish! Definitely hit the BBQ down the first base side. 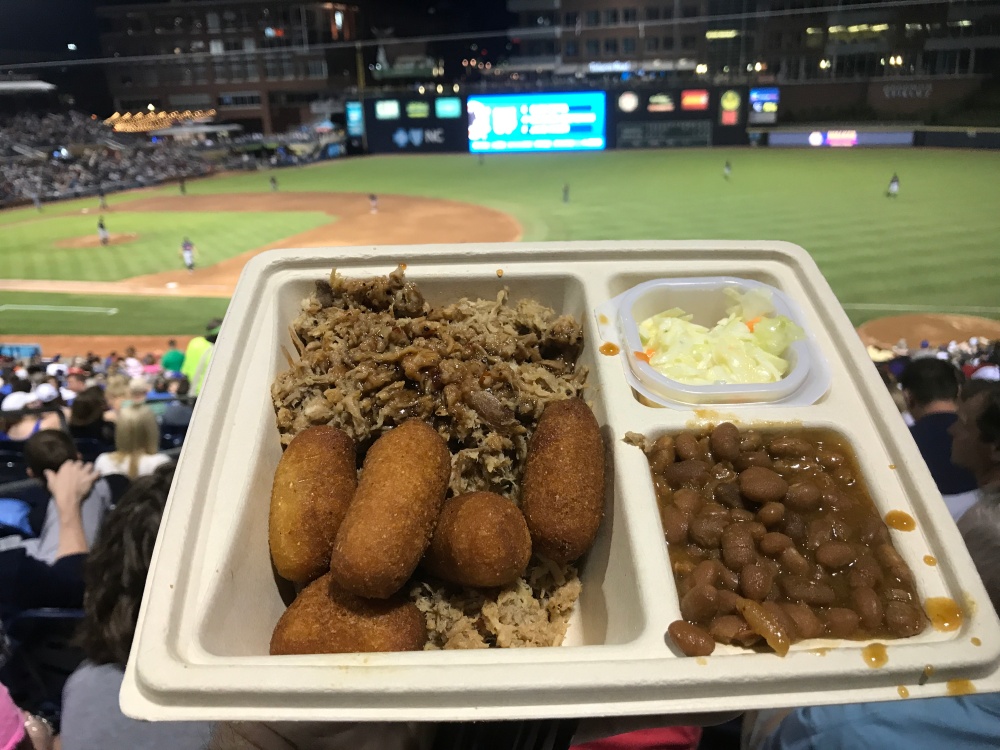 I passed on dessert, but saw a couple of pretty good options! 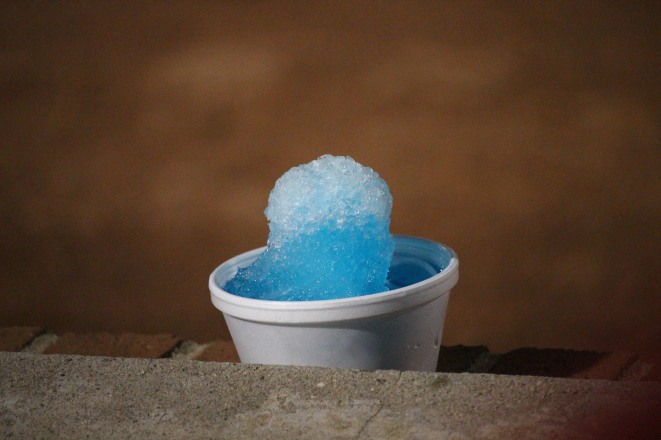 Did I mention the beer choices? North Carolina is quickly becoming a hot spot for craft brews, and I think DBAP must have had every craft brewery from across the state on tap! An amazing selection! 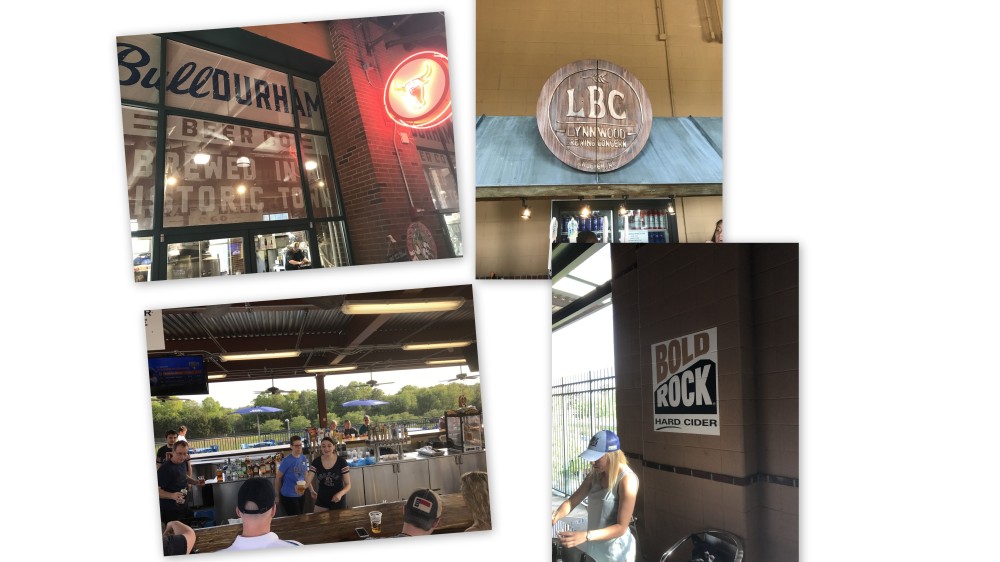 There’s also a full service restaurant just over the left field wall and if you are lucky enough to get an outside seat, you can still see the game! 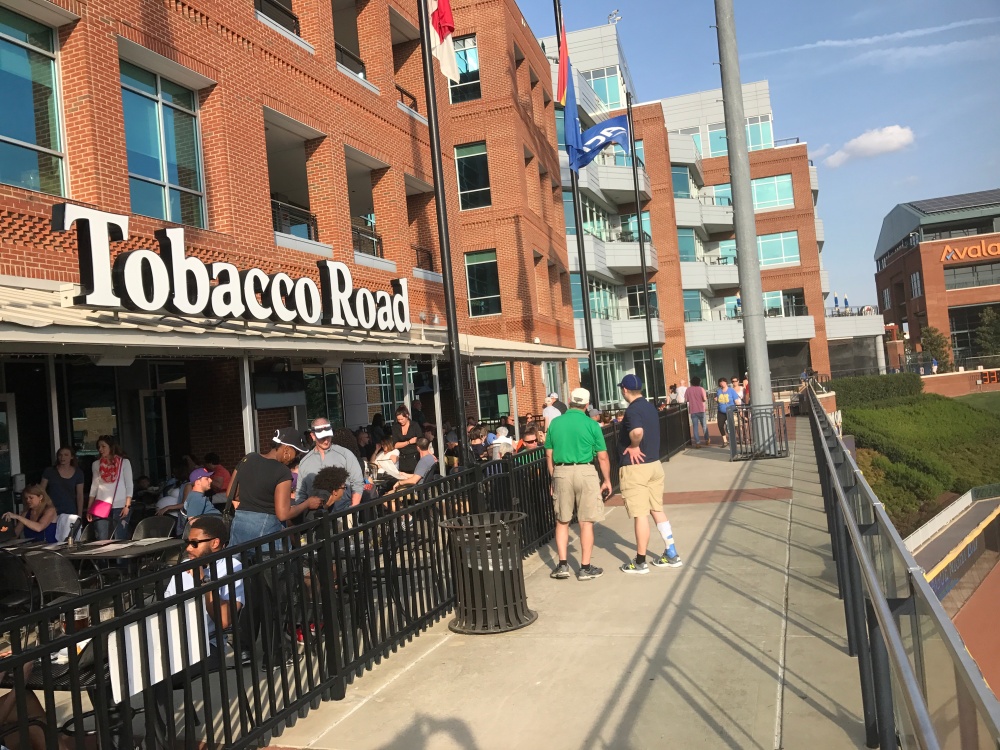 Since it’s a relatively new (22 years old) stadium, every seat seemed to offer great views of the action. From very comfortable box seats (my seat was directly behind the visitor’s dugout), to lawn seating, to views from the adjacent office buildings, there’s something for everyone! 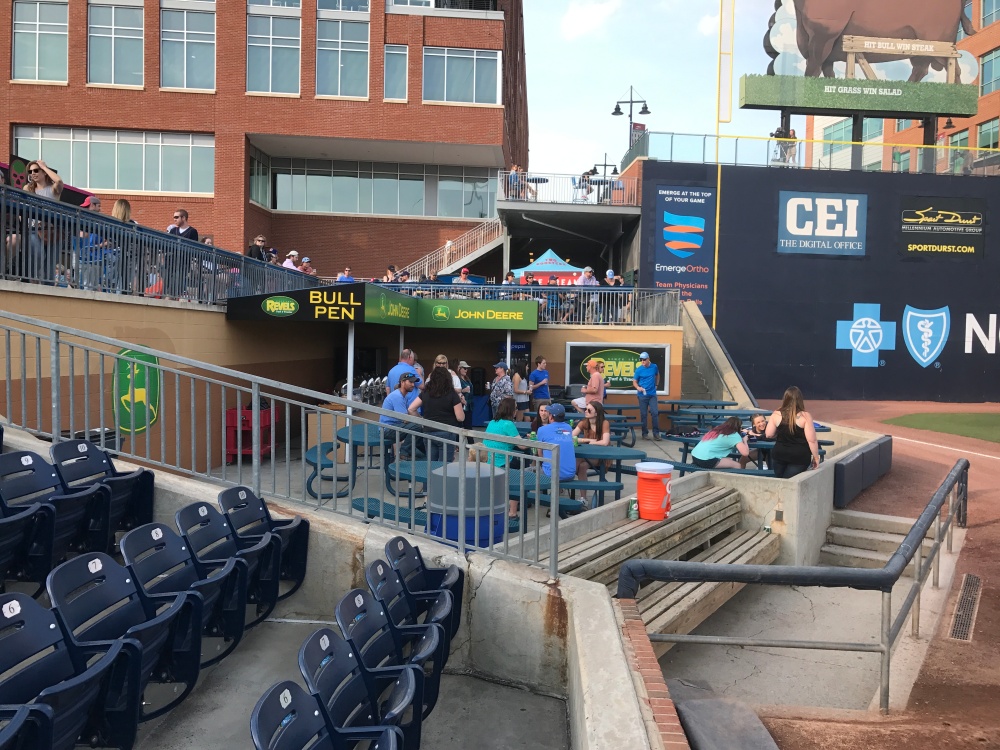 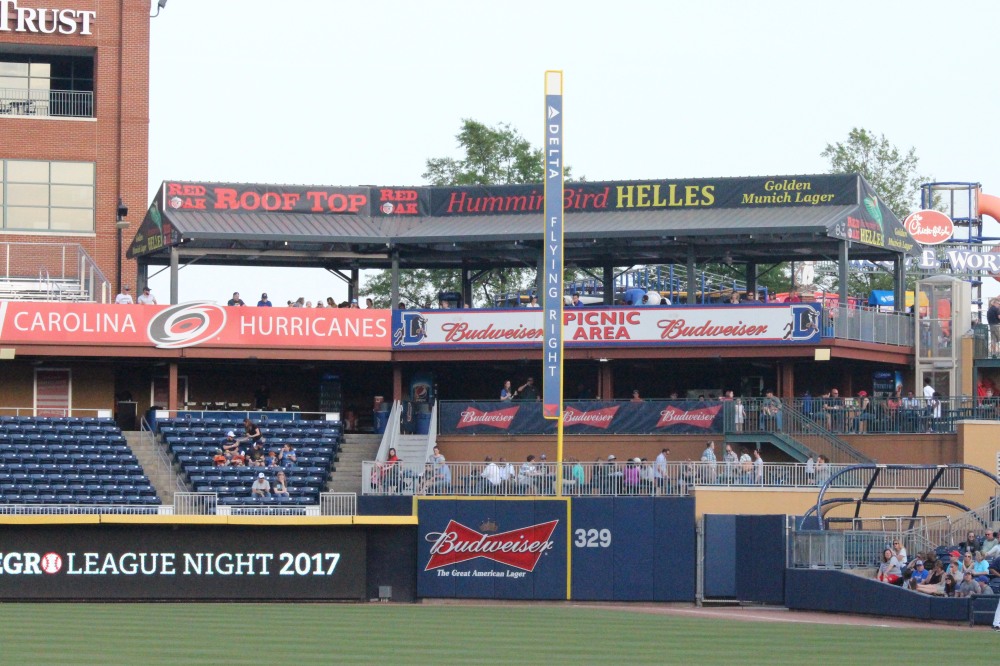 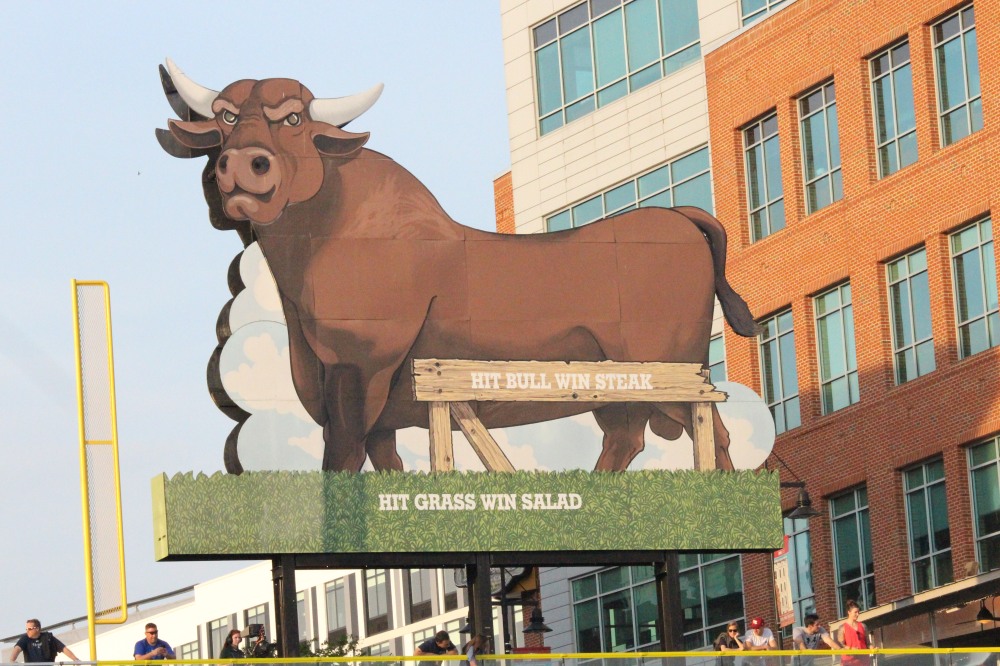 I also ran into Cody, who is responsible for posting all the K’s by Bulls’ pitchers! Great guy! 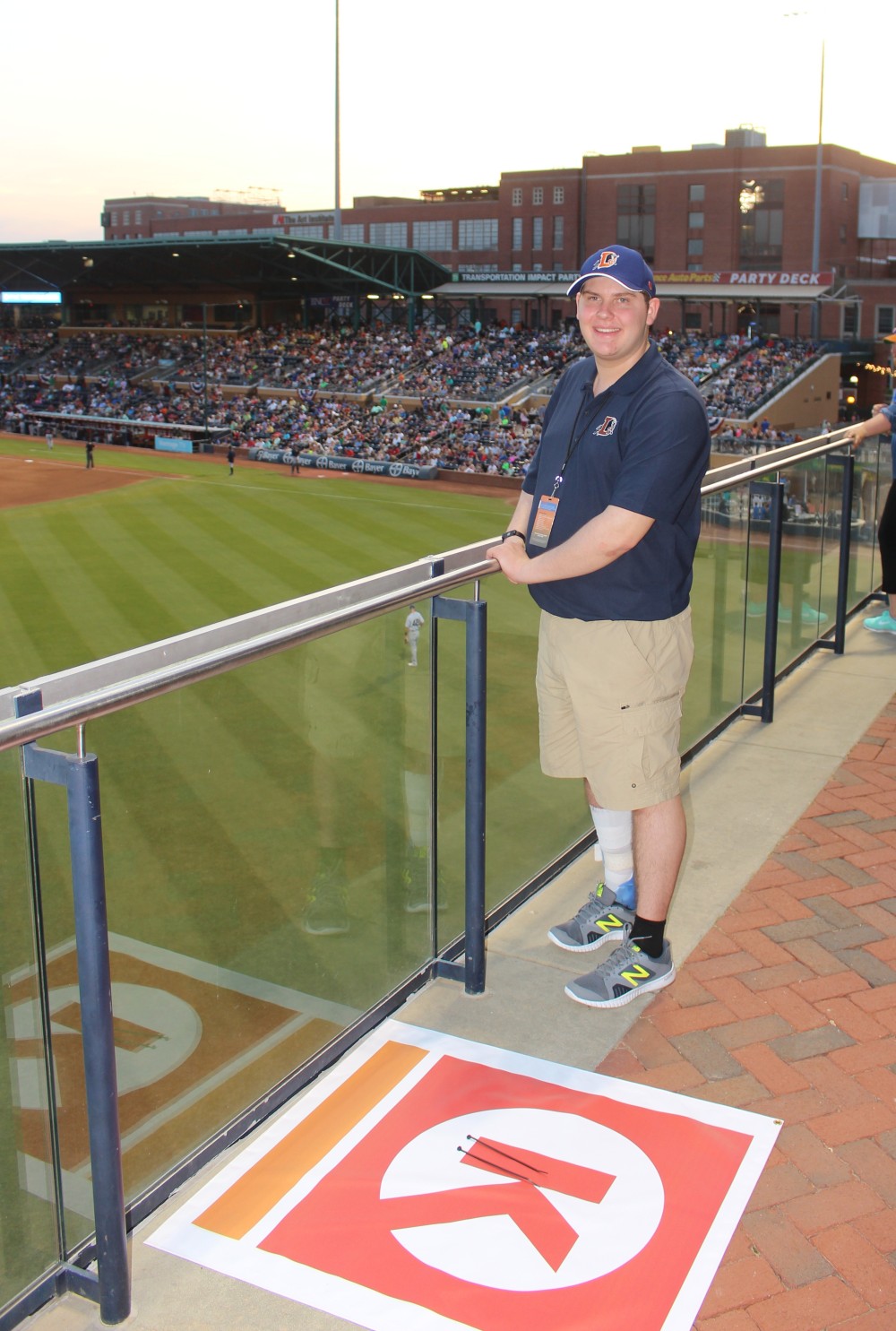 The Bulls also have the old hand operated Wrigley Field style scoreboard. I think this guy has a pretty good view!

These were not your “typical” minor league fans! Everyone I met was super friendly, knowledgeable, and very polite! I’ve been to games were some of the fans get pretty rowdy after a few adult beverages and shout at the opposing players. None of that here! A very welcomed change!! I also made friends with a couple of guys in the BBQ line, Brock and Mark. Sadly the line was pretty long, I missed the big rally by Gwinnett while waiting to get my food, but Brock and Mark and I had a great time talking baseball, Chicago Bears, and the love of the game. Thanks guys, you made the night!

In game entertainment wasn’t overkill like many minor league teams provide. It almost had a major league feel to it, but without the sanitized MLB atmosphere. A few good games, some player karaoke, a race or two, and quite a few appearances by Wool E. Bull. Boy, that guy gets around!! 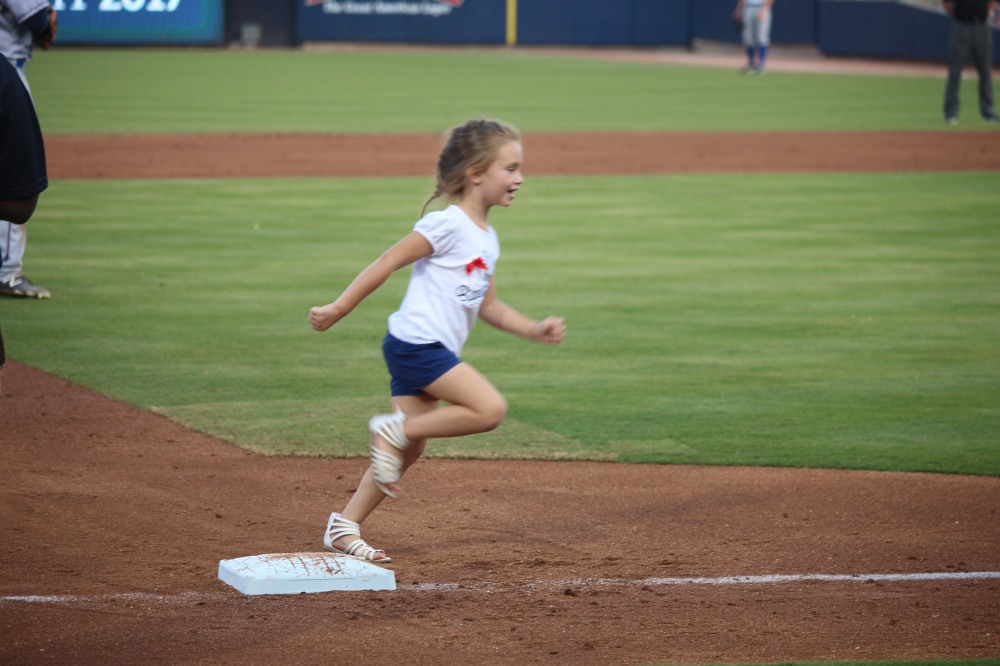 Player karaoke on the scoreboard! 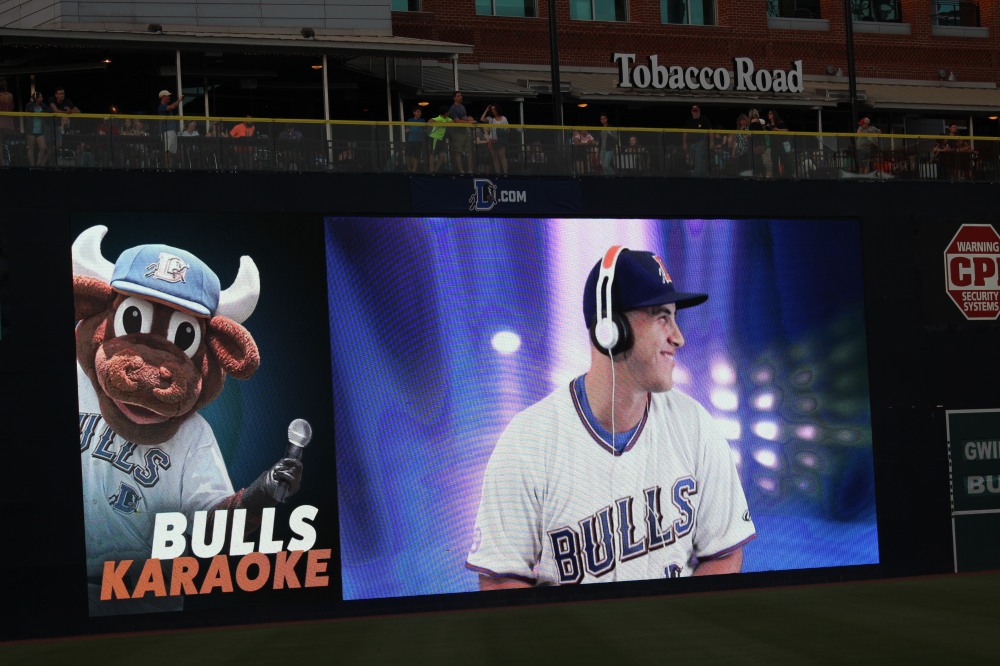 And up close and personal! 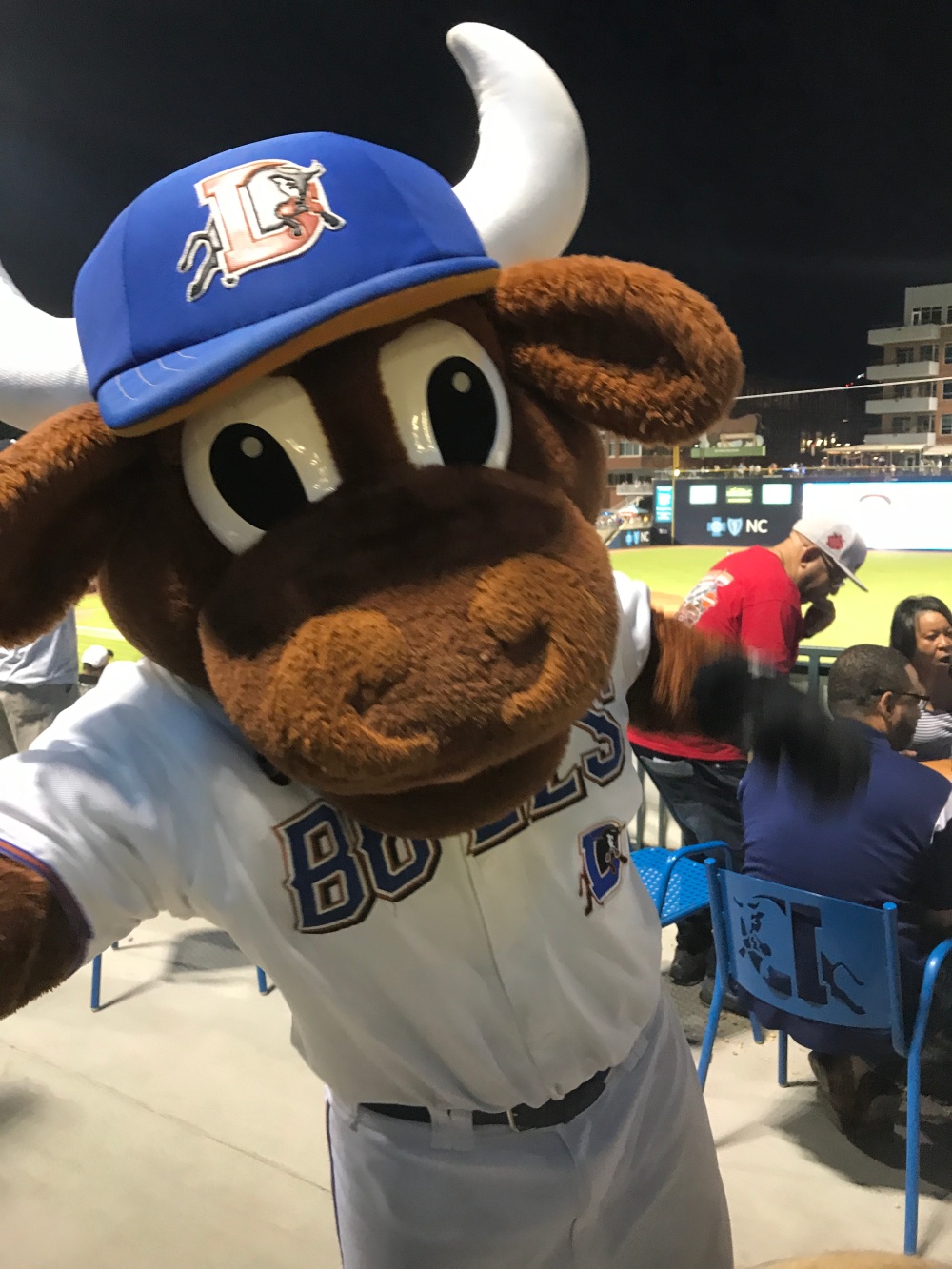 Sadly, the home team let 6 runs come across in the 4th and just couldn’t come back. While they did rally for 4 runs in the 9th, it wasn’t quite enough as the Braves took the contest 8-6, leaving 9,574 hometown fans disappointed on Jackie Robinson Night. But the action on the field was stellar! 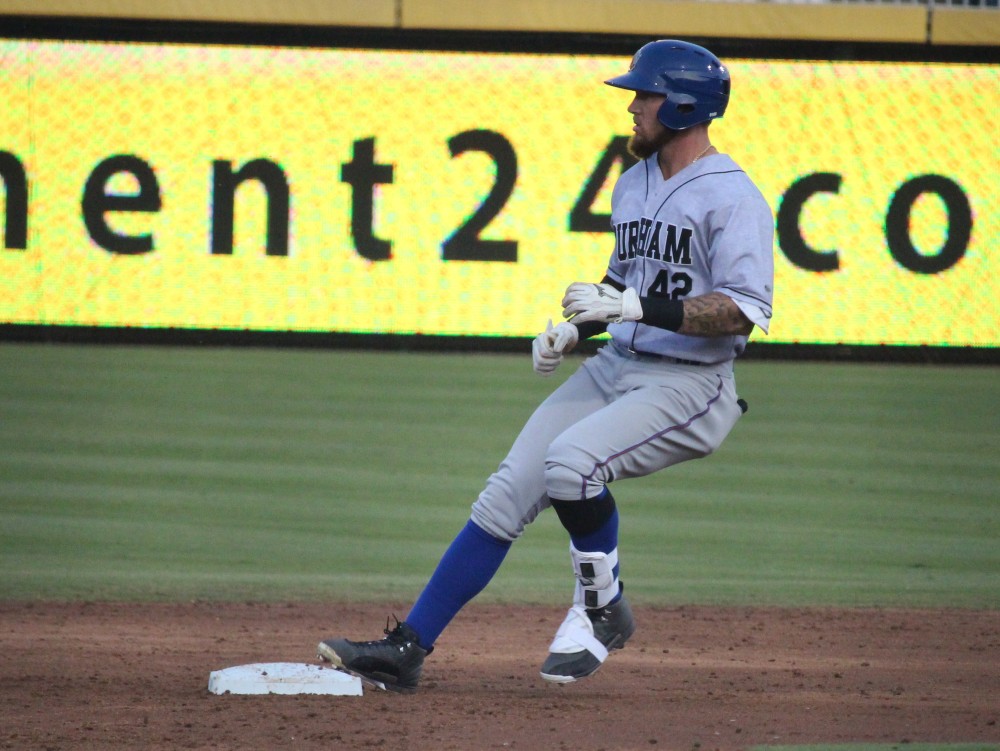 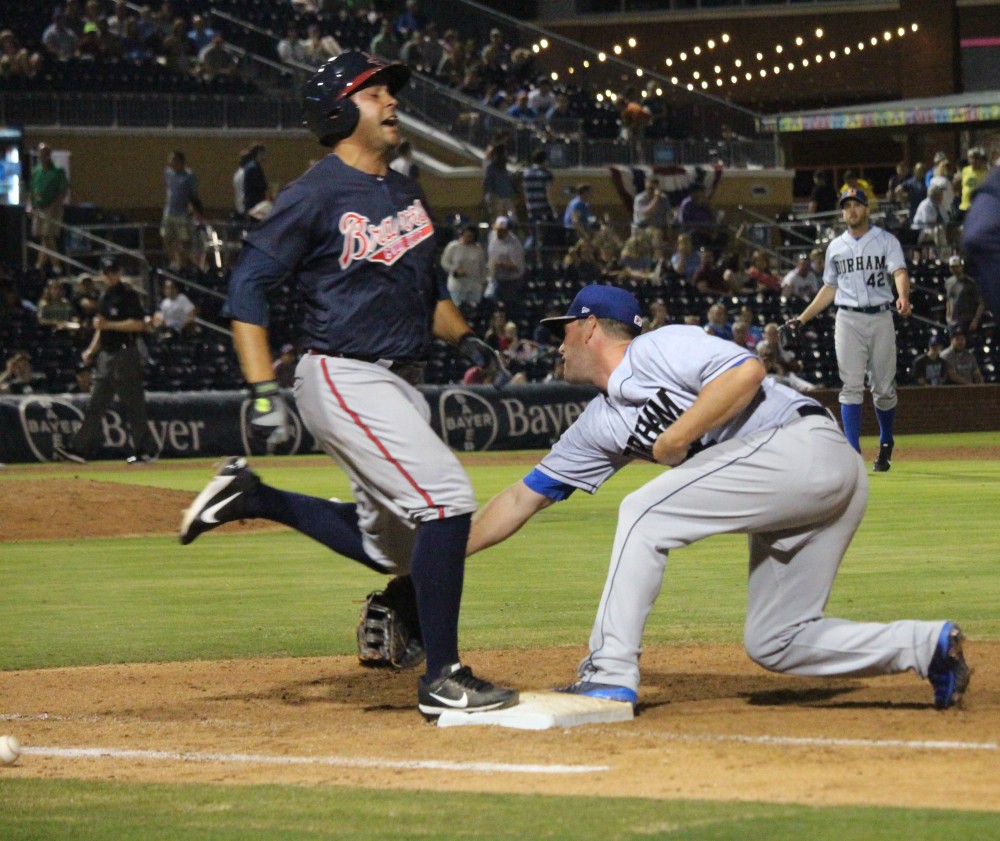 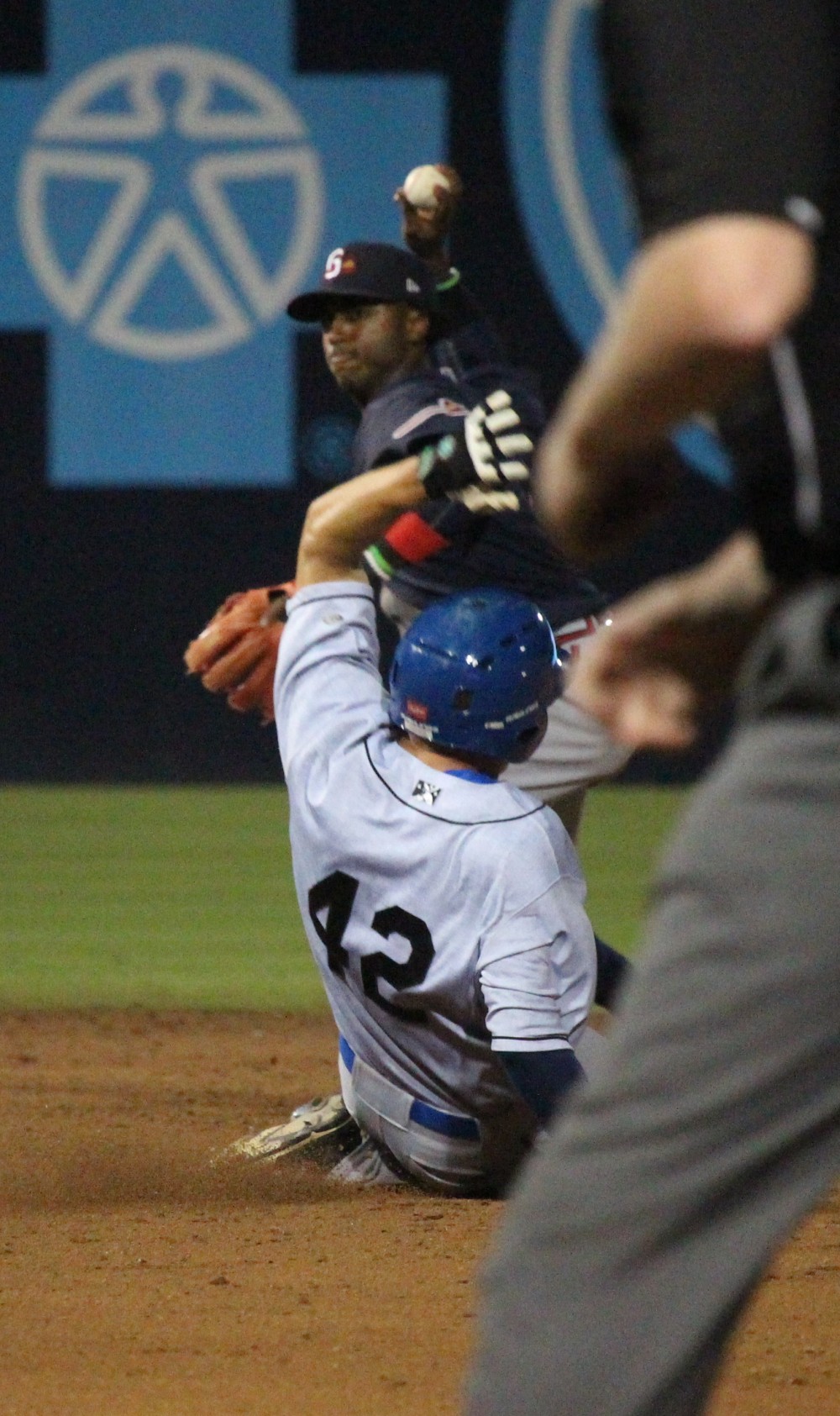 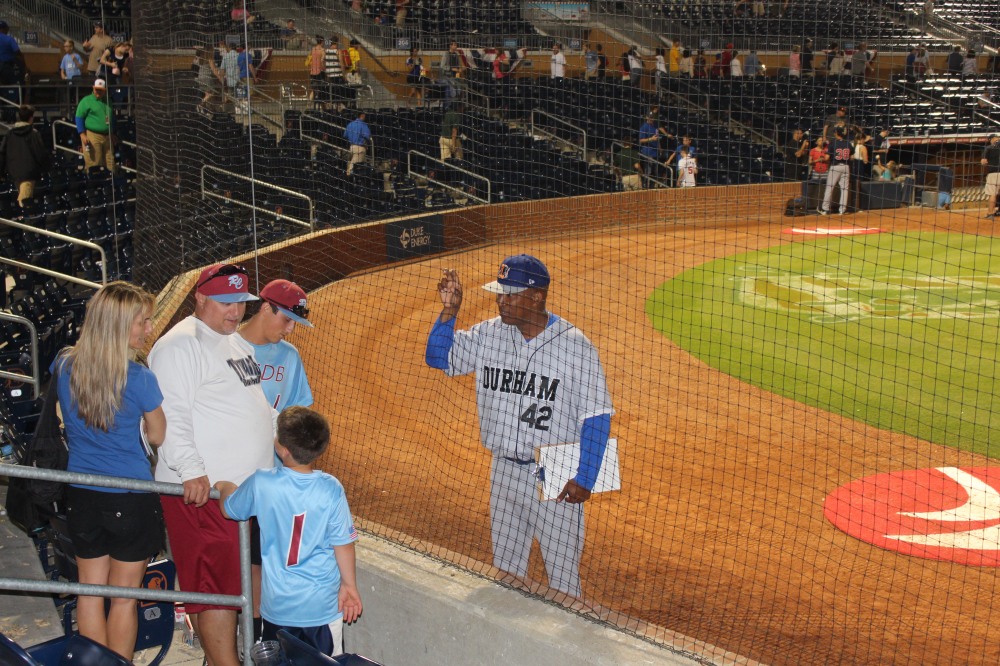 I admit, I do have a little camera envy…..

Had just an incredible experience in Durham, and while I don’t know if they opted to get Millie and Jimmy the candlesticks, MY night was issue free and fun filled!