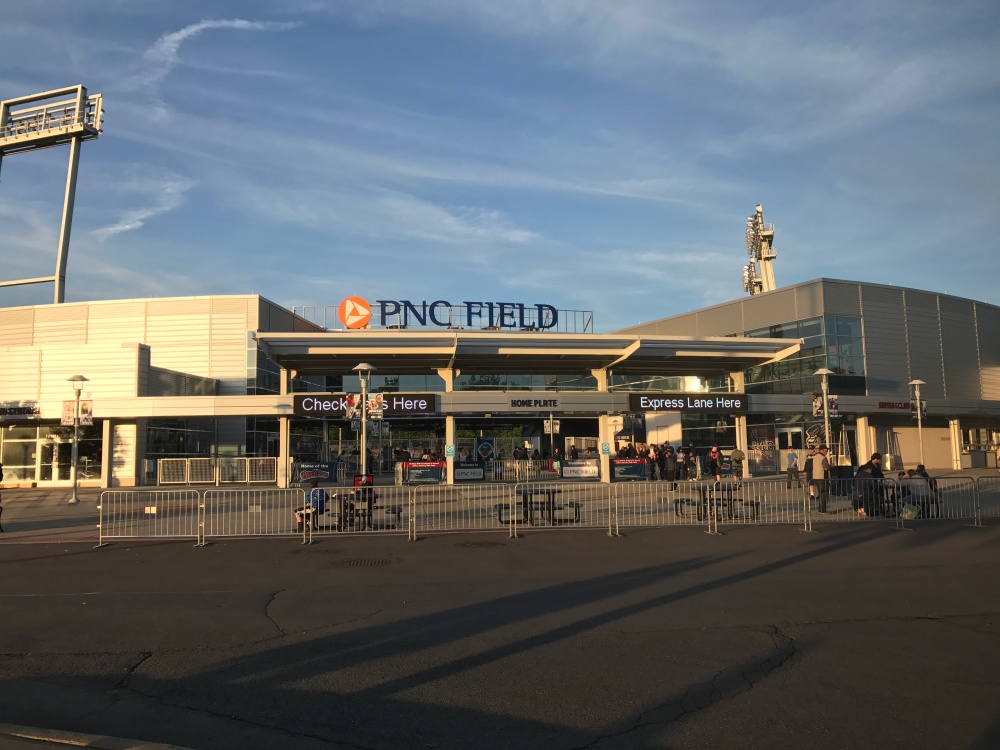 OK, so all alliteration aside, this weekend’s road trip took me to Pennsylvania again to see the Scranton Wilkes-Barre RailRiders host the Rochester Red Wings at PNC Field. I’ve seen a number of games on the US15-I81-I78 corridor, including the Fredrick Keys, Reading Fightin Phils, Harrisburg Senators, and the Lehigh Valley IronPigs. Other teams I’ve seen in PA include the Altoona Curve and the Williamsport Crosscutters (note to self: you should finally do that write up from last season!). So the RailRiders had some big shoes to fill in terms of living up to other MiLB teams in PA. And I have to say the experience lived up to all expectations! 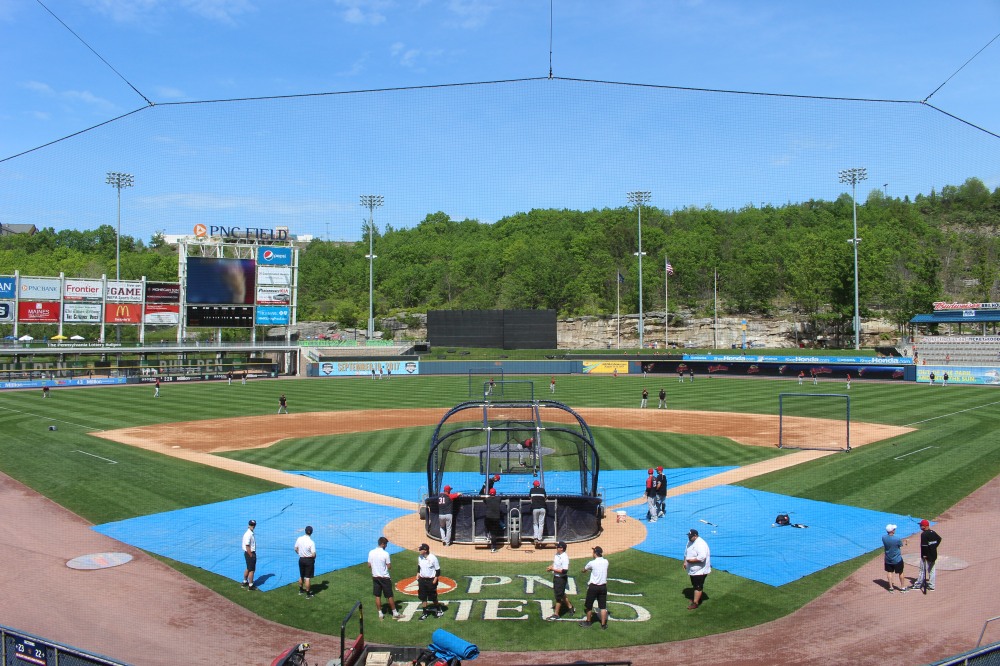 The RailRiders history dates back to 1919, and got their start as the Reading Coal Barons. They moved around quite a bit in the 20th century, moving to Albany, Jersey City, Ottawa, Columbia, and Charleston, just to name a few stops. They finally made their way to the Scranton-Wilkes Barre area in 1989, when they moved into the Lackawanna County Stadium. The franchise achieved great success along the way, including being the first team in 126 year history of the International League to win five consecutive division championships! In 2012, Lackawanna County Stadium underwent major renovations, and the team spent the entire season on the road, playing home games in Batavia, Syracuse, Buffalo, Allentown, and Pawtucket. When the stadium reopened in 2013, it was renamed PNC Field, and the upper deck was shaved off and replaced with sky boxes. They also changed their name from the Yankees to the RailRiders that season, although they maintained their affiliation with the Yankees.

Although the stadium itself is 28 years old, it seems brand new. Wide open concourses, comfortable seating, a wrap around path around around the outfield, and plenty of great food choices. There’s even outfield grass seating that provides a great chance for catching home run balls. 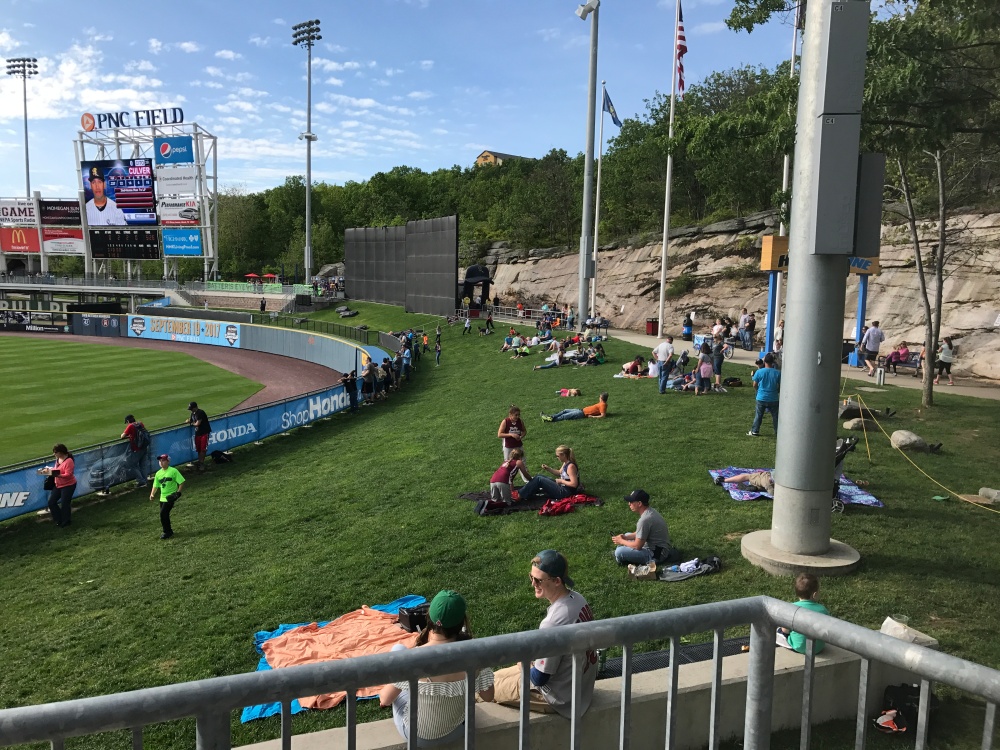 I really like it when parks have a seat reserved honoring our fallen heroes. PNC Field does the same with a very classy plaque.

As impressive as the stadium is, I have to say the fans are second to none. On this Saturday evening, there were plenty of families in attendance, and everyone I chatted with was very friendly. No booing of other players, no yelling at the other team. That’s what I like about attending minor league games. The atmosphere is very different from major league games!

Anyone who has read my blog posts before, you know my excuse for going to games is the food. It’s really a food blog wrapped around going to games. The RailRiders did not disappoint! From great burgers, to nacho bowls served in baseball helmets, and freshly made funnel cakes, it was a feast for the eyes! One of these days I am going to not eat for two days before going to a game so I can have more than just one thing!

For dinner, I settled in for an “incredi-burger.” Probably THE best burger I have ever had. It’s a cheeseburger, topped with BBQ, bacon (of course!), fried onions, and avocado! Believe me, it tasted as good as it looks!

I wish I had saved room for the nachos in a helmet! This is the Nacho Daddy! 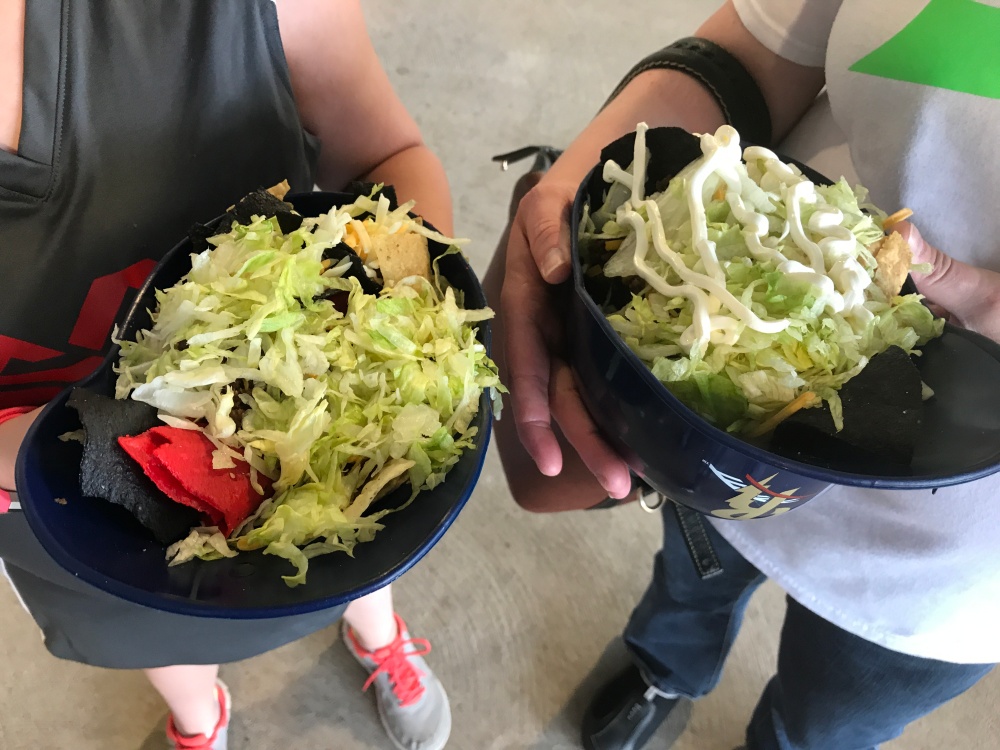 Here were a few other food options: 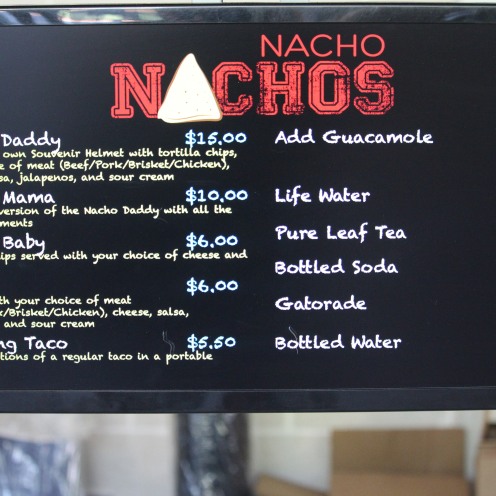 This might be a fun way to watch a game from the outfield!

The team store was one of the best I’ve seen, with a great mix of both RailRiders and Yankees gear. 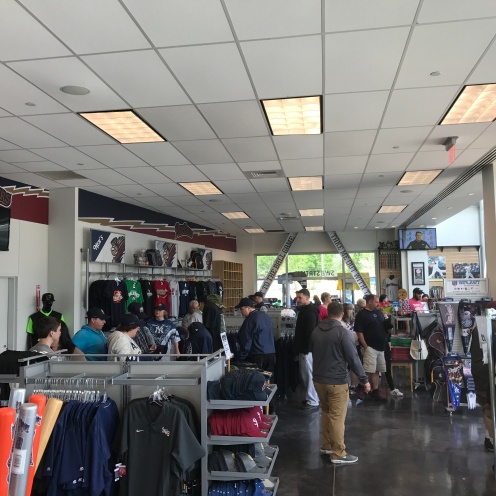 The national anthem was sung by the Dingman County (DE) Children’s Choir. They did a bang up job! 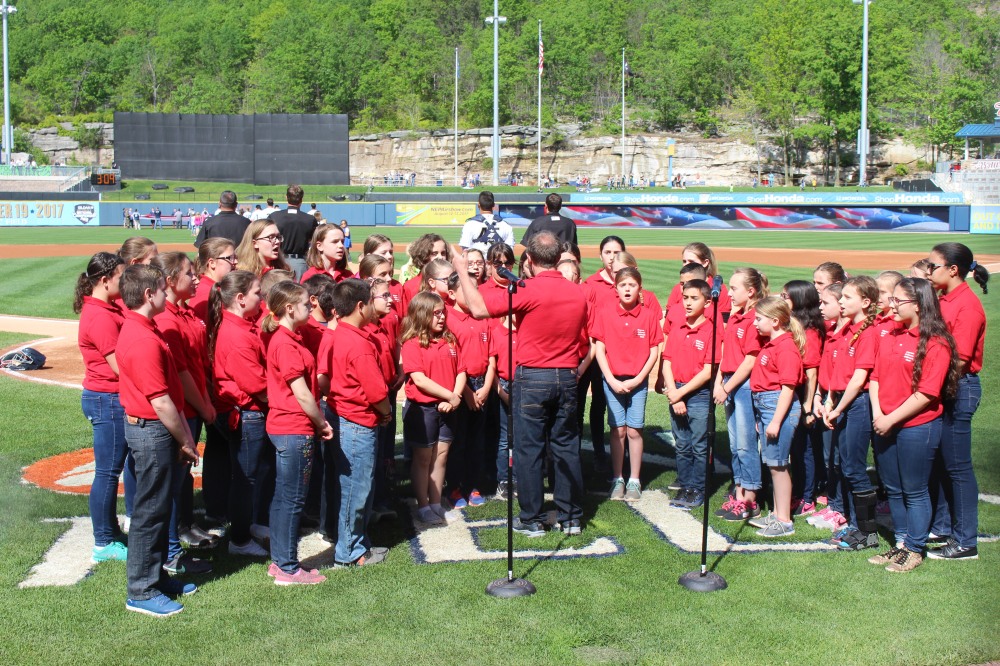 I couldn’t find a good link for them, but here’s a video of them appearing on a Red Cross fundraiser:

Leading the on field games and promotions was B-Jay, aka Barry Snyder. I had a quick chat with him before the game, really nice guy! I told him I was from Northern VA, and he has family here, so we hit it off pretty good. He was full of energy the entire game.

Here’s B-Jay with a pre-game video shoot, which included the Governor’s Cup that the RailRiders won in 2016. The 2017 Governor’s Cup game, the championship game between the two winners of the AAA leagues (International League and Pacific Coast League) will be played at PNC Field this year!

Like all minor league teams (and some major league teams), the RailRiders had their fair share of between inning games and promotions. But it didn’t seem over done or cheesy. I guess that’s the sign of a classy organization! They did have some cute games that I hadn’t seen before. Thankfully no dizzy bat races or sumo wrestling! Not that those aren’t funny…. the RailRiders were imaginitive in their games!

A race against the clock: The Planet Fitness hula hoop puzzle, trying to get hula hoops through the line of kids while holding hands: 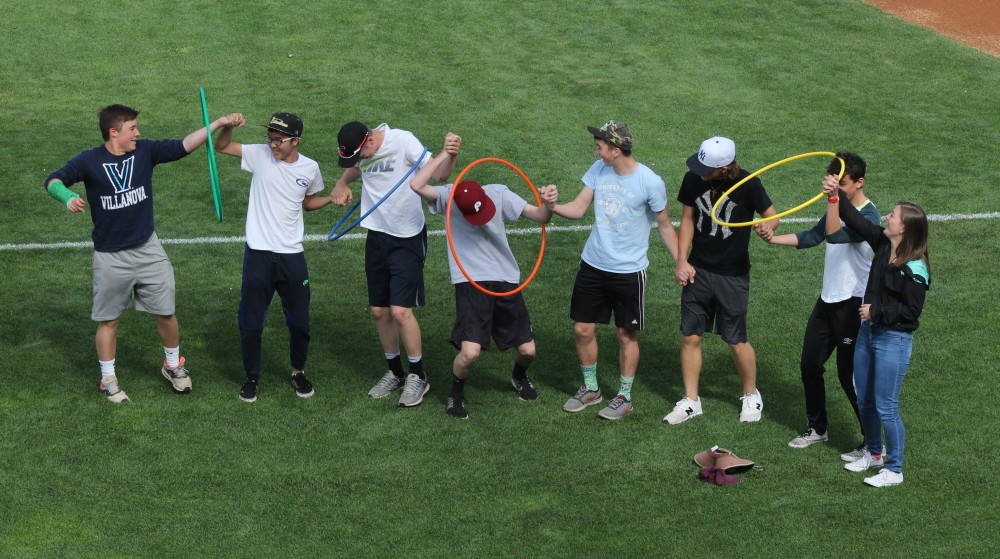 Kids comedy, won by Ethan on the left: 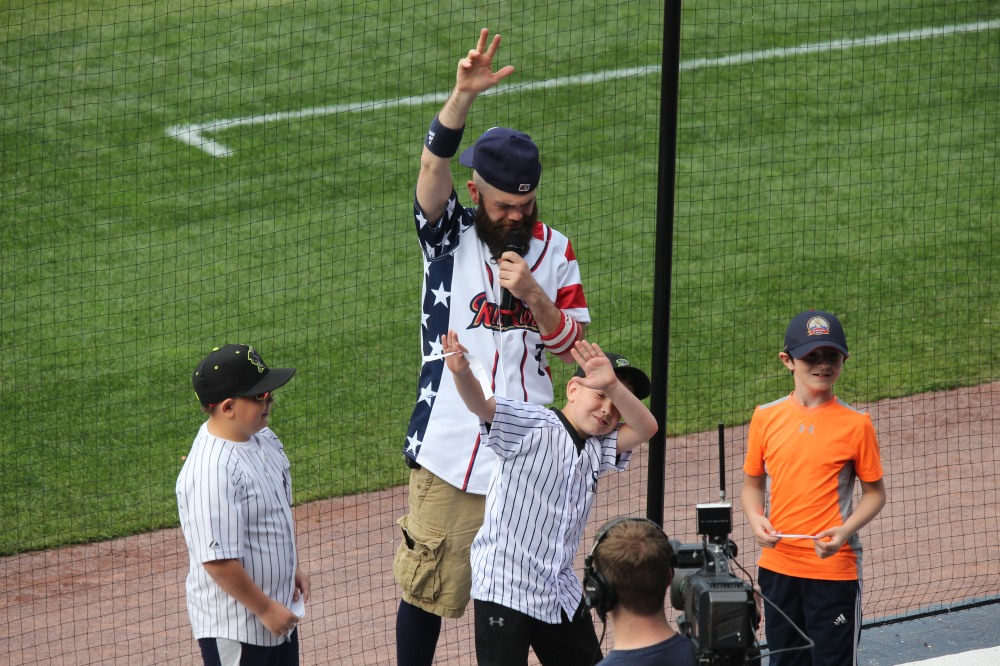 They had their own Legends Race, with Billy Martin, Thurmond Munson, Mickey Mantle, and Joe DiMaggio. Martin got out to an early lead, but pulled up lame in the last 25 yards with a PE hamstring, allowing Munson to capture the win! 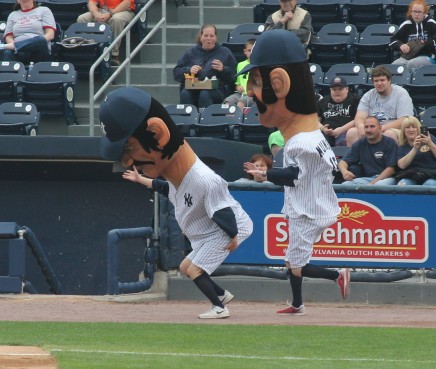 They also had base cleaning, and a group of kids doing their cow impressions in the Mooovelous Moo Off!

Unlike the last couple of seasons, I didn’t ask for a press pass to the game, but I wish I had. I got a sneak peek through the glass of the media area. Triple A games are pretty close to major league games in the operations area, and it would have been awesome to tour through the press box. Maybe next time!

The RailRiders jumped to an early lead in the first, with a two run homer by Dustin Fowler, followed with a solo shot by Mike Ford.

Cito Culver followed with a solo shot in the second and the RailRiders were up 4-1.

The Red Wings did rally with two in the sixth and one in the seventh, evening the score at 4-4. We headed to extra innings, and RailRiders fans had their rally caps going! 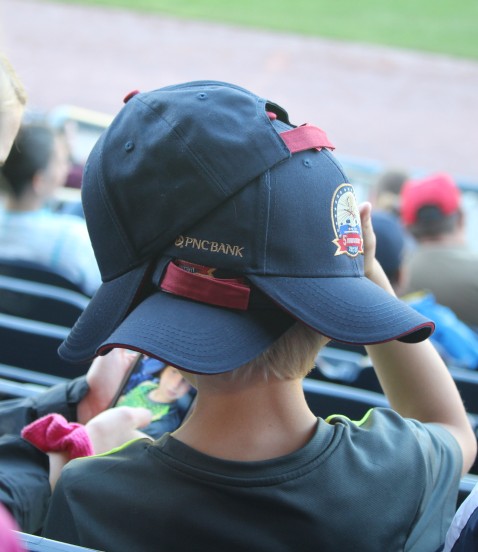 In the 11th with bases loaded and two outs, Mark Payton singled to right to drive home Rob Refsnyder to win it for the baby Yankees! 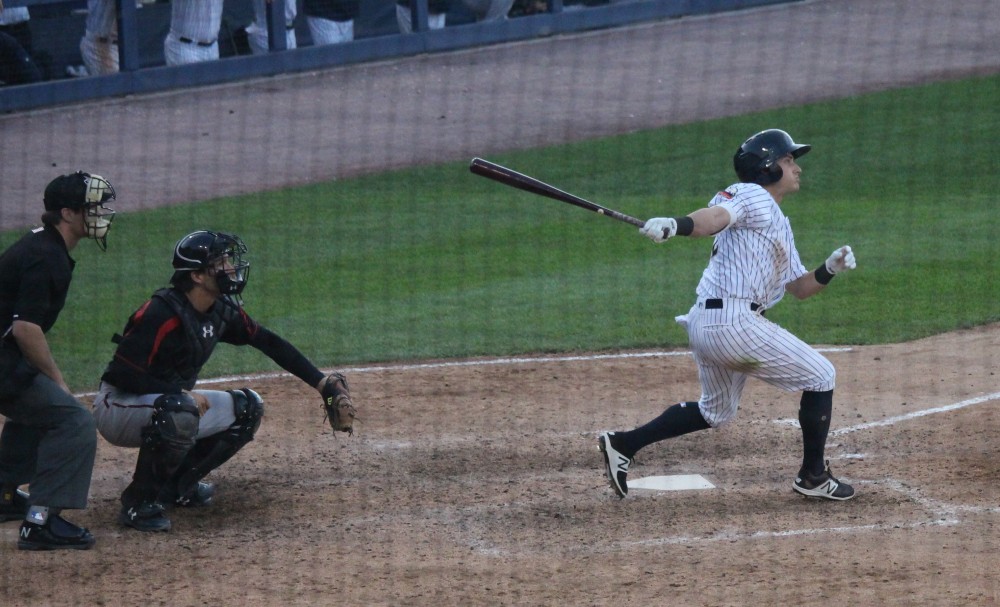 Here are a few other game photos: 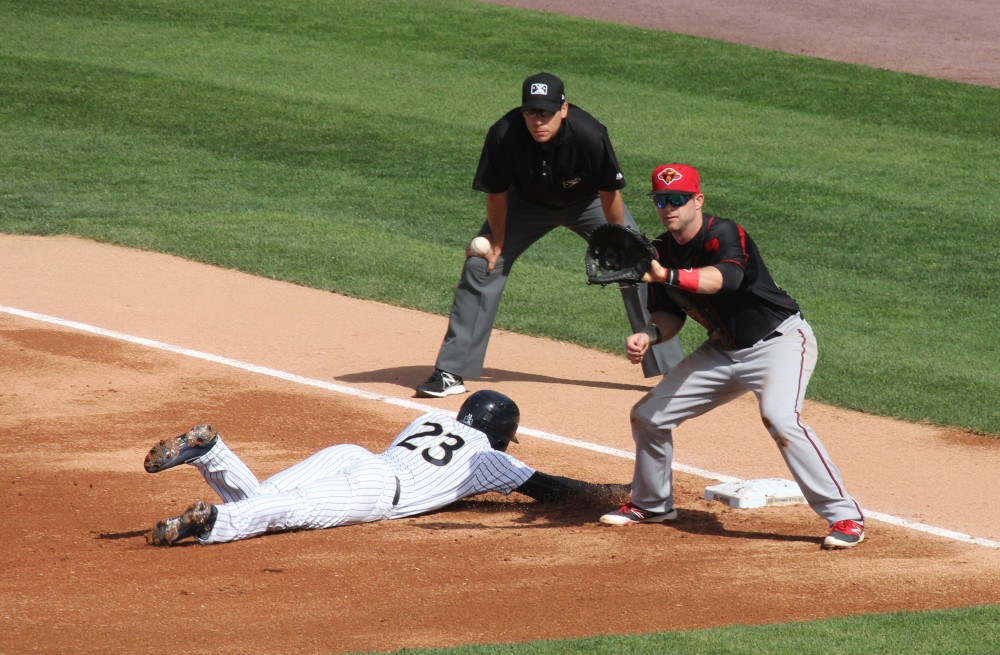 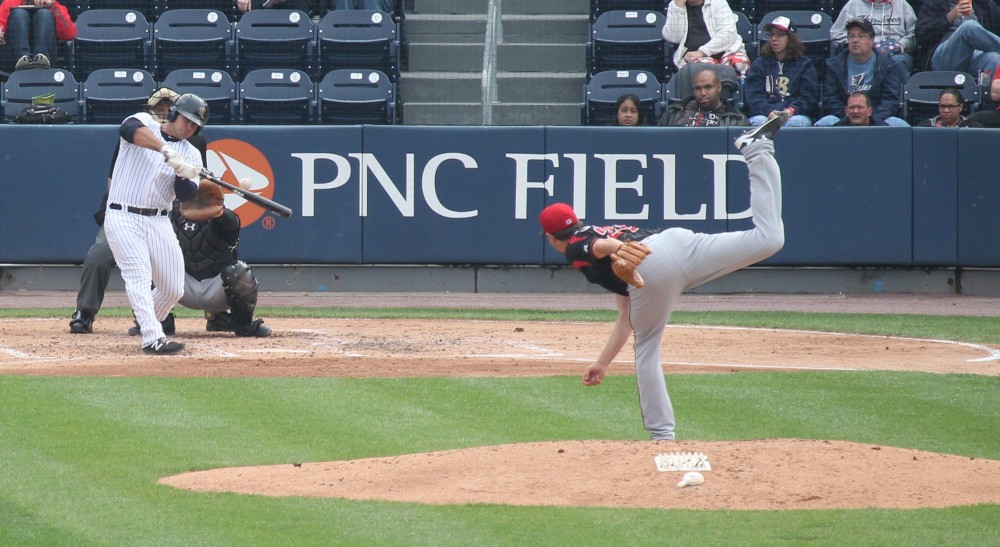 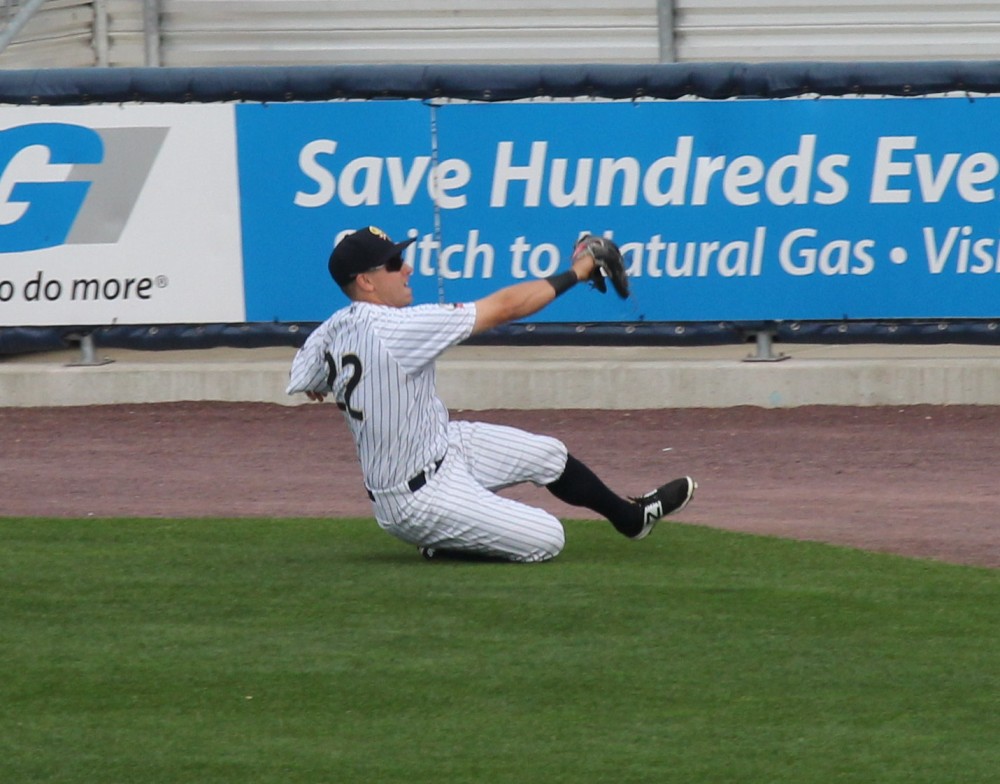 I will admit, I am not a Yankees fan. That said, this was a really fun trip! I’ve been to Trenton, Staten Island, and now Scranton Wilkes-Barre, all Yankee farm teams, and I have to say each is a class organization! Great atmosphere, fantastic fans, and an awesome place to watch a game!