Now that we have THAT out of the way….. I recently took a trip to Jacksonville to see the newly rebranded Jumbo Shrimp take on the Mississippi Braves in AA Southern League action. This is the third time this season I’ve been to a game where the team was recently “rebranded”, the first being the New Orleans Baby Cakes, and then the Binghamton Rumble Ponies. While I never visited the Jacksonville team when they were the Suns, I have to say they have done an excellent job in embracing the new name and spirit of the branding, and this would be a team that I would visit again just for fun! The staff were phenominally friendly, as were the fans, and the setting in the Baseball Grounds of Jacksonville is second to none.

Jacksonville has been home to minor league baseball for nearly every year since 1904. From 04-61, the city was home to the Jays, Tars, Braves, and even the Jacksonville Red

Caps of the Negro Leagues. The first edition of the Suns, starting in 1962, can trace their roots back to the Havana Sugar Canes, who played in the International League until 1959. After a brief stint in New Jersey, they came to Jacksonville and began play as the Suns. The first edition of the Suns relocated to Norfolk in 1969, but in 1970, the new Suns began play in the AA Southern League where they have been ever since. After the 2016 season, they rebranded as the Jumbo Shrimp. As their website states, ” As Florida’s largest city, yet in many ways a richly connected and close-knit community, Jacksonville is truly a Big Small Town. It has unique water geography as the River City on the First Coast. The Jacksonville Jumbo Shrimp represents those themes and expresses the affordable family fun of Minor League Baseball.”

The ballpark itself is beautiful, clean, and in a really interesting part of town. It’s part of the stadium complex, and sits between the Jacksonville Veterans Memorial Arena and EverBank Field, home of the Jaguars. Before entering the stadium, I noticed some really cool statues up on thirty foot high pedastals. I found out later they are known as the Talking Continents, which symbolize the 6 inhabited continents of the world. You can read more about them here. Little did I know that at night, they lit up.

The church in the photo above is the old St. Andrews Episcopal Church, built in 1881. It’s a gothic revival style church now owned by Jacksonville Historical Society. I thought the contrast between the steeple and the art work was fascinating!!

I love all the brick work on the outside of the stadium!

A couple of highlights: they have a well stocked bar in right field:

With berm seating they can actually hold about 11,000, making it one of the largest AA parks in minor league baseball! 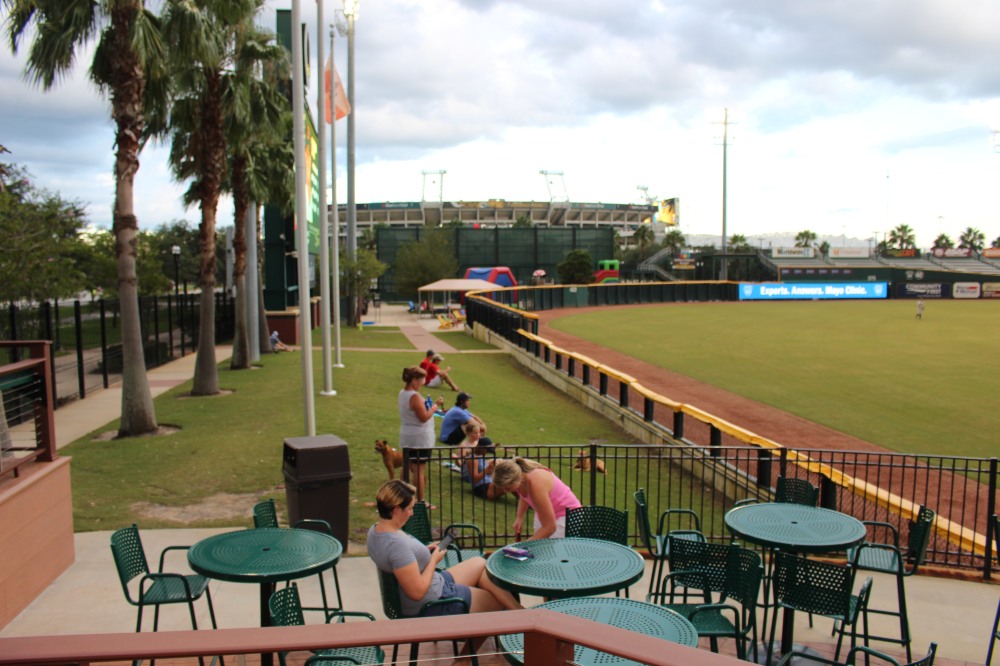 I almost hesitate separating friends and staff. Just because everyone we met that worked for the Jumbo Shrimp was so awesome they seemed liked friends!

I’d be remiss if I didn’t mention a couple of the staff. First and foremost was Patrick, our usher. I had seats right behind home plate, and Patrick was the first to greet me that evening. Patrick is a long time usher with the Shrimp, and even worked at the previous home of the Suns, Wolfson Park. He truly made the night! He was informative, gave me a scorecard, wiped out the seats between the rain the came in, and was a true gentleman and fan during the entire evening. Thanks Patrick!! 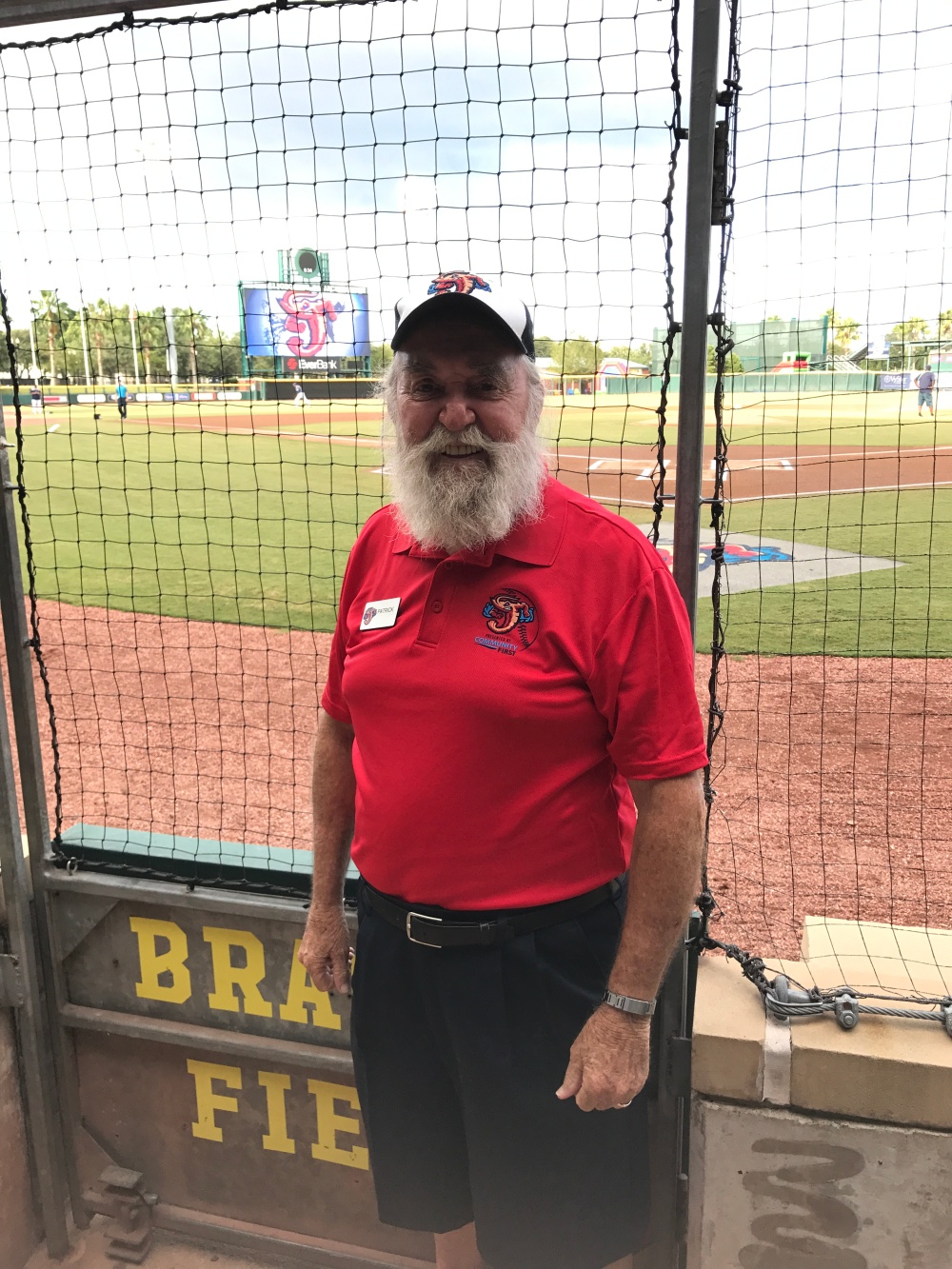 When we exchanged business cards, he gave me this classic!

A second shout out has to go to Roger Hoover and Marco LaNave. While I was planning to attend just as a fan, and purchased my seats just behind home plate, I reached out to Marco about obtaining my first 2017 press pass. Marco was very accomodating, and provided me with a press pass. It was a pleasure meeting both of them, and I really appreciated their hospitality!!

Roger and Marco in the press box: 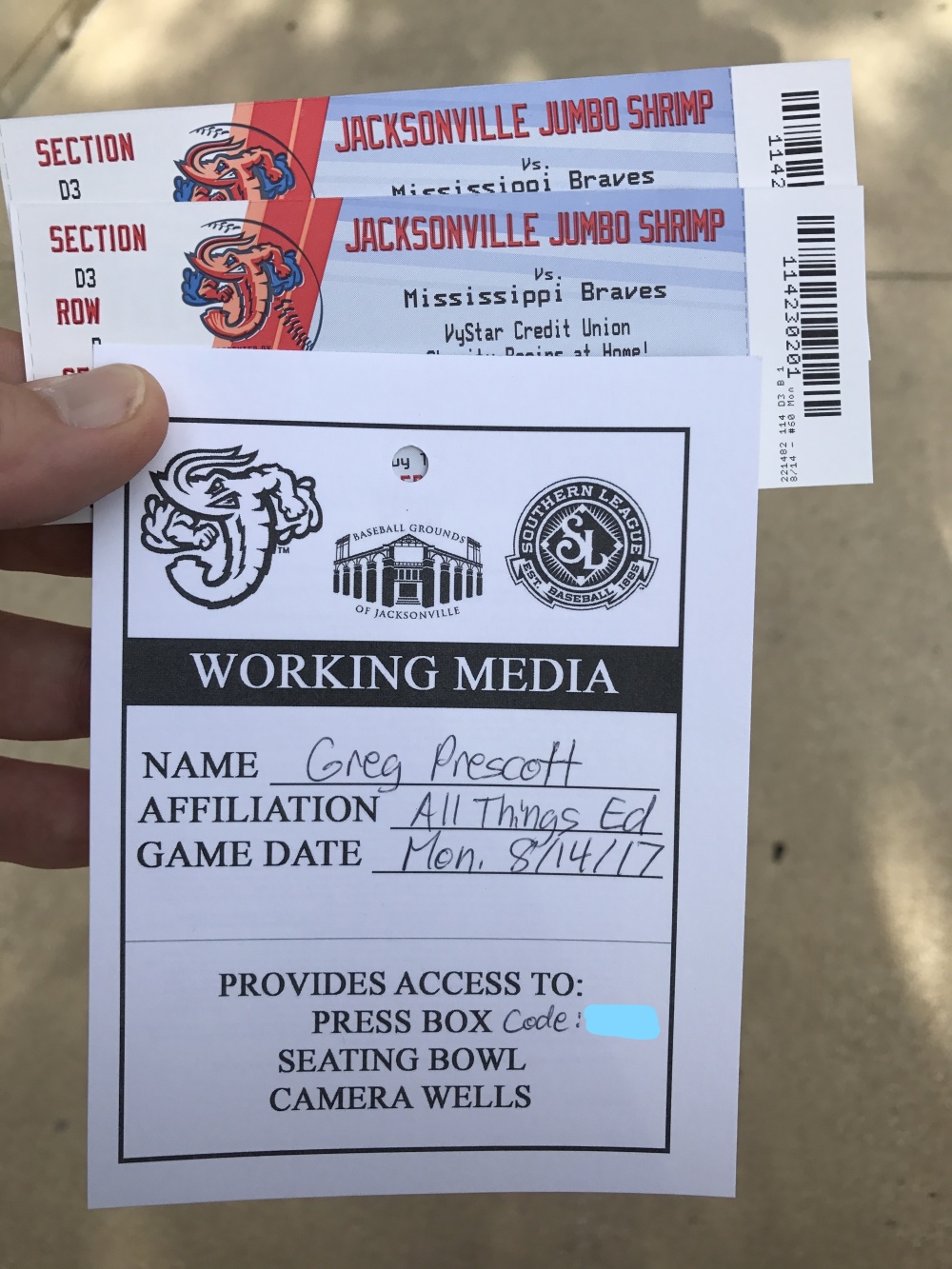 The fans were equallly as friendly, both the two legged and four legged varieties! This was their canines and crusteceans night, so I saw quite a few very cute dogs! 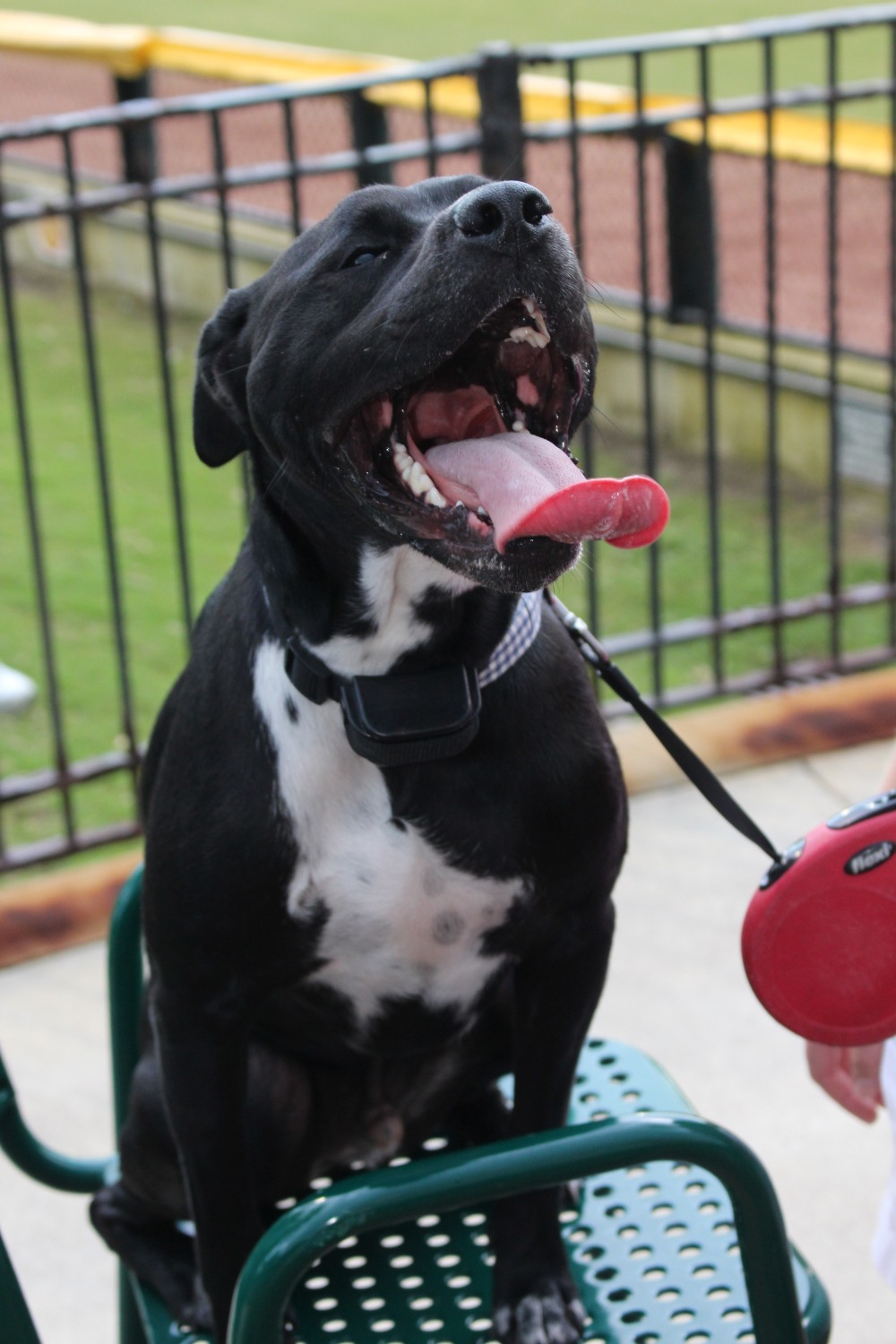 Also in attendance was Adriane, from Sandy Paws, a dog walking service:

And speaking of dogs, I ran into Southpaw!

Did someone say shrimp??

Just like Bubba, I love shrimp!! I was very excited when I read about the menu online. I figured I had just died and gone to shrimp heaven. And I wasn’t disappointed! To save some typing, this is from their press release on all the new items on the menu:

Before going into what I did order, I will tell you some of the items were not available because it was nearing the end of the season, and it was a mid week game. Also, one minor complaint, the menu for the dugout seats didn’t have everything that was actually on the menu. They might want to fix that. That said, I did not go away hungry!! First up for the game, I ordered the torpedo shrimp and the boom boom shrimp. To sum it up in one word: WOW!!!!!! 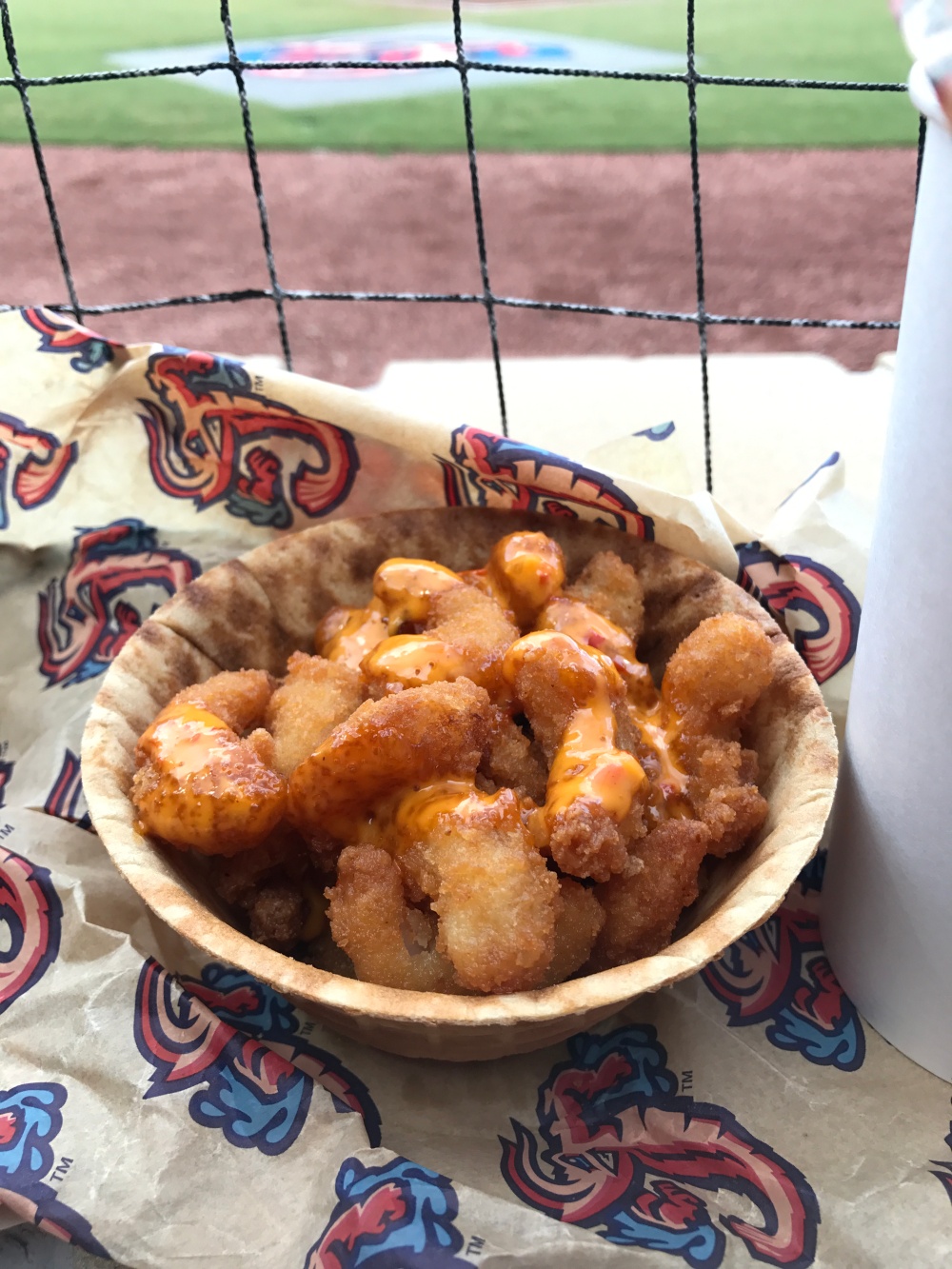 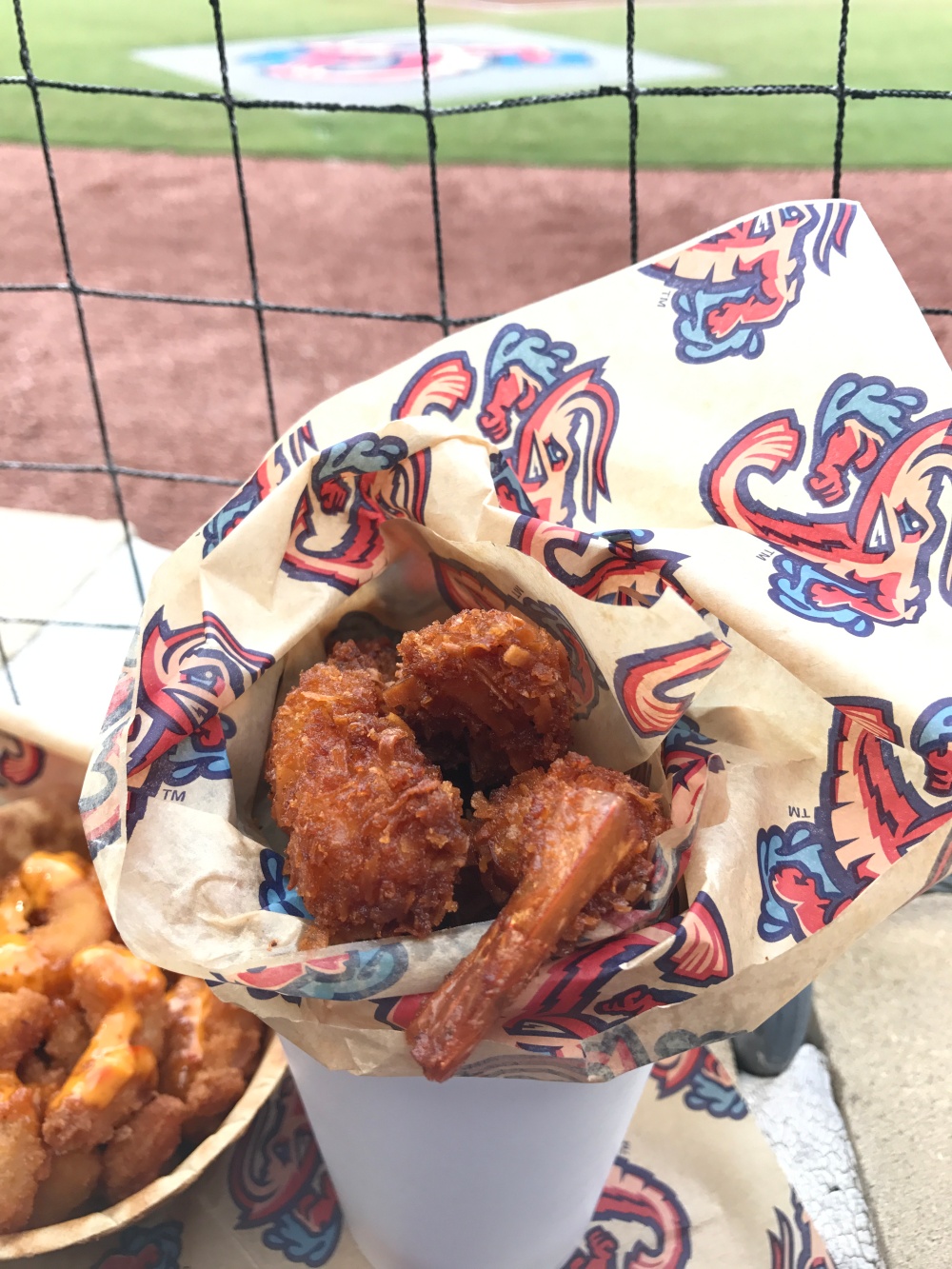 Later on, I did top it off with a sausage, and the beer selection was amazing! 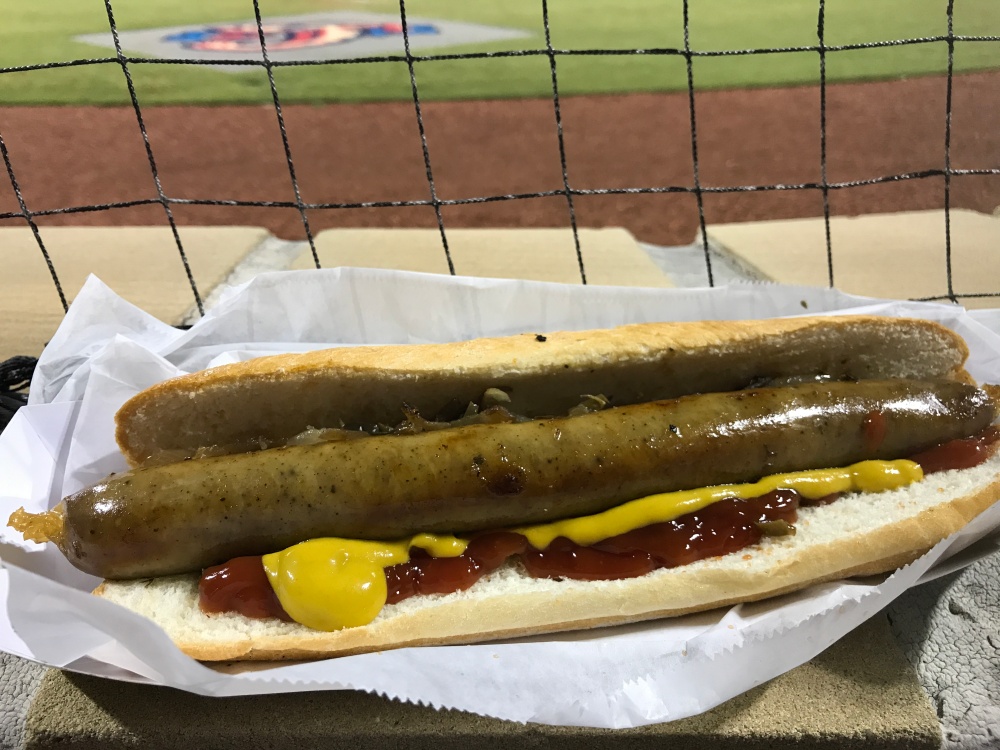 Props to the Jumbo Shrimp for not going totally commercial. Not sure if they even entertained this idea, but I was very glad to see they didn’t connect with Bubba Gump Shrimp to open a stand or restaurant in the stadium. They kept it local and fresh!

Pregame and in game entertainment

Singing the National Anthem was Jasmyn from Menendez High School. She knocked it out of the park!

Cleaning home plate before the game:

The Shrimp did a great job of balancing the between inning games entertainment. I was able to get the list of what they planned when I visited the pressbox. They struck a great balance between live events and on screen promotions. Very professional! 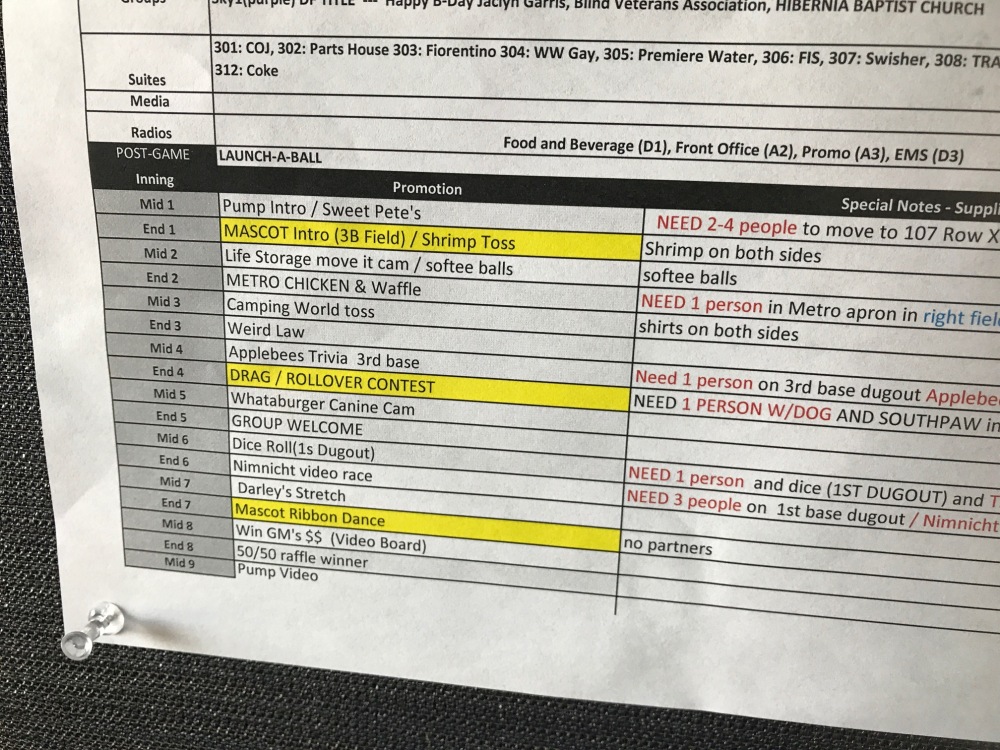 Here, they needed to toss the pizzas into a fryer:

They also had a dance off between Southpaw and Scampi: 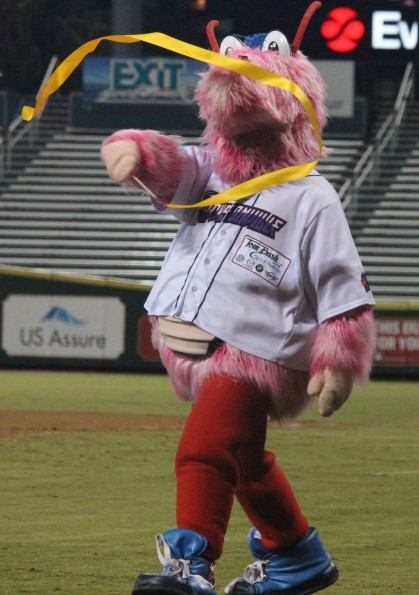 I caught up with Scampi later, he didn’t seem too disappointed in his loss in the dance off:

Here are a few game photos.

Gotta go with your lucky pants! 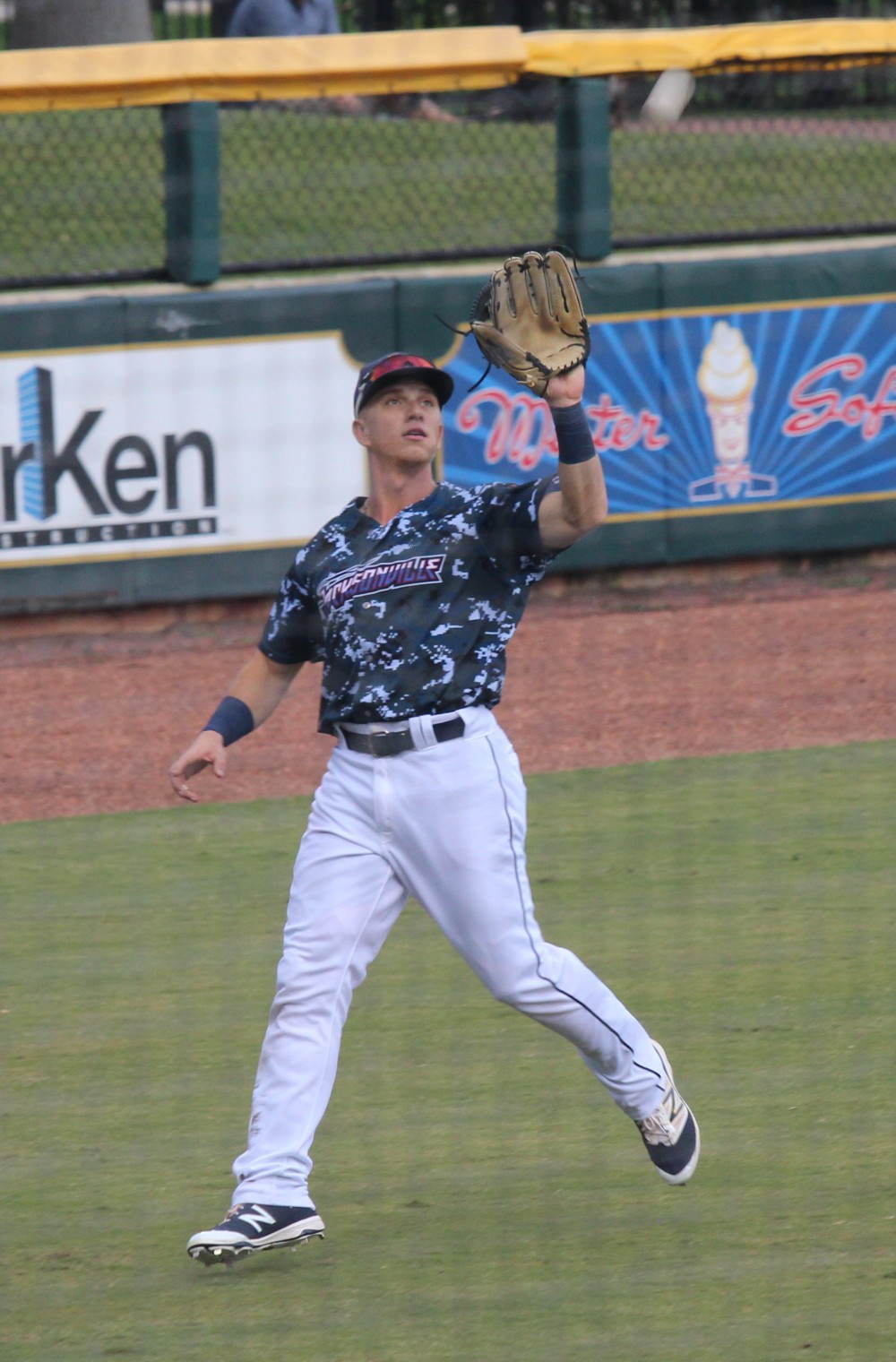 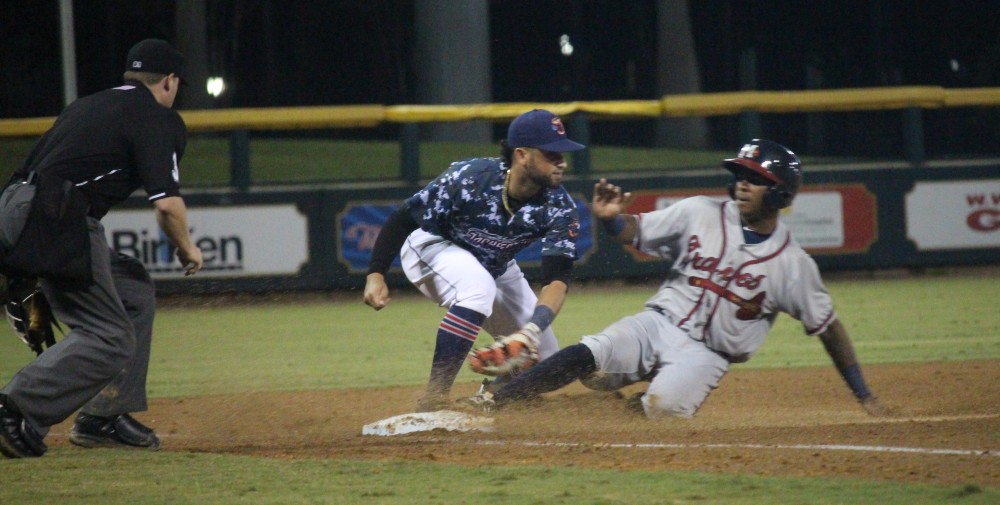 Not happy with the call:

And it wouldn’t be Florida without rain!

Lastly, you would think sitting behind the screen would give you a sense of security. However, during the game, a foul ball came straight back and actually went through the netting!!! It landed in a fan’s lap, and then repairs were made to the netting. Just a reminder, always pay attention to the game!!

The Jumbo Shrimp changed their brand because Jacksonville is a big small town. And everything I saw incorporated those values. If you find yourself on the east coast of Florida, visiting St. Augustine as we were, be sure to take a short drive up to Jacksonville to see the Jumbo Shrimp. Well worth the drive!! 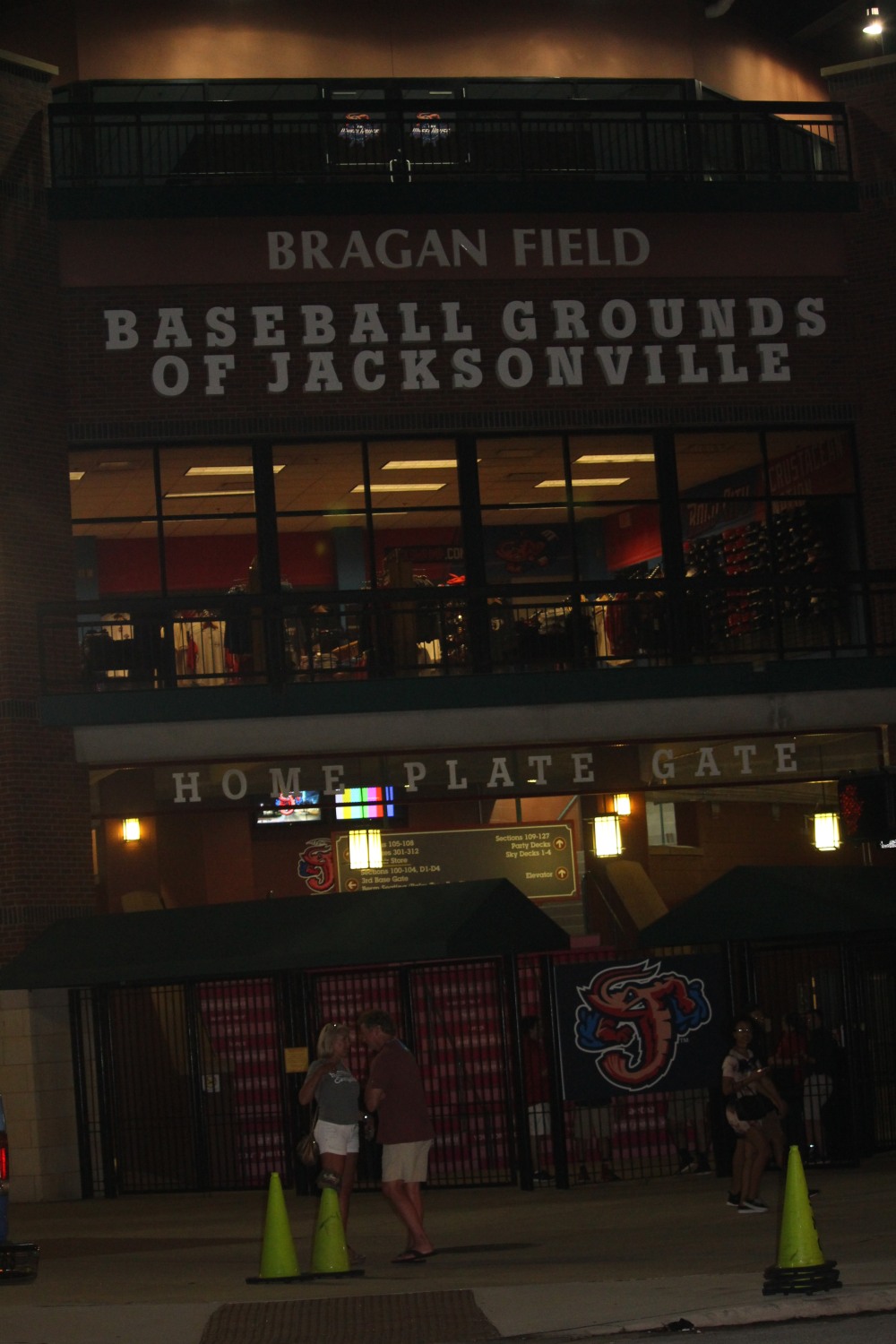