Last month I had a chance to experience “Tebow Mania” first hand. I had heard the stories, read the articles. But really, could ONE guy, who ended the season hitting a combined .226/.309/.347 really have the effect that everyone said he had? I have to say, emphatically, yes!

I decided last minute to see Tim Tebow and the St. Lucie Mets in action in Clearwater against the Threshers. I was there for no other reason than to see the Mania first hand. I have been to other Threshers’ games, so I had no reason to go for my blog. Except now I am blogging about it. So, in a sense, I was part of Tebow Mania! 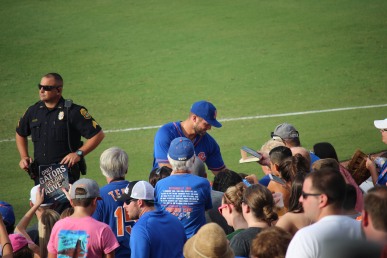 I’ll get to some empirical evidence in a moment on his effect on attendance in both the Southern Atlantic League (SAL) and the Florida State League (FSL). What I saw beyond the stats, though, was a player for the opposing team sign more autographs than anyone on the home team, someone who’s every move was cheered, and received standing ovations when he came to bat. I saw more Tebow jerseys, mostly from his football playing days at the University of Florida, than any other jersey in the stands. And a hundred or more fans standing in line in the dark after the game outside the stadium waiting for one last chance to see Tebow, hopefully securing one final autograph. Or maybe just to see The Man one last time. Outside of Cal Ripken’s farewell tour, I haven’t seen a home team embrace a player from the visiting team like I saw with Tim Tebow.

For an FSL game in mid August, the crowd was exceptionally large. The Mets were in town for a four game series, and the average attendance for this mid-week series was 5,375. To put it into perspective, the average attendance at the last Threshers homestand was 2,467, and for the year, their average attendance was 2,988. I’ll go into the stats a bit more, but I would say that is a pretty significant statistical anomaly!

Subjectively, I could tell many were either first time baseball fans, or casual fans at best. The family sitting directly behind me was there only to see Tebow. I overheard them say after his first at bat, “We can only stick around til he comes up again.” I could tell other fans weren’t used to “fan etiquette” that old timers like me were used to. Most long term fans know to wait until either between innings, or at least make a fast effort between batters, to walk up and down the aisle to/from their seats. Call me a curmudgeon, but I did lose a few good photos of other batters because of this. But I was overall impressed with the politeness of these rookie fans. It does beg a larger question though, which I’ll get into later, which is was this “Tebow experiment” good for baseball, and the larger question of how we can get these casual fans to keep coming back to games. 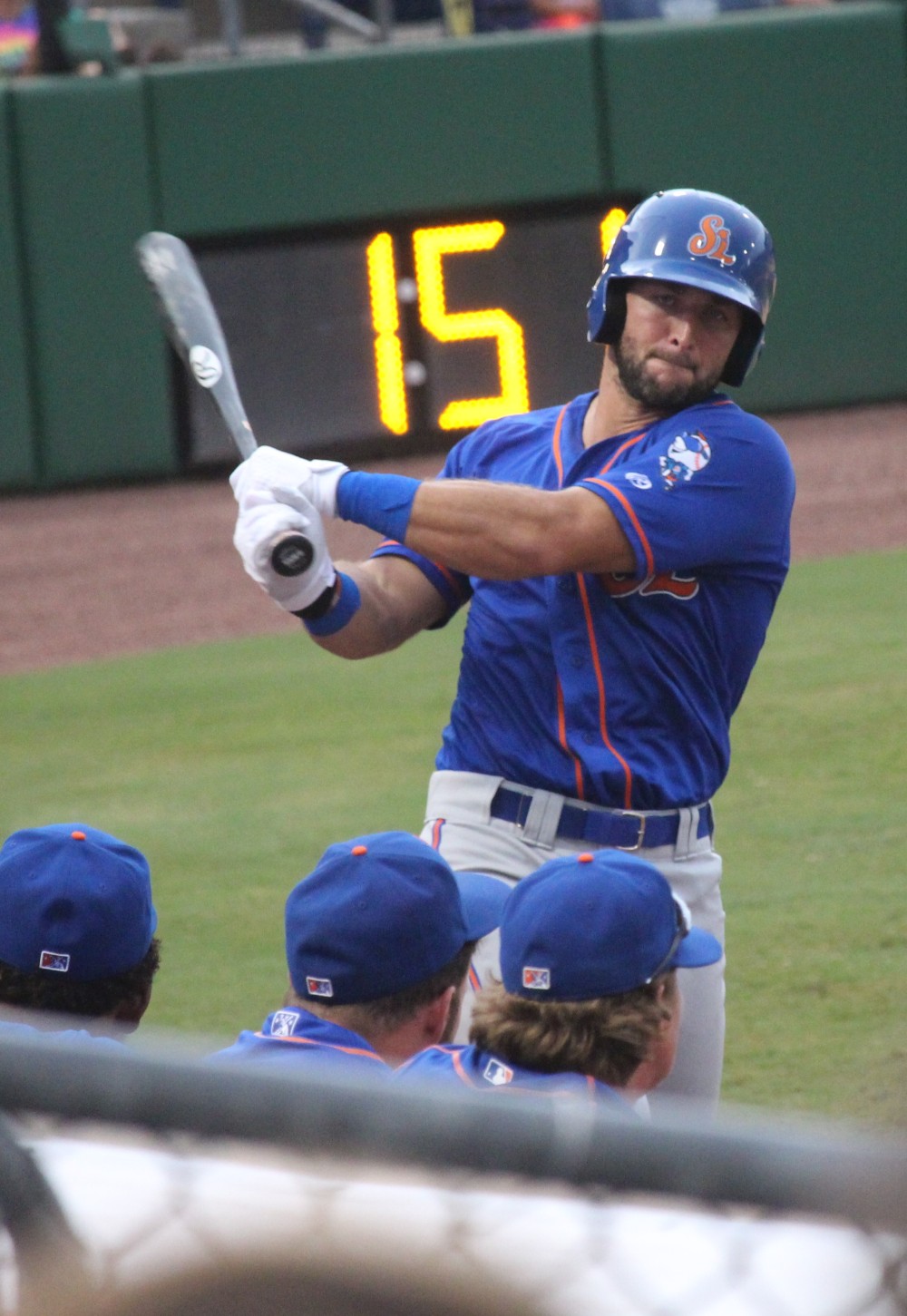 I had the chance to speak with St. Lucie General Manager Traer Van Allen. He definitely recognized the effect on attendance, and looked at it as a way to show off their product. “We have a chance to expose our product to a wide range of fans. There’s so much more than just sitting watching 9 innings of baseball. Entertainment, hospitality area, special promotions. We didn’t necessarily change the way we did our thing, but to show off what coming to First Data Field was all about.”

Van Allen went on to say that the Tim Tebow you see in the news is the real Tim Tebow. “There’s a definite buzz about him for sure. Everything about him is positive. His work ethic, the way he conducts himself, that’s the role model you’d want to put out in front of other players. What he portrays is the real deal.” In addition to the added fans, the extra media attention and the scouts coming out to see the games certainly benefited the younger players, getting them to be in the spotlight even more as well. 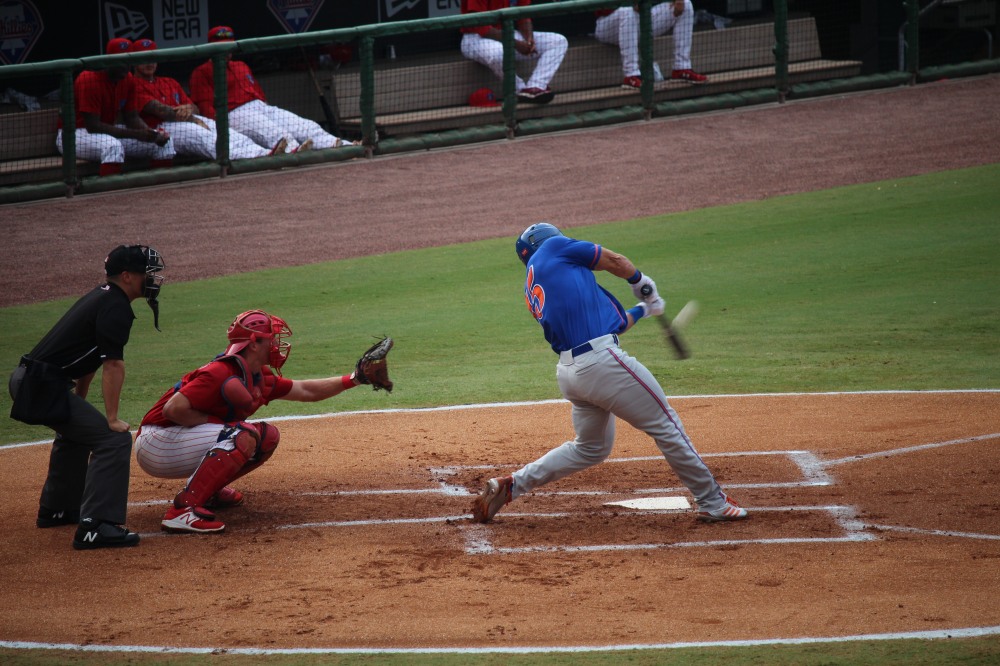 Tebow by the numbers

No, not those numbers. I’ve already given his slash line. What effect did he have on attendance?

If you look at the same period last year vs. this year, the difference is even more dramatic. The Fireflies averaged 3,832 per home game compared to 5,308 this year. That’s an increase of 38.5%! Game by game, here’s how it looks: 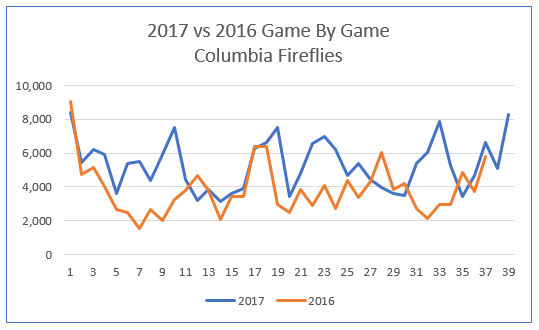 Note the Fireflies had two additional home games in 2017 compared to 2016.

Here’s a better way to look at the difference.  This shows the cumulative home attendance for the Fireflies in 2017 with Tebow vs. 2016 without Tebow: 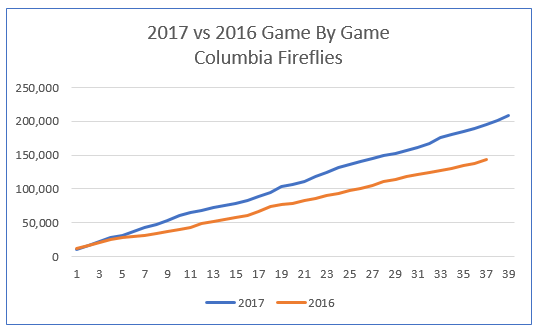 Below is a summary of the data:

Because of the seasonality of attendance figures, let’s focus first on SPLY for St. Lucie. Comparing games between June 28 and the end of the year, here’s the game by game trend:

Again, another way of looking at the data, the cumulative home attendance for the Mets with Tebow in 2017 vs 2016 without Tebow:

Note there were eight more games in the same period in 2016.

The averages to SPLY, and before Tebow arrived, are even more dramatic:

To say he influenced away game attendance would be an understatement! It’s no wonder that overall FSL attendance for 2017 was up 9% compared to 2016.

I would venture to say that nearly all the St. Lucie Mets increase in attendance was due to Tim Tebow – 35,803. At an average of $21 spent per fan per game, that’s an additional $752k in revenue just for St. Lucie.

Fans after the game hoping for one more glance or chance for an autograph. 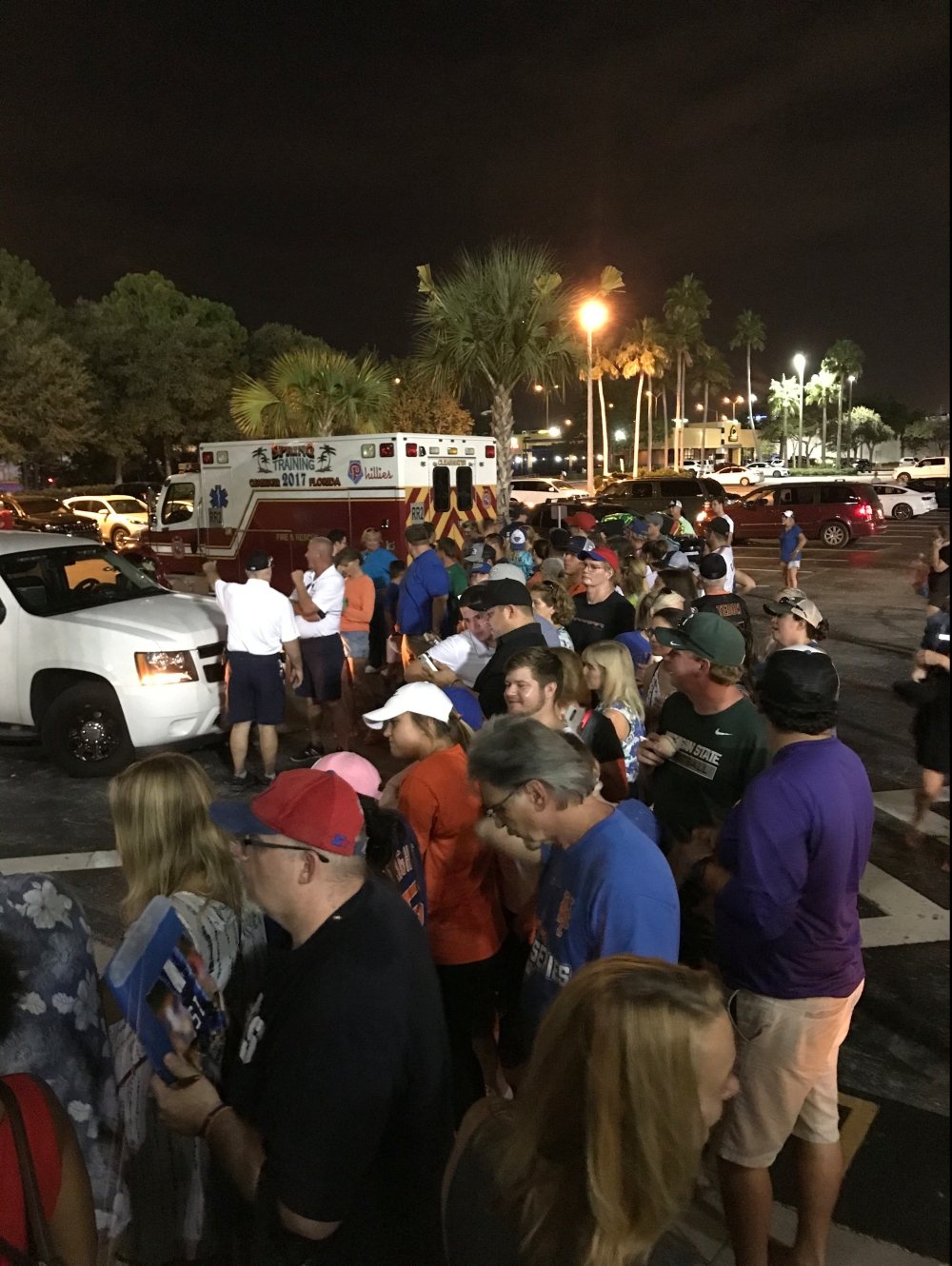 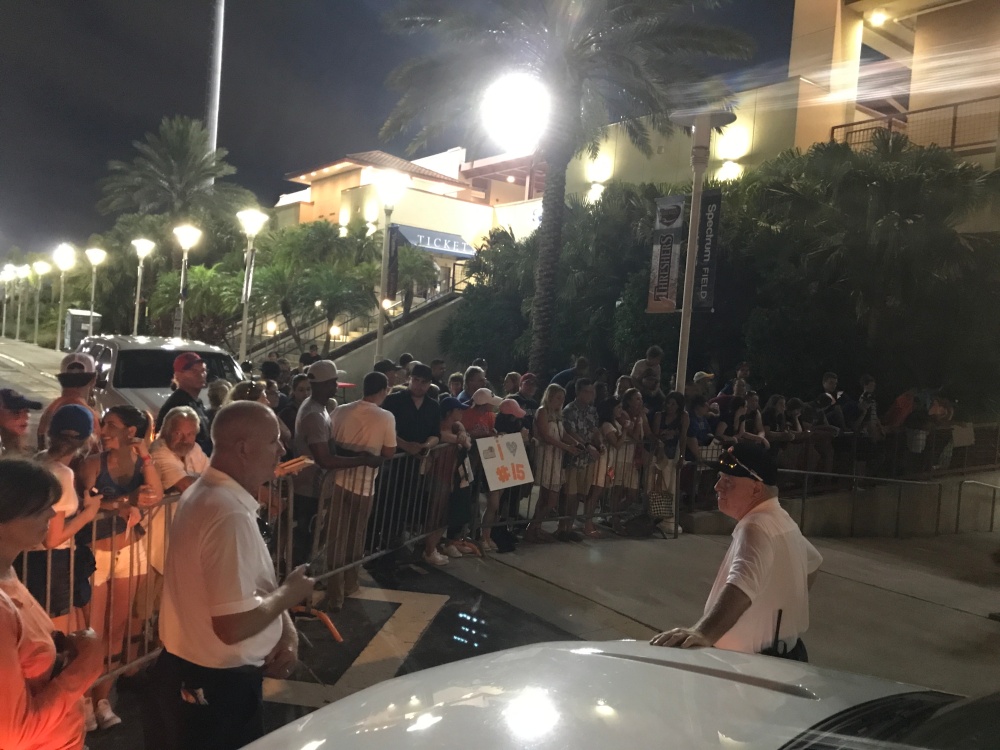 The short term effect that Tim Tebow had on 2017 attendance was amazing. He said he is committed to playing in 2018, so hopefully those trends will continue. But long-term, what can be done to sustain attendance and keep these new found fans coming out night after night? Minor League Baseball has a quality family product. MILB reports that a family of four can attend a game for about $65. Not bad for three hours of entertainment! They run quality promotions, and keep fans entertained during the game. As Van Allen stated earlier, it’s about entertainment, hospitality, and special promotions! We, the fans of Minor League Baseball, and the staffs just need to keep getting the word out!

Departing from my normal blog, I’m not going too much into the game experience. I have already blogged from Clearwater. I will say it was an exciting game, going 10 innings with St. Lucie getting the win! Yes, it was hot. And humid! But the food, as usual, was fantastic: 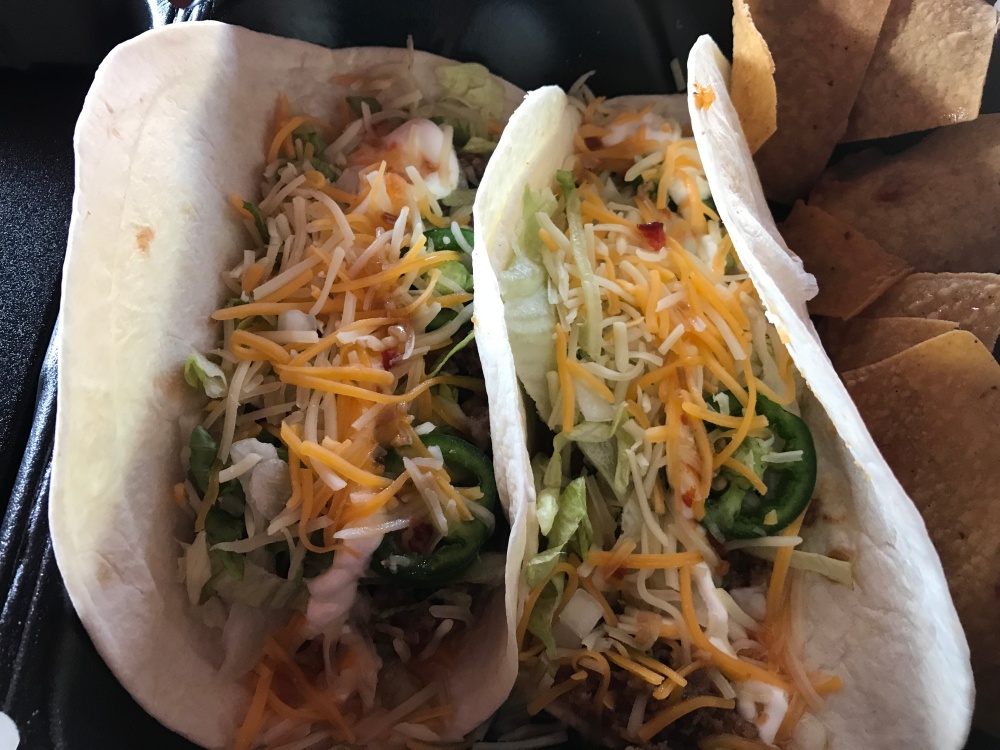 The action on the field was great!

And I do love Clearwater sunsets!

Analyst’s disclosure: while I am an FSU Seminole, my daughter also owns a Tebow jersey with a National Championship patch from the Gators 2007 season.