Believe it or not, this blog is not my first attempt at being published. To this day, I have always had two true sporting loves: baseball, and track & field. My love for baseball is well documented with this blog. My love for track and field, while it has ebbed and flowed over the years, is just as strong. I started my track and running “career” back in middle school, and continued through high school. While not nearly the fastest member of the team, I was always good enough to land a spot somewhere on the 4×440 team, or could be thrown into just about any event in a dual meet just to pick up a point or two. In one meet in my senior year, against a very small school, my coach even had me “ride the pole” to clear the opening height in the pole vault (the opening height was ridiculously low) and even did the 120 yard hurdles to pick up another point. I continued running after high school, competed in an intramural meet at FSU, ran a few marathons and half marathons, and even drove from Asheville,NC to Knoxville, TN while on vacation after my senior year in high school just to see the opening day of the USA Track & Field Championships! One constant in my love for track from the late 70s through the 90s was the magazine Track & Field News (T&FN)- the Bible of the Sport since 1948!

Here’s a photo from the 1982 National Championships that I took of Carl Lewis in the 100m prelims:

I picked up my first copy in my track coach’s office my freshman year, and was hooked. The only place to find it on the rack was at the Athletic Attic in Tyrone Square Mall in St. Petersburg. I always found a way to get my mom to drive me over once a month to pick up a copy. Later on, I took out a subscription, and at one point, I had probably 10 years of back issues sitting in a closet. On my runs, I would envision myself “racing” against the greats of the day: Alberto Salazar, Craig Virgin, Sydney Maree, and others.

When I was in grad school at George Mason University in Fairfax, VA, I would jog on their indoor track after work before going to class. There I saw one of GMU’s pole vaulters working out. His name was Istvan Bagyula.

Bagyula was recruited by then coach John Cook, who was building a great track program with many “import” athletes. As I circled the track many nights, I’d see him working on his craft. I researched him a bit, found out he was a silver medalist at the 1991 World Championships! And here he was, practicing while I was plodding around the track!! I went back to all my editions of T&FN, and discovered that they had never done an article on him! My creative juices kicked in, and I contacted T&FN to see if they would be interested in getting an interview. I mailed a note to T&FN, and much to my surprise, they thought it was a great idea! (Note: remember this was 1992, before the net, so communication was done via mail and fax!). Here’s the response I received from Jon Hendershott, Associate Editor: 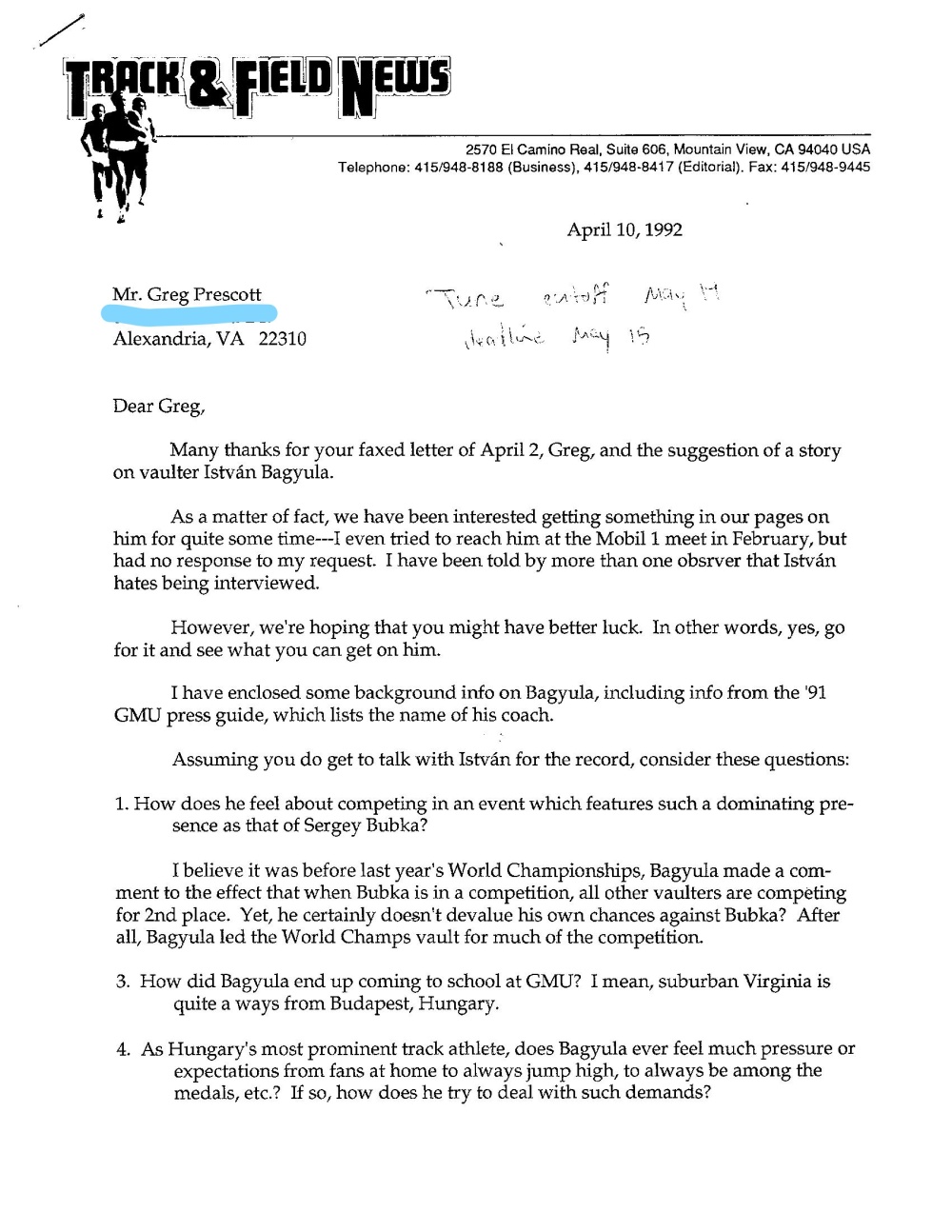 I was giddy with excitement! Other than random letters to the editor, I had never been published! Jon was great, he included all kinds of background material in his package, and so one night, I approached Bagyula and told him I was an MBA grad student and would like to do an interview with him for T&FN. To my surprise, especially since Jon had said they had pretty much gotten the cold shoulder from him, he agreed. We set up a time to meet, and he was awesome! I had my notes and questions ready, and I secured a micro tape recorder to make sure I didn’t miss anything. We chatted for a while in the stands, and he gave me plenty of his time. Just a down to earth kind of guy.

It’s funny how hero worship works with famous athletes. I recently befriended a famous athlete from my past on Twitter, a former professional wrestler, who I loved watching growing up: Gerald Brisco, who wrestled professionally in the Florida and Mid Atlantic territories in the 70s and 80s, and later was famous in the WWF (now WWE). Gerald is a WWE Hall of Famer, as well as being a member of the Chickasaw Nation Hall of Fame with his late brother, Jack. I “met” Gerald on Twitter, first following him, then exchanging a few messages with him directly. It’s amazing how open and just regular guys these folks are once you reach out to them. I had the pleasure of sharing breakfast with Gerald, and his son Joe, last weekend in the aftermath of Hurricane Irma. That conversation alone is fodder for another blog post! The gist is, our “heroes” most of the time just turn out to be great guys and someone you’d love to share a cup of coffee with!

Gerald Brisco and me:

I wrote up my article, and sent it off to Hendershott. Here was my chance: to be a published writer! Even though I was (am) a finance geek, I couldn’t wait to be published in my favorite magazine!! Then the bad news came. They couldn’t publish my article. Hendershott let me down easy, saying it was a matter of space. I was devastated. I held out hope, as his fax said, that it would be published later, but alas, it never was. I think I knew the real reason. When you are writing for the “Bible of the Sport” it had better be good! Re-reading it after all these years, it was more like a piece for US Weekly than the Bible!!

But here’s the kicker. Now I have a blog! I can publish anything I want! I don’t hold any ill will against T&FN. I continued to read them for many years after that, and still follow them on Twitter and Facebook. They have been doing their thing for almost 70 years! But now I have my own voice, my own pulpit. It’s now pretty easy to self publish! So, 25 years later, here’s my, um, masterpiece that was never published. And if you make it to the end, I’ll provide a post script!

At age 7, Istvan Bagyula was already an experienced polevaulter with a PR of 1.90 meters. “It seemed like a very interesting thing to do to for a 7 year old kid.” He had no idea that 16 years later he would be jumping in the US at George Mason University, have 5 NCAA titles, (3 indoors,2 outdoors) to his credit, own the collegiate record with a PR of 19-5, with a World Junior Record thrown in along the way, and to top it off, a silver medal at the Tokyo edition of the World Championships.

Istvan came to the US to be reunited with his coach of 8 years, Engre Gagyi. Gagyi left Hungary when Istvan was 15, and Istvan remained in contact with Gagyi, and upon finishing secondary school, they sought out a club or university to continue his training. Mason coach John Cook offered Istvan a scholarship, and Gagyi a coaching position, and over the last 4 years, that investment has paid high dividents for all parties involved.

Although last summer was a busy one for Istvan, and quite different from most of his fellow economics majors at GMU, he did get to go home over the summer. Istvan will be back at George Mason in the fall to finish his degree, but he has no plans on staying in the States. While he enjoys living here on on temporary basis, his family and home are in Hungary. “If I stayed here permanently, it would be bad. I’m going to have a degree in economics when I am finished. I really don’t know what to do with it, ” he laughed. Istvan is sure of one thing: he has no desire to to be a coach. “I’m 100% sure I don’t want to coach. I don’t have the paitence for it.”

At this point, Istvan has no other outside interests when he’s not in schoo or vautlting. When asked what he does to relax, to take his mind off of schoo and vaulting, Istvan replied, “I really don’t want to take my mind off vaulting right now. I never really did wan to to do that.” He does confide, however, that when he does go home, h want’s to get a motorbike. He had a motorbike once before, which he is reminded of everday by a small scar still visible on his chin.

Istvan’s 1992 campaign has been slowed by a nagging back injury that flared up prior to winning his fifth NCAA title. He has competed sparingly this season, with one of those meets resulting in a 19-1/4 effort, good enough for a second place in the European Indoor Championship. But he has not competed since the NCAA meet in Indianapolis. “My first competition would have been the IC4As anyway. During that two and a half months we would have trained very hard. But I haven’t been doing anything since the NCAAs basically. I wish I could do run throughs, but I can’t even run. As soon as I lift my knees a little bit more intensely, (the pain) kicks in.”

But Istvan is still dreaming of hardware in Barcelona, and maybe of the big prize. “Well, you can dream, but if you just dream, it’s not going to get you anywhere. Now, if you wan to be reasonable, you just go for second place if (Sergey) Bubka is there. you can dream, but what’s the point?”

But whether it’s the Olympics or a collegiate dual meet, Istvan is the consumate competitor. “It counts whether it’s a college meet or a high level meet, but those are not the only things that can motivate a pole vaulter. If the circumstances are good, which is the case most of the time here in the US, it can motivate you. Such as a nice tailwind, nice weather; that can be a motivator too because you know the circumstances are right for a good jump or doing close to your PR.” For Istvan, there’s always something to jump for. Including a medal in Barcelona!

The upside is after my breakfast with Gerald Brisco, I might be following GMU wrestling. George Mason Univsity recently hired coach Frank Beasley from North Carolina State University as their new head coach. Mr. Brisco encouraged me to follow NCAA wrestling, and since GMU is a mere 4 miles from my home, maybe I will have a new love and blog post material during the baseball off season!