The basic concept is pretty easy to grasp: two athletes, using their arms and legs, try to take each other down to the mat, and get a pin. Seems easy enough. But…

What if there’s no pin?
What’s this “ride time” all about?
Wait, so folkstyle isn’t freestyle?
There’s a mercy rule in freestyle?
Any lucha libres coming out?
Is it too early to ask about greco roman wrestling?

Boy do I have a lot to learn……

Last weekend (November 5th), I made my way up to Princeton, NJ for the 52nd annual NWCA (National Wrestling Coaches Association) All Star Classic. Wrestling is a completely new sport for me, as I mentioned in a previous blog. That event was an intra squad wrestle off at George Mason University. This event, though, was an invitational with some of the best college wrestlers in the nation, with non stop action on two mats. There were 22 matches featuring NCAA champions, WCWA (Women’s Collegiate Wrestling Assocation) champions, more All Americans that you can shake a stick at, and to nobody’s surprise, some incredible matches witnessed by a crowd of 5,000!

But I think I jumped into the deep end of the pool on this one after just learning how to doggy paddle. It’s one thing to see an intra squad meet, it’s another to see an event like this. Not only were there two matches at the same time, but the men wrestled collegiate, folkstyle wrestling, the women were wrestling freestyle. Whoa! And to watch the action on both mats? Keep in mind, my blogging up until now was focused on minor league baseball, a leisurely paced game but one that I knew all the rules, and could anticipate where the next play might be.

Fortunately, I was able to ask a lot of questions from someone who knows the sport – Gerald Brisco. If you read my other blog post on wrestling (linked above), he was the one who encouraged me to check it out. We watched the Classic together, and thankfully he made me feel like no question was a stupid question. What a way to learn a sport.

And no, I didn’t ask him all the questions above, but he did point out the differences between freestyle and folkstyle. For example, in freestyle, it’s all about the pin. No points for escape. After a takedown (which you still get points for), if the action slows, the referee will stand them both back up and they go at it again. No ride time, no escape points, it’s all about the pin or if you get your opponent’s shoulders past 90 degrees. Which explains why there’s another official at a table to assist with stuff like that. And the “mercy rule” I joked about? If one wrestler builds a 10 point lead, match over. Technical fall. And some of these matches went fast! In the penultimate womens match, Charlotte Fowler from Campbellsville executed three quick gut wrench take downs and before you could blink, she built a huge lead. She went on to win 14-3.

In the final men’s match of the evening, it was defending NCAA champion Mark Hall from Penn State taking on Zahid Valencia from Arizona State. This was a good old fashioned grudge match. In the NCAA semi finals in March 2017, Hall beat Valencia, and went on to become champion. Valencia took third, winning the consolations. The match was HIGHLY competitive, with no wrestler gaining a clear advantage. In the closing minute, Valencia scored a takedown and took a 3-1 lead, which was the final margin of victory. Interesting that these two wrestled to basically close last season, met in the season opener, and most likely will be wrestling the last match of the season in March 2018! 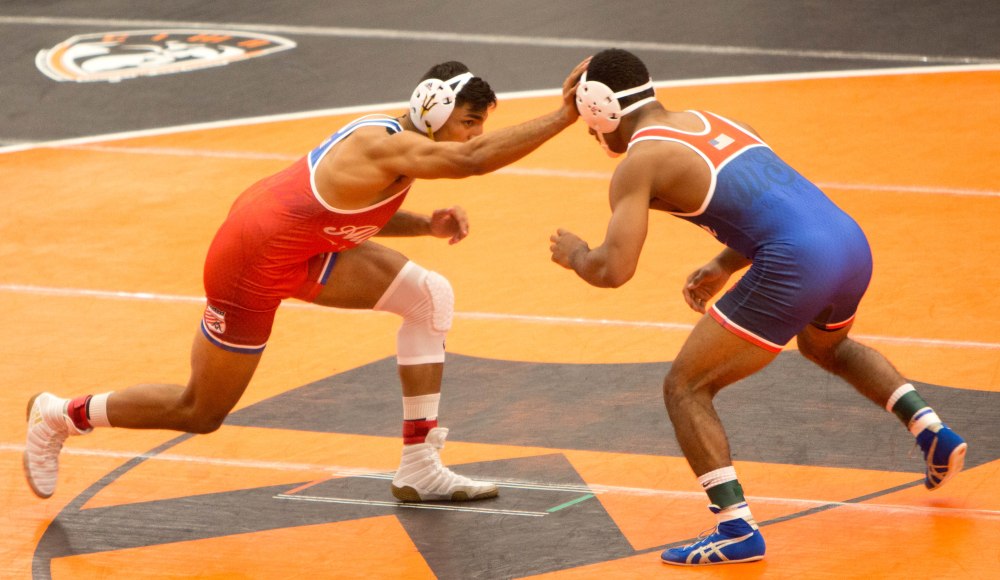 Takeaways from a newbie

It’s WAY to early for me to offer any criticism on this event, and the sport in general. As a matter of fact, it’s action packed and I am already looking forward to my next event. I will say, on the plus side, I was happy there was some announcing going on for each match, which helped me a lot! The only thing I would change, though, was the format for the final event. All afternoon they wrestled two matches at once, which was fine. But I think the luster of finals, Hall vs. Valencia, and two time WCWA champion Mal Velte vs. Desiree Zavala, was lost by having them compete at the same time. But what do I know, considering at major tournaments you can have half a dozen matches going at once!?!

And boy will that confuse the heck out of me!!! 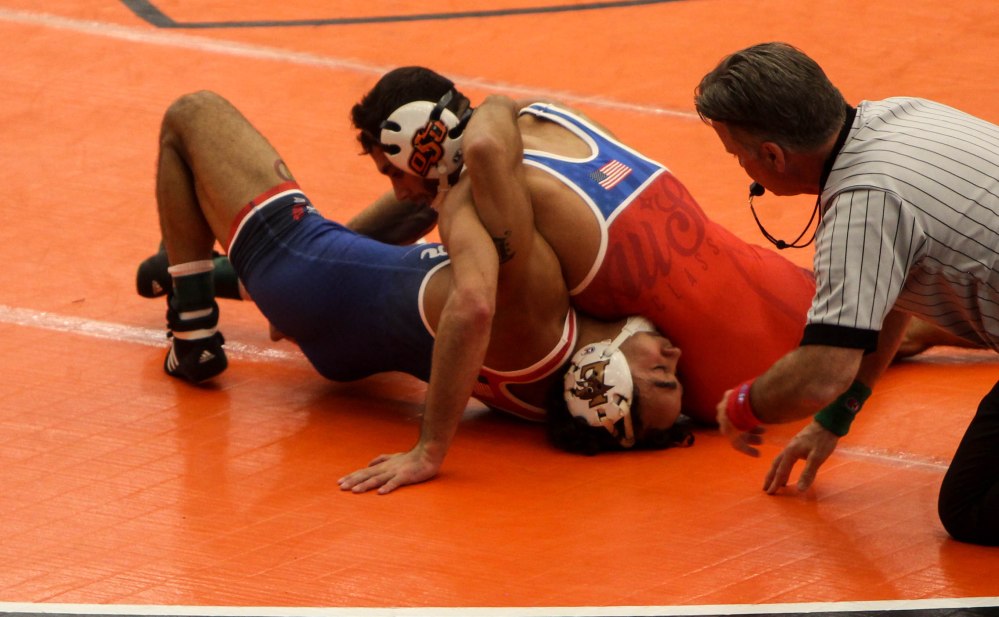 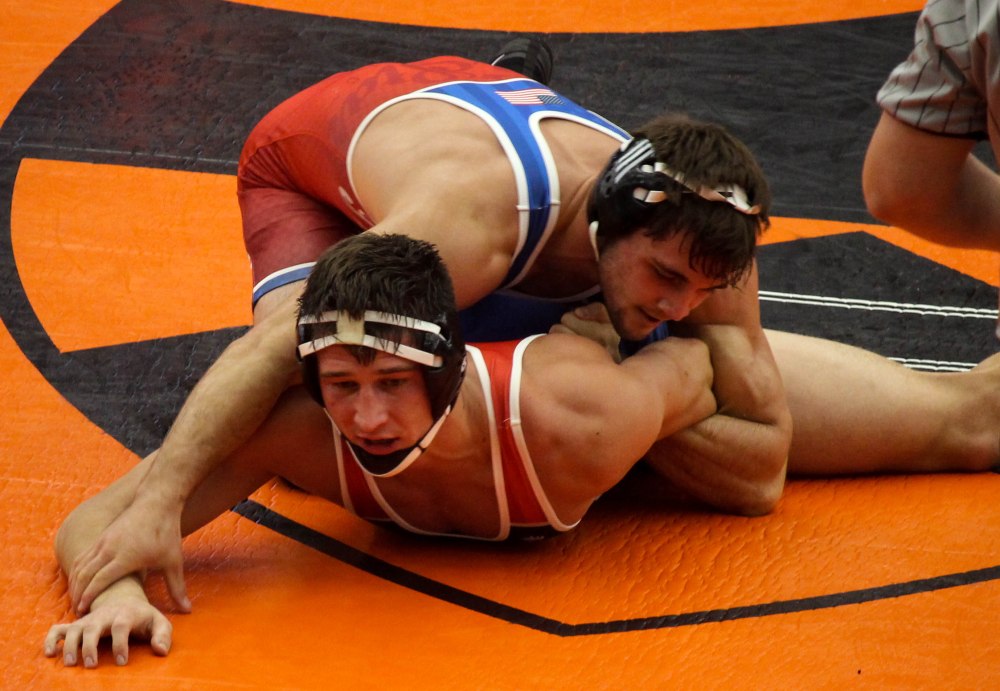 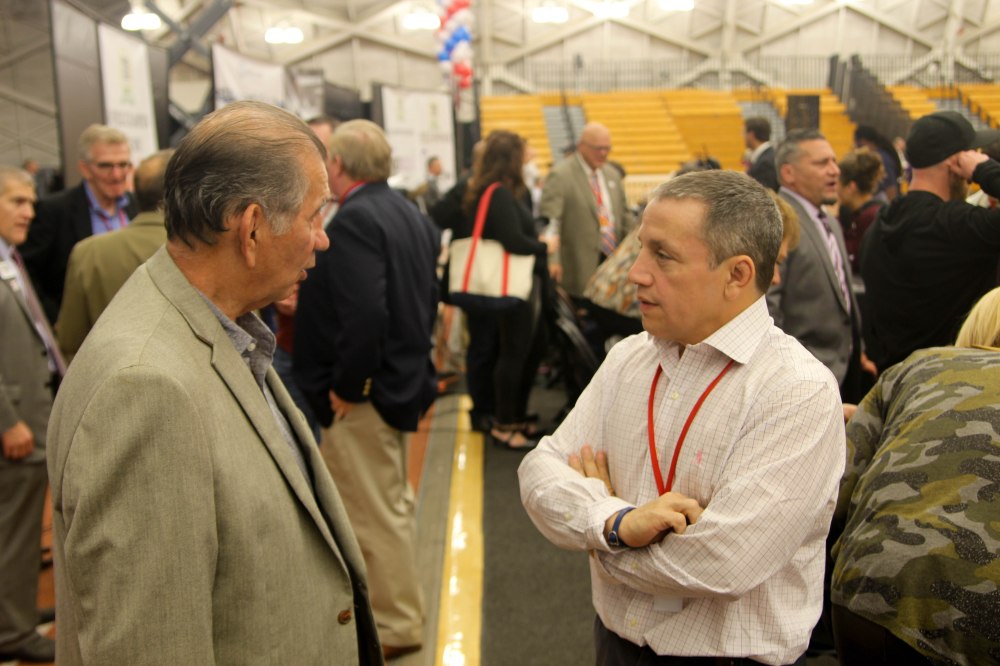