I admit, I laughed at this when I first heard it. Then I tweeted this the other night:

So I guess I have successfully put myself in a perjury trap!

This past week, my siblings and I, along with my aunt, had to venture to Morristown, TN to clean out my great aunt’s condo. She bought this condo, brand new, around 1988, and recently had to move to an assisted living apartment. We all met to clean it out, pack up boxes, etc. It seemed to be an overwhelming task, as my great aunt, who will turn 90 this coming October, was a pack rat! We found magazines dating back to the late 40’s, photos of relatives that nobody could identify, college yearbooks from Florida State University the first year it changed from Florida State College for Women to FSU (yes, they had year books back then), airline receipts from 1990…. you get the idea! We all thought it would take a few days to pack up for the movers and make trips to Goodwill and the dump. It looked like we would be done early on Saturday, and I could travel up to Johnson City, TN to see the Cardinals host the Greeneville Reds Saturday evening. Well, we finished earlier than we thought Friday, so I drove 35 minutes up the road to Greeneville to see the Reds host the Cardinals. I just wanted to relax, watch a game, not worry about taking my camera, just WATCH a game. I accomplished most of that. Great game, great atmosphere, totally relaxed. But Saturday morning came, and I just couldn’t convince myself to stick around another day to kill 10 hours before seeing the game in Johnson City, spend another night in a hotel, and come home Sunday. Even though I really wanted the light saber!! 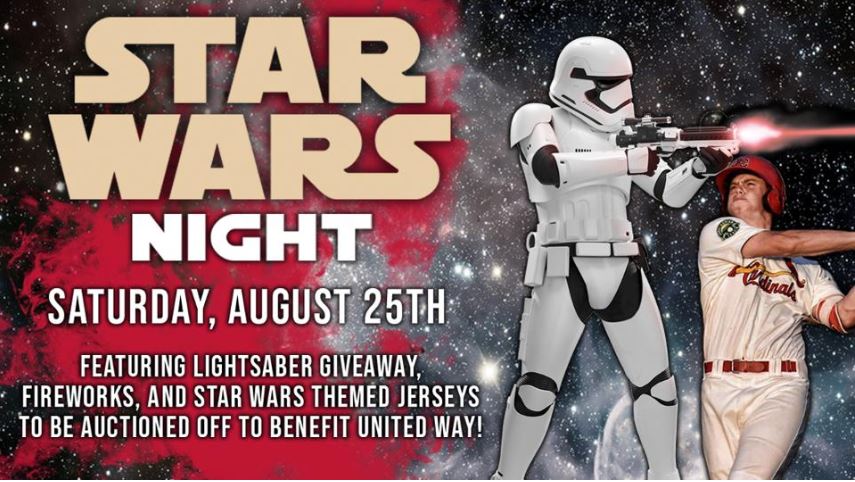 I drove up to Greeneville, arrived late, parked pretty far away (for a Minor League game), bought a ticket, and settled into my seat in the top of the third inning, and was finally able to relax after two days of chaos! I had forgotten how relaxing seeing a Minor League game could be! I arrived late, but I didn’t care. No blog post, right? Just me, watching a game! Pioneer Park is on the campus of Tusculum University, a private university which dates back to 1783. From what I saw, it was a pretty, little campus. Here are a couple of photos outside the park.

A view from my seat:

Usually I would search for a very unique food item, take half a dozen photos with both my iPhone and my Canon camera, and decide which one to post. But I just wanted to enjoy a fun game. I bought a brat and a beer and settled in. No photos! It was yummy. I did get a couple of pictures of some of the food stands. Keep in mind, this is college and Appy League ball, so nothing too fancy, but it was exactly what I was looking for that night!! 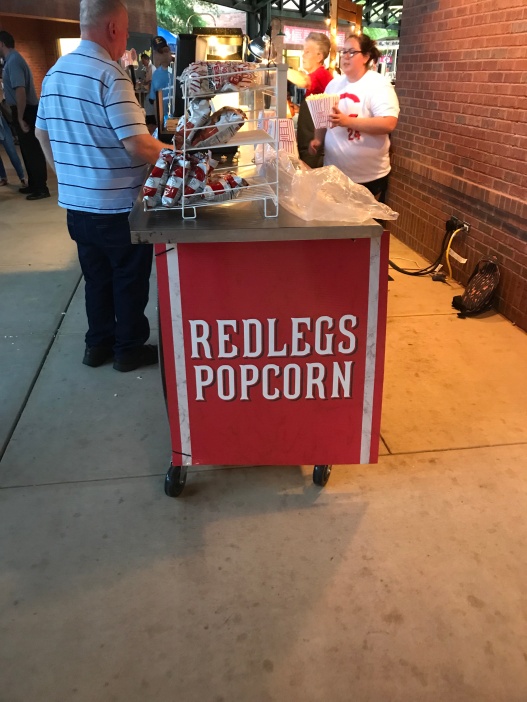 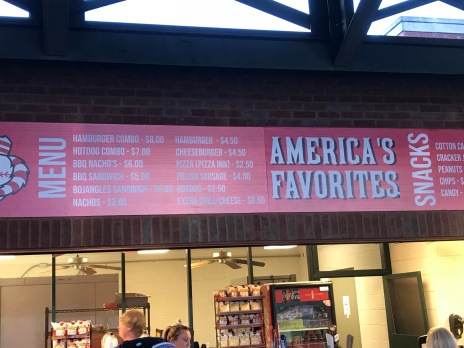 Pioneer Park is one of the most family friendly stadiums I’ve been to in a while. At one point late in the game, a group of young fans down the third base line were chanting “Let’s go Cardinals, let’s go” and then then a group of young boys chanted back “Let’s go Reds, let’s go.” At one point, I think the pressbox got wind of of, and they started to play the traditional organ clip of the let’s go chant! Too much fun.

The Reds did have a few fun between innings games and entertainment that were very entertaining. Again, no photos, I just sat back and enjoyed. They had a sack relay race which was fun to watch. During one of the breaks, they did do the YMCA on each of the dugouts, and pulled some young fans, and I mean young, to join them. One or two of them looked so young I am not even sure they new the letters Y M C or A. It was VERY cute!! 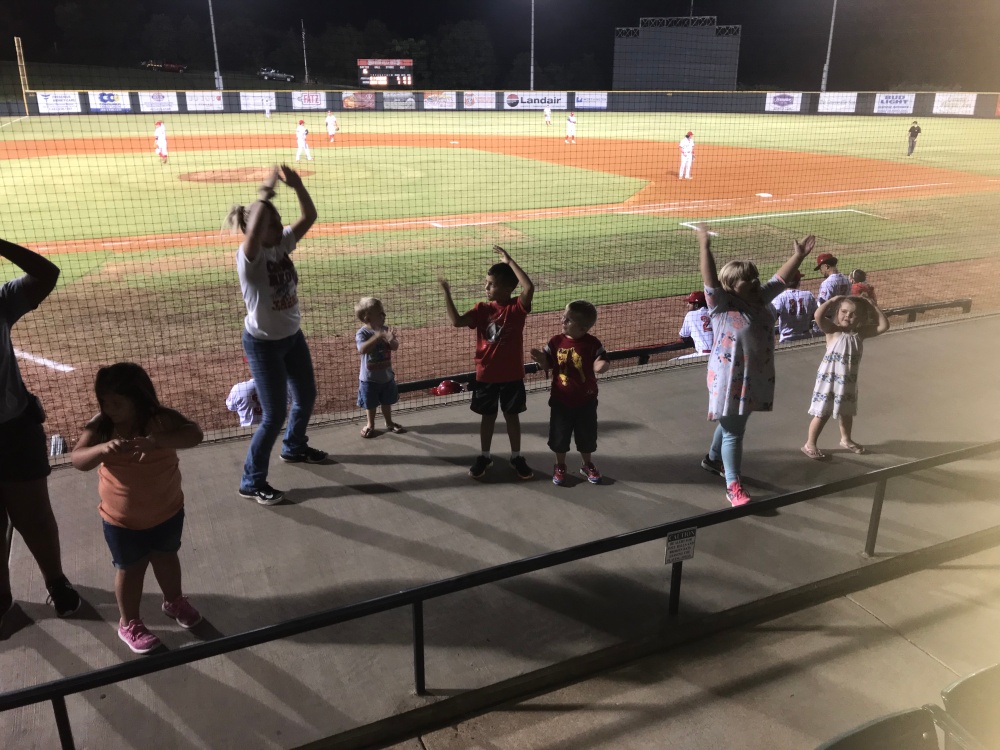 During the 7th inning stretch, they played “Rocky Top” which seemed very appropriate since it’s a Tennessee team. This was a very welcomed change from the usual 7th inning stretch songs I’ve been subjected to.  While not the version they played, be prepared to tap your toes like I did!

Unfortunately the layout of the park didn’t lend itself to a good sunset post. But this is the view behind the park overlooking the university: 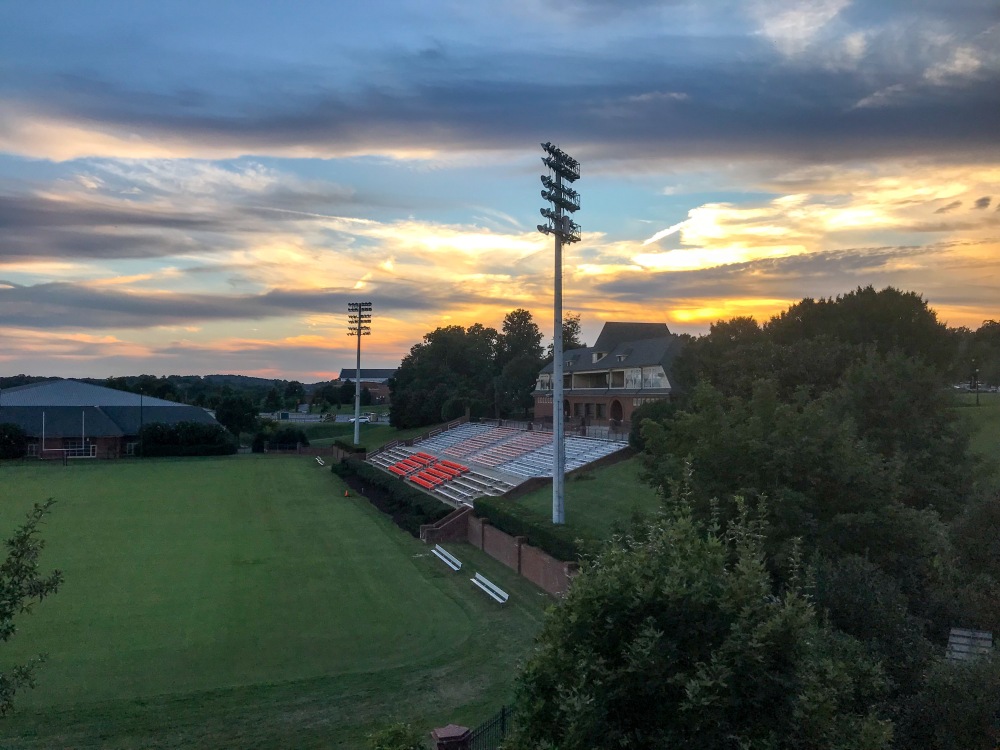 Late in the game, I moved down the third baseline, outside of the netting, hoping to catch a foul ball, but no luck. Oh well.

No in game photos for this game. I left my Canon camera in the trunk on purpose, my goal was to just enjoy the game, which I did!! Sadly, the Reds weren’t able to hold off the Cardinals, and the final score was Cardinals 7, Reds 2. Here are the Cardinals in victory formation, followed by some fireworks photos with a nice full moon in the background.

This post doesn’t do justice to my visit to see the Greeneville Reds. I had a fantastic time, and they even responded to, and retweeted some, of my tweets. How cool is that! I really wanted to catch the Saturday night rematch in Johnson City, but was just too spent. Greeneville, and Johnson City, will be on my list for a full blog post next season. Thanks, though, to the Reds for a very relaxing, fun filled night of baseball!