“In great deeds, something abides. On great fields, something stays. Forms change and pass, bodies disappear but spirits linger to consecrate ground for the vision place of the soul. And reverent men and women from afar and generations that know us not and that we know not of, shall come here to ponder and to dream and the power of the vision shall pass into their souls.” Joshua Lawrence Chamberlain

These moving words from Col. Chamberlain, a Union soldier in the Civil War, grace the entrance to First National Bank Field in Greensboro, home of the Grasshoppers. While Chamerlain was speaking about the battle of Gettysburg, his words are moving and prominent as you enter this wonderful stadium. While I didn’t know the background of the quote before entering, it set the tone for a great afternoon of baseball. 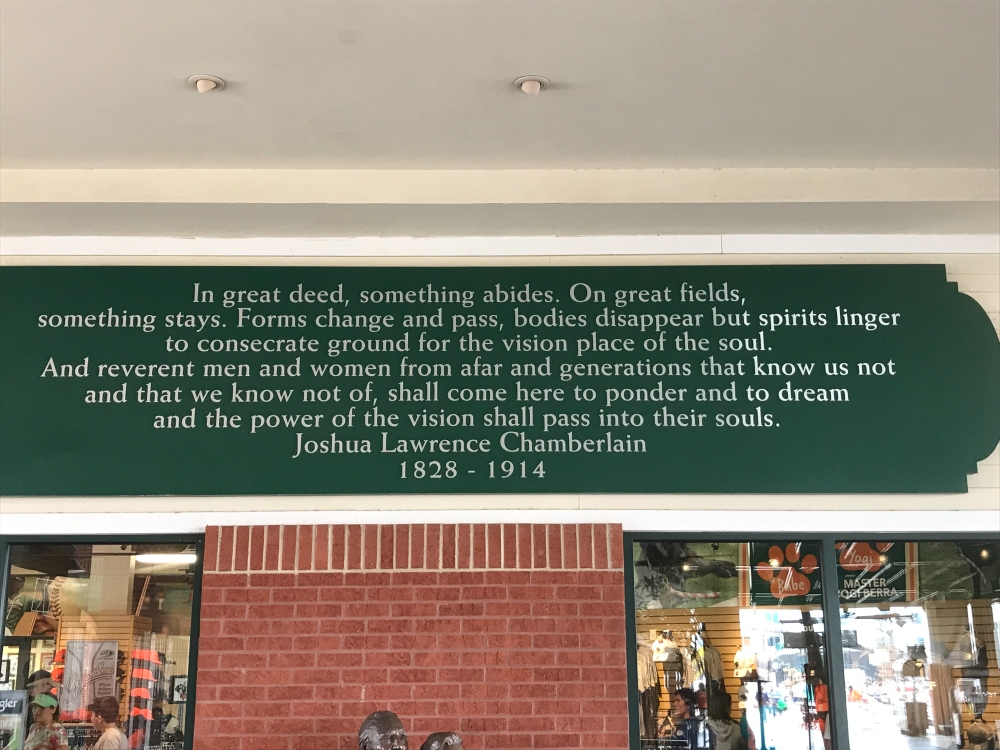 What a difference a year makes

In April of 2018 I ventured down to Greensboro for the opening weekend of Minor League Baseball. While driving down, the game was cancelled due to snow and rain! I stopped by the stadium and able to get one selfie:

A year later (and a few pounds lighter) it was a great day for baseball!

Although I had to wait a year to see the Grasshoppers, it was well worth the wait!

I started the weekend in Kannapolis, visiting the Intimidators. You can read my full write up here. Then I made my way to Greensboro for an afternoon tilt with the Hagerstown Suns. Both the Grasshoppers and the Intimidators play in the South Atlantic League, which are Class A affliates of the Pirates and White Sox respectively. From 2003 to 2018, the Grasshoppers were affiliates of the Marlins, which was evident of the sale they were having in their souvenir shop.

For a Low A team, I have to say their shop was pretty impressive!

Let’s cut to the chase. Most know my blog is about baseball food. And I have to admit, for a Class A team, the Grasshoppers offered major league food options! Here are some options around the park. 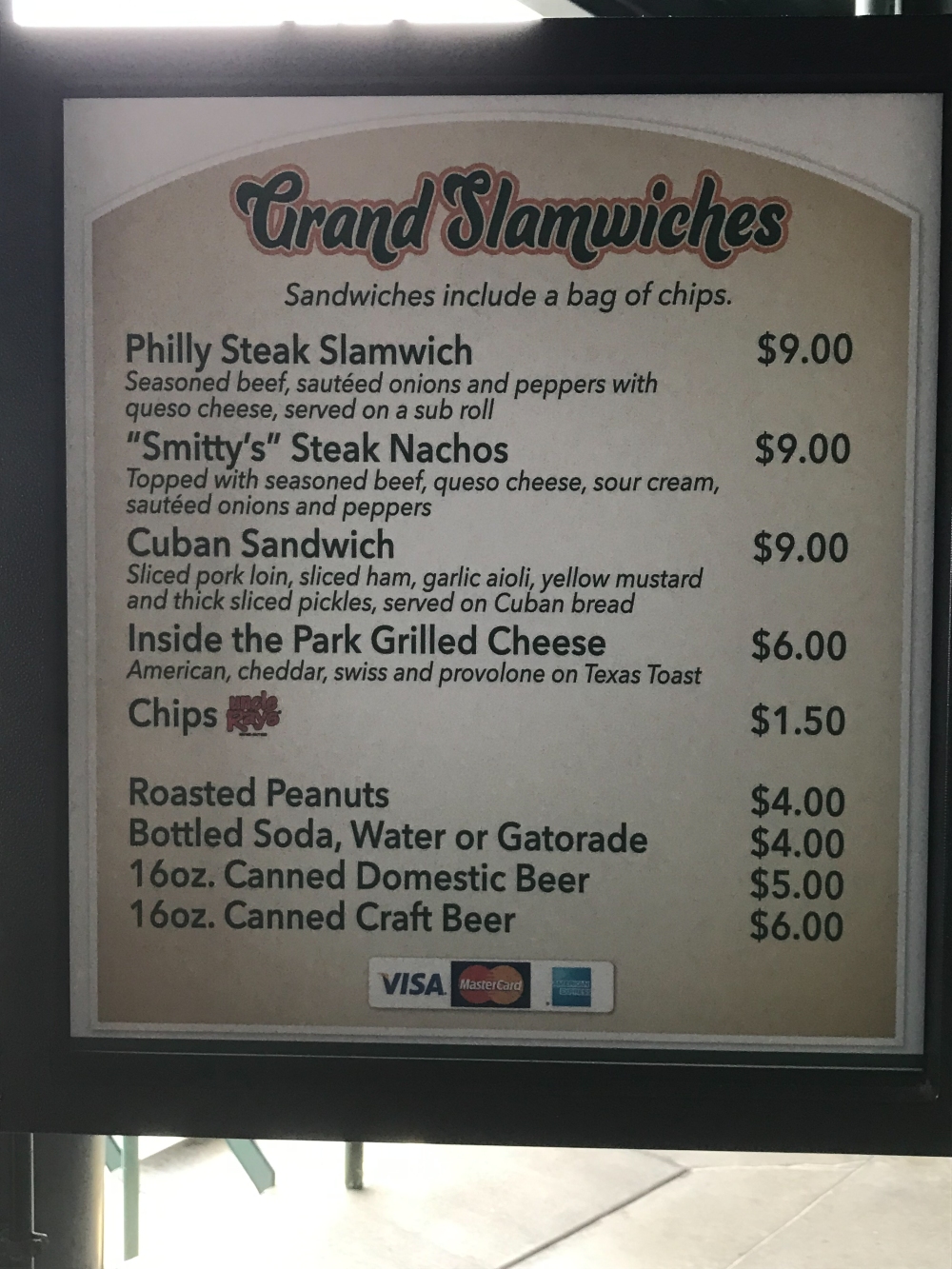 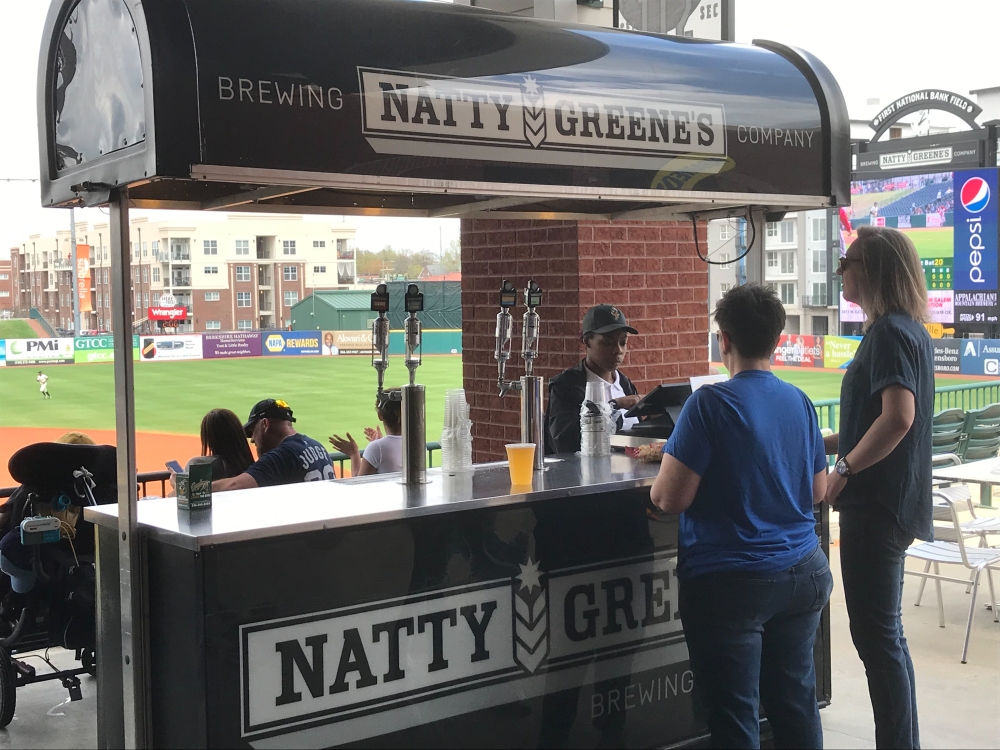 For my first course I opted for the Hank Aaron-ing for Spicy dog. It did not disappoint!

I was really thinking of the tacos, as they were freshly made:

I ran into a local fan who was ordering some tacos, and this was the final product: 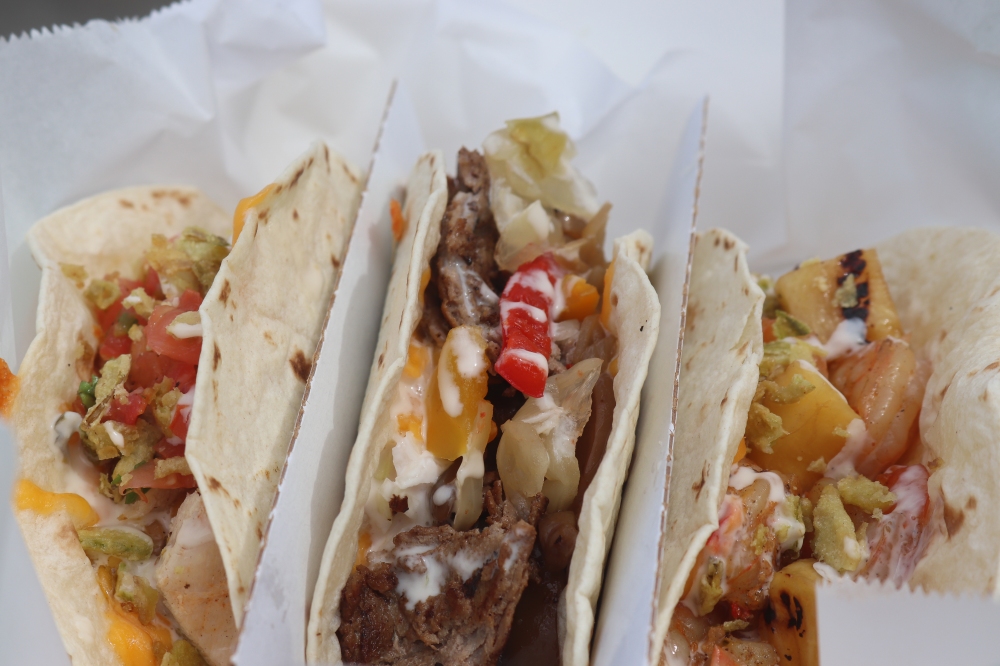 Late in the game I opted for some wings. Yum!

The Grasshoppers also had a really cool bar down the left field line. 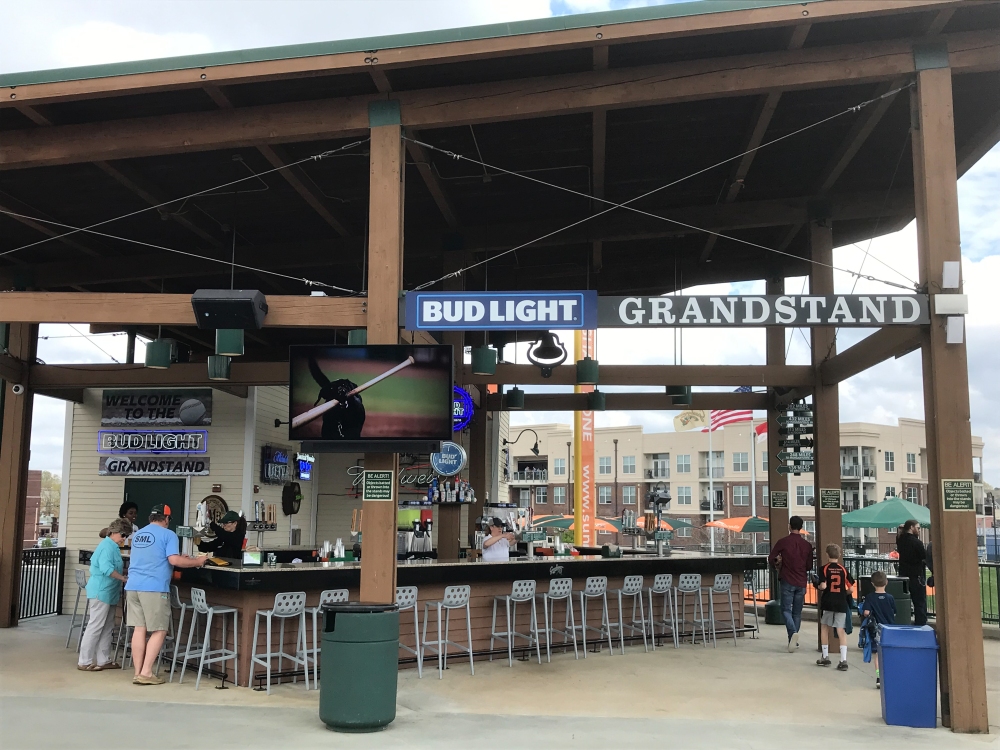 Great view of the stadium from the bar and outside seating.

The fans were great! Very friendly, and in tuned with the game, for the most part. Down the right field line, many young juniors were hoping for a foul ball.

At one point, I was sitting in the stands and overheard a conversation between some fans and one was trying to explain the infield fly rule to someone. With just one runner on, the fan said that the fly rule applied so that the runner wouldn’t be out. I made a casual glance to another fan, and we just smiled at each other knowing that it’s really with runners at first and second, or bases loaded with fewer than two outs. I said, “eh close enough” and he laughed. We decided not to correct him because it was a great day to watch a game!

Unless this fan was reading an unredacted version of the Mueller report, I can’t imagine being distracted during the game!

The last couple of years, most parks have added extra netting down the lines to protect fans from line drives. I do support this as a fan, but for photography’s sake, it ruins good pictures!

That said, the sight lines in Greensboro were great, and once I adjusted for the additional netting, I was able to get some pretty good pics. 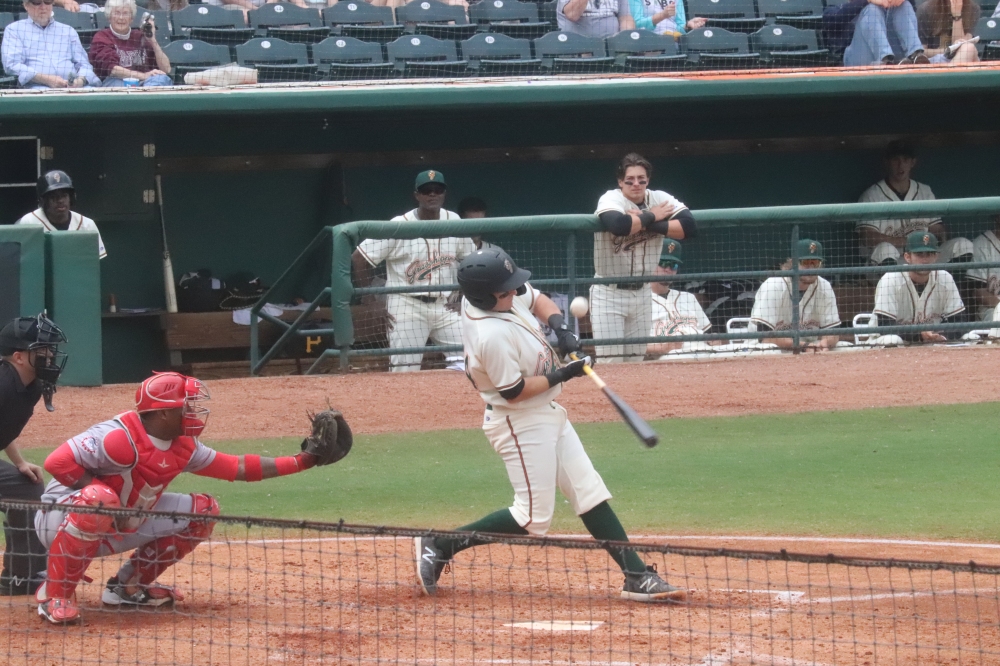 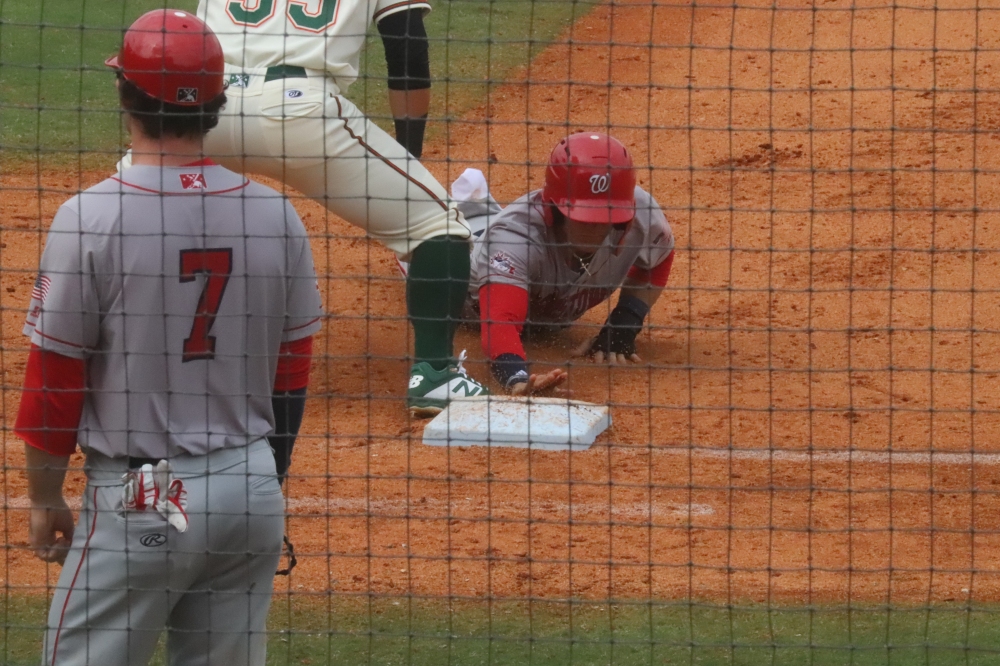 In the end, the Grasshoppers took a walk off win! 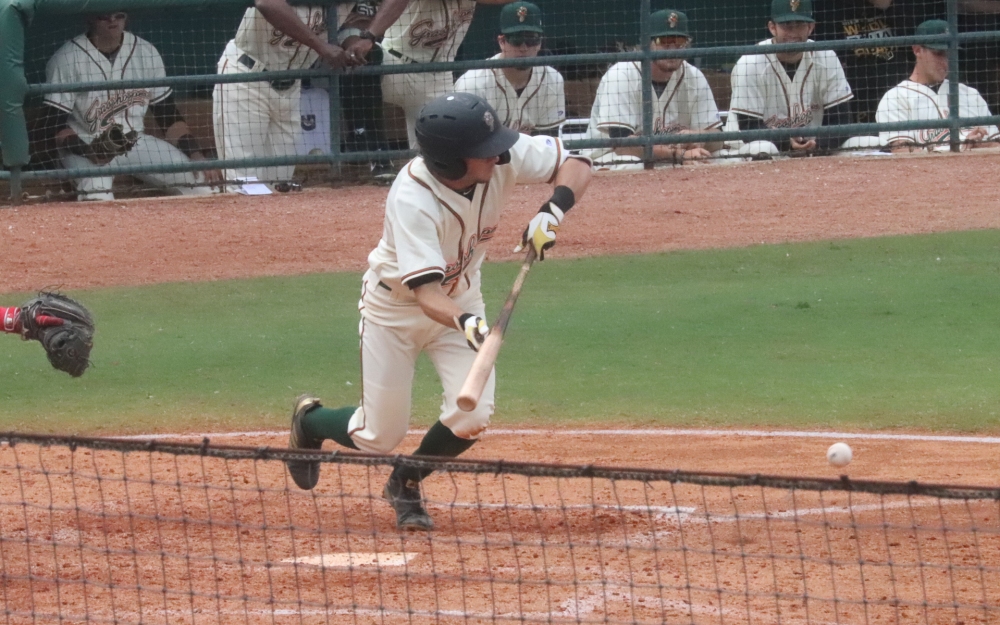 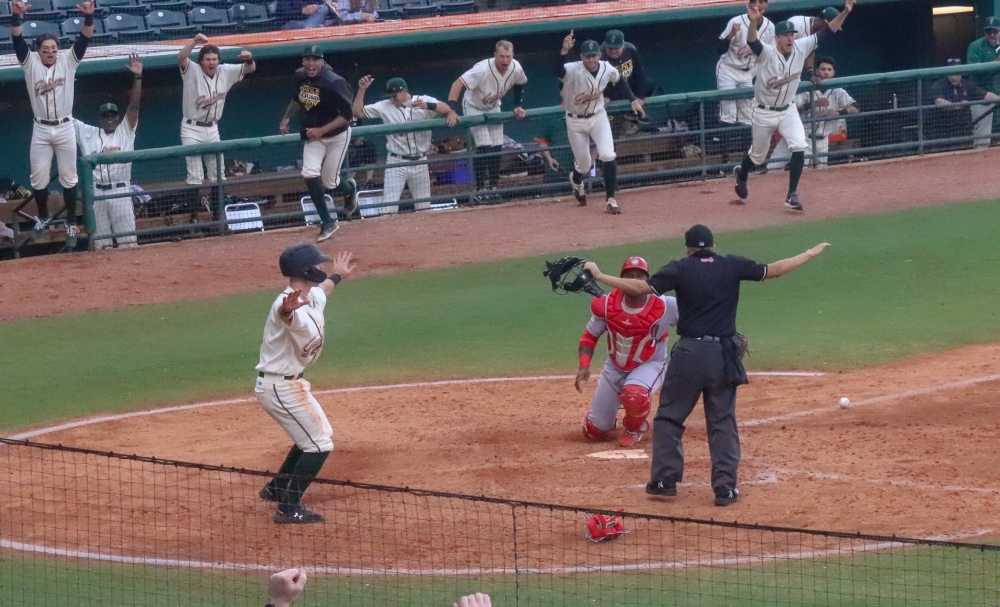 While I had to wait a year to see the Grasshoppers, I am glad I came back. Great fans, great game, great venue. I am sure I will be back! And happy birthday to Memphis. I hope he had as much fun as I did!