The atmosphere seems to change once the sun goes down and the race fans get to watch a good show. Dale Earnhardt

The same could be said for Intimidators Stadium in Kannapolis, home of the Intimidators. When I pulled into the parking lot, the stadium wasn’t all that impressive. But as the night went on, and the action picked up, the atmosphere and show began to grow on me, and I developed a good home town feeling about this park.

Intimadtors Stadium (formerly Fieldcrest Cannon Stadium and CMC-Northeast Stadium) opened in 1985. It’s the third oldest stadium in the 14 team South Atlantic League, behind McCormick Field in Asheville (opening in 1924) and Municipal Stadium in Hagerstown (opening in 1930). At 33 years old, it’s definetely showing signs of age, and it’s no wonder they are moving to new digs begining next year.

The seats definetly need upgrades. There are no cup holders, they are pretty small, and the numbers are worn off. They remind me of the seats at the Prince William County Nationals, who are also getting a stadium upgrade. In fact, when I arrived at my seat, it was occupied by someone else, also with a big camera. I was polite, and I chalked it up to their party not being able to see the seat numbers.

The field could use some work as well. Keep in mind this was opening week. The field looked as though a full season had been played.

Now that I’ve gotten that out of the way, let’s get to the good stuff! While the stadium is a bit old, it’s a great place to watch a game. There’s a single lower bowl, and all the views are unobstructed. It’s really a very intimate setting like many older ballparks have.

Adding to the small town flavor of the Intimidators is that during the mid game infield raking, part of the groundscrew are players and staff from the Initimadors bench. I thought this was pretty cool!

And as is the case with almost every minor league park I’ve been to, the fans and staff were super friendly. I wanted to limit myself to one food item (more on that in a bit), so I asked some folks if I could take photos of their choices. Just imagine if you were approached by a random guy with a camera bag and he asked you if he could take pictures of your food! But fans in Kannapolis (and in Greensboro in my next post), they all obliged and didn’t look at me like I had two heads!

They also have a really old carousel that I am sure has a lot of history. I’m kicking myself for not getting any info on it. I hope they move this to the new ballpark, it would be a great contrast of something old, something new.

The souvenir shop, while on the small side, had some great choices. I struggled with what to get.

In the end, I decided that when the team moves, they can possibly recycle a cap with a “K” but since they are changing their name, I had to go with the classic “I” cap!

So this year’s posts on food will be a bit different. Just before Thanksgiving I decided to make some lifestyle changes and lose weight. I’m down 45 pounds and still have about 20 or so to go. The days of getting two or three meals at a game have come to and end. I can do one nice, photogenic item, then ask folks if I can get some photos of their food. I will probably put a call out to teams for a “designated eater” and pay for a couple of things. The concessions at Intimidators Stadium were fairly limited but they had a BBQ food truck that I just HAD to visit!

I ordered a BBQ sundae: baked beans, then mac and cheese, bbq pork, then topped with a little slaw. It’s one of the best things I’ve EVER had at any park!

A couple other options were freshly made ultimate nachos, and some really good looking desserts. While I did pass on these, they left my mouth watering. North Carolina is also known for its exploding number of micro breweries. There was no shortage of craft beers at their beer garden. 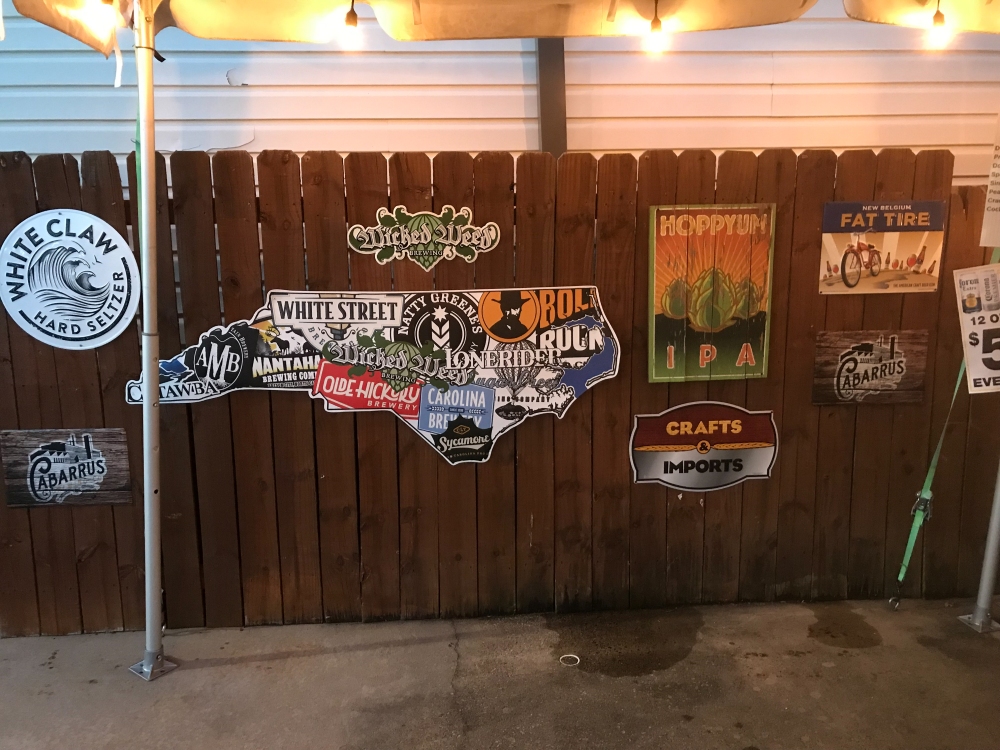 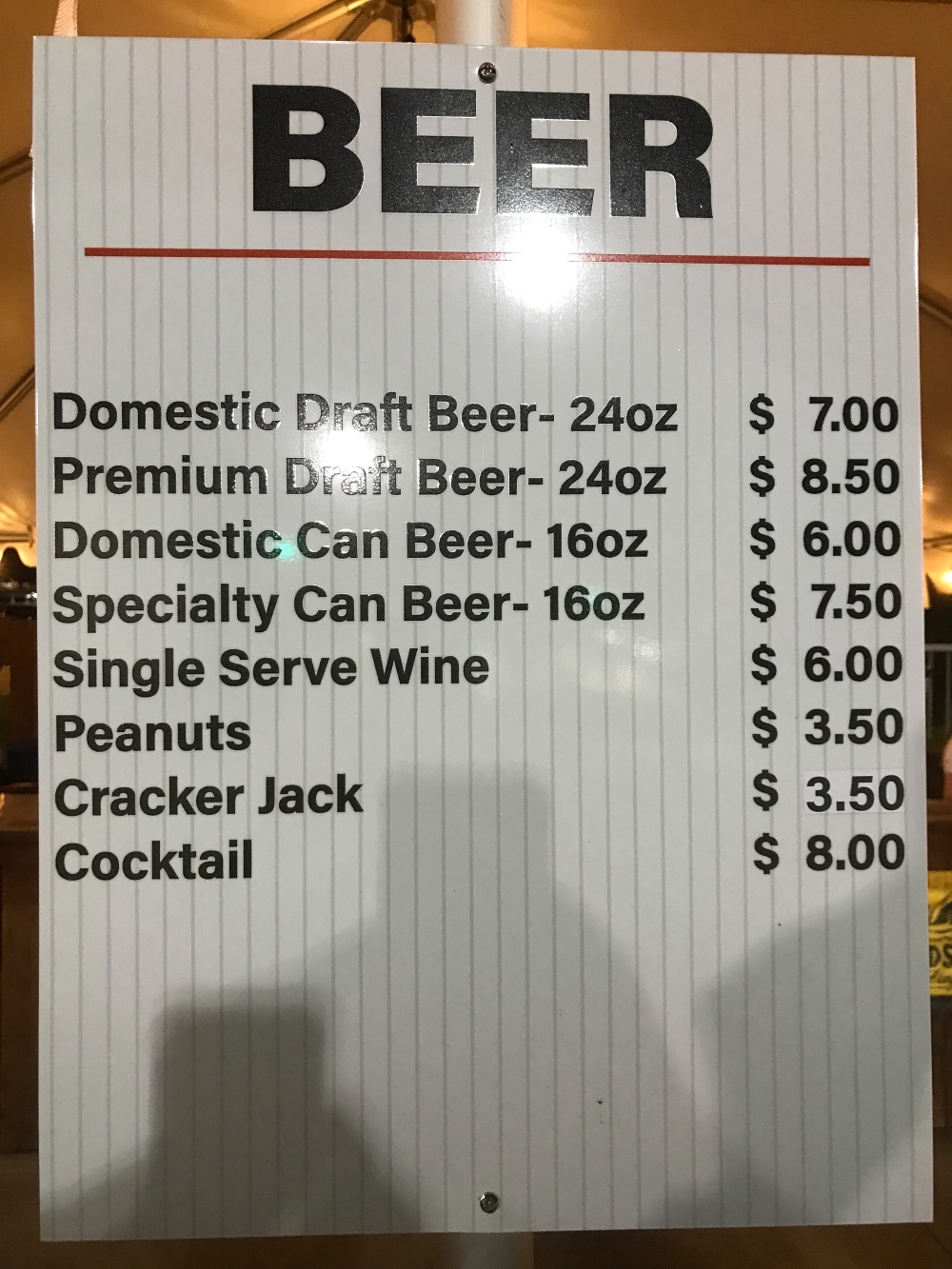 I didn’t get as many game photos as I normally do, only because I was enjoying just watching the game. One of the first plays that I saw, though, was this close play at first. And yep, he’s out!

Here are a few more: 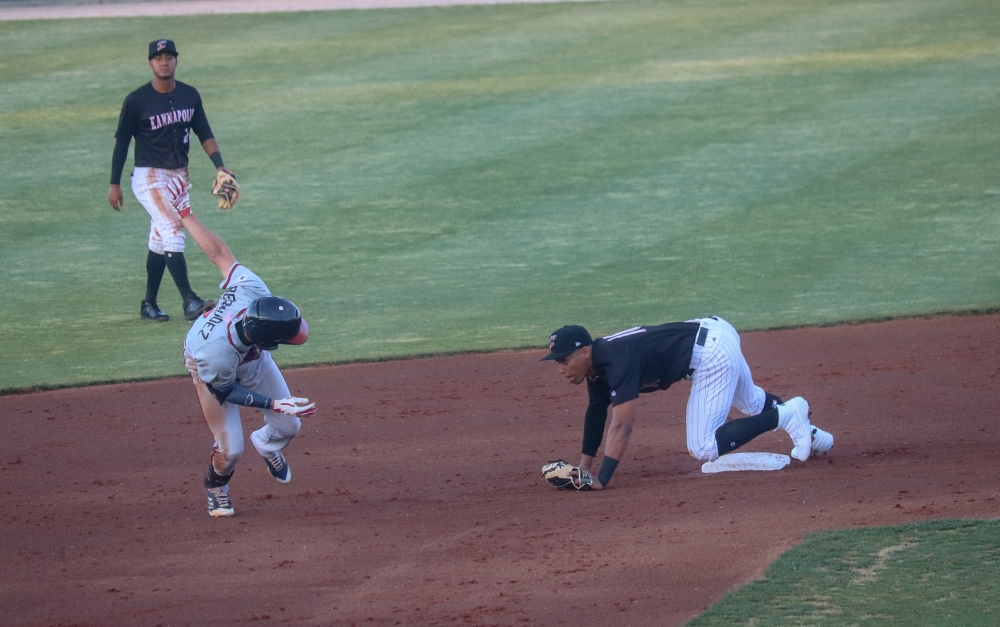 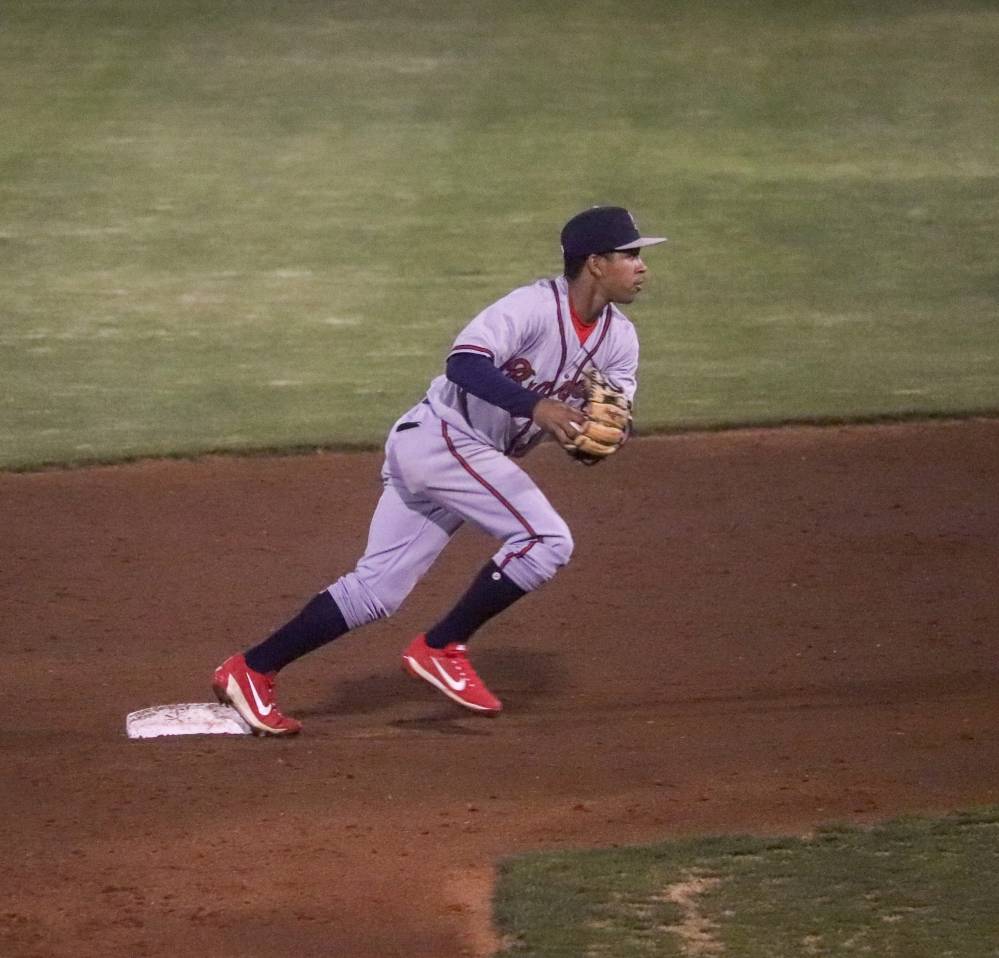 Minor league baseball on a Saturday evening never lets me down, and the Intimidators were no exception. I’m sure some will not miss it when they move to their new stadium next season, I’m glad I got to see this old gem before it’s gone. And although I didn’t come away with a foul ball, I hope these guys did. Good luck trying to do this at a major league park, I am sure security would have something to say.