Last month was a big month for George Mason University wrestling. On one night, not only did they host their first dual ever inside EagleBank Arena, they also debuted some cool new uniforms. And I have to say, both the unis and the wrestlers were sharp!! The Patriots came from behind to defeat the Bears 19-15.

I was lucky enough to get a press pass from GMU, so I was down on the floor taking pictures. As usual, the action was awesome, and I am slowly starting to pick up some things along the way. One really cool move, though, I didn’t capture on camera. However, I was able to see the replay on ESPN. Check out Kolby Ho’s acrobatic move:

The rest of the action was equally as impressive. Mason got off to a bit of a slow start. They started at 184, and Paul Pierce lost a heartbreaker 3-1 in overtime. 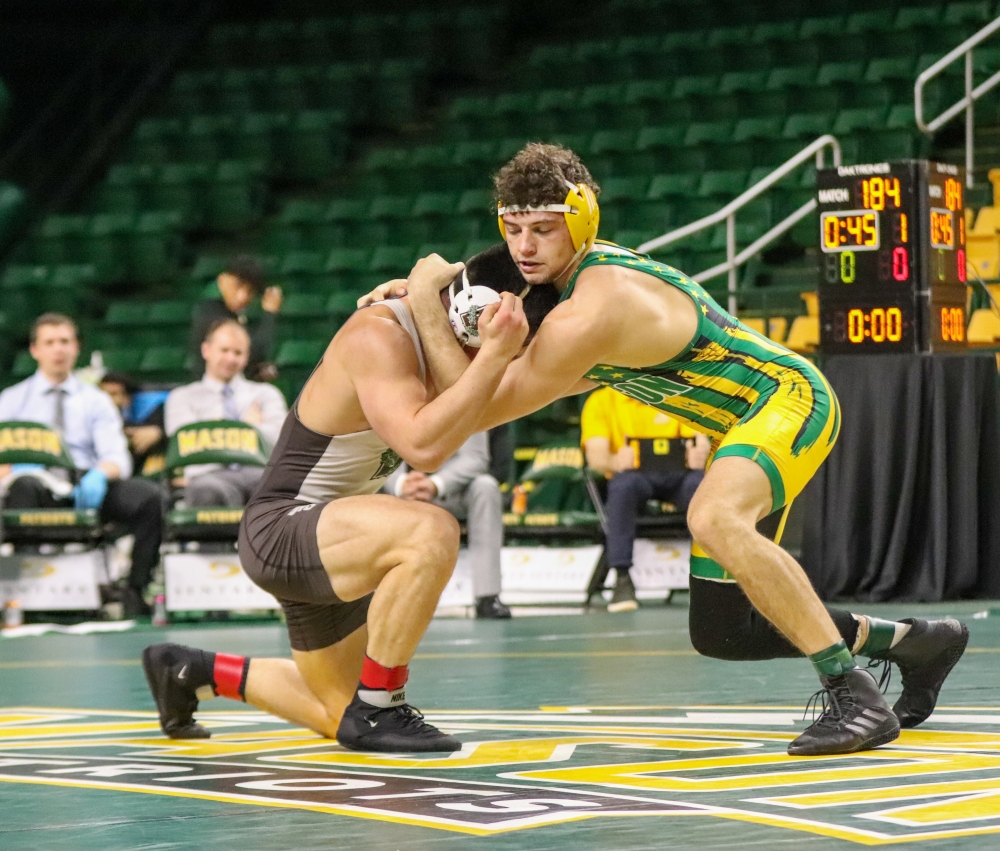 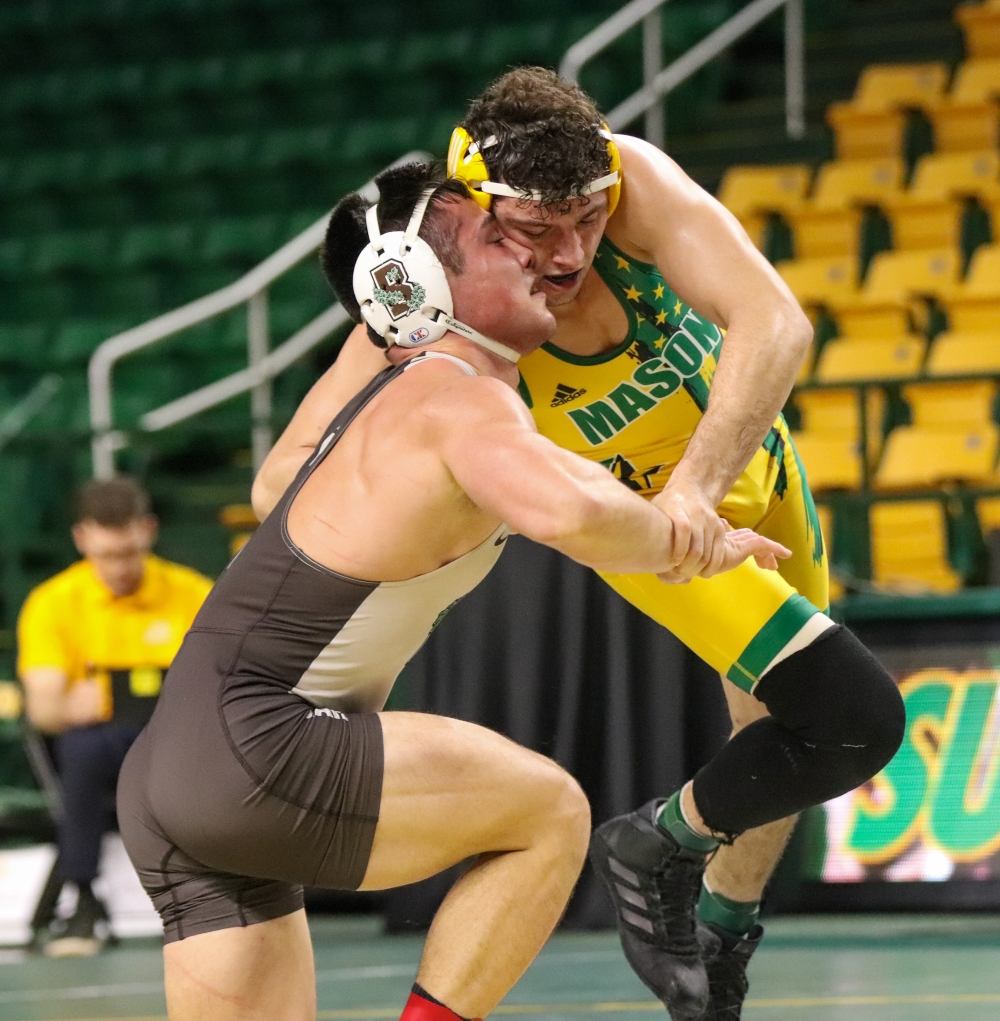 Jake Slinger took over and scored a major 10-2 decision to get the Patriots back into it. He was up 4-0 heading into the third period, and scored two more late take downs to seal the deal! 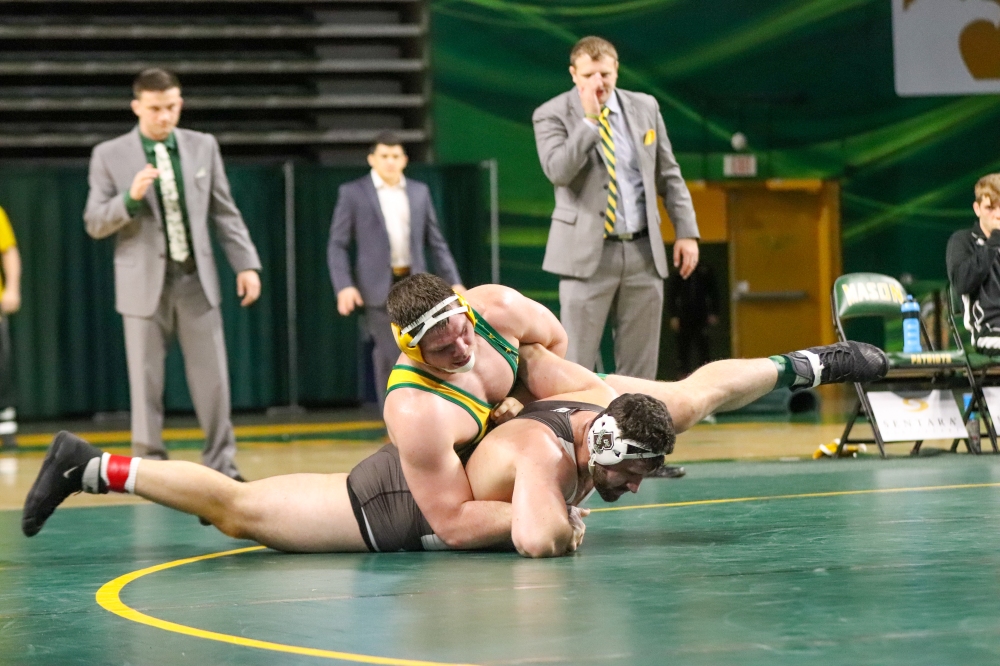 Slinger’s “never give up” attitude won him the hammer award for the match! Here he is with honorary coaches Kathy McKay and Elia Ahmadian. Talha Farooq fought hard at 125 but took the loss.

Freshman Josh Jones continued his stellar rookie season with GMU with a 10-6 win. Late in the match, Jones was up just 7-6 but had a nifty escape and take down late to secure the victory.

Senior Alex Madrigal was up next, and took the win, 6-2, which brought his overall record to 18-8 for the season. 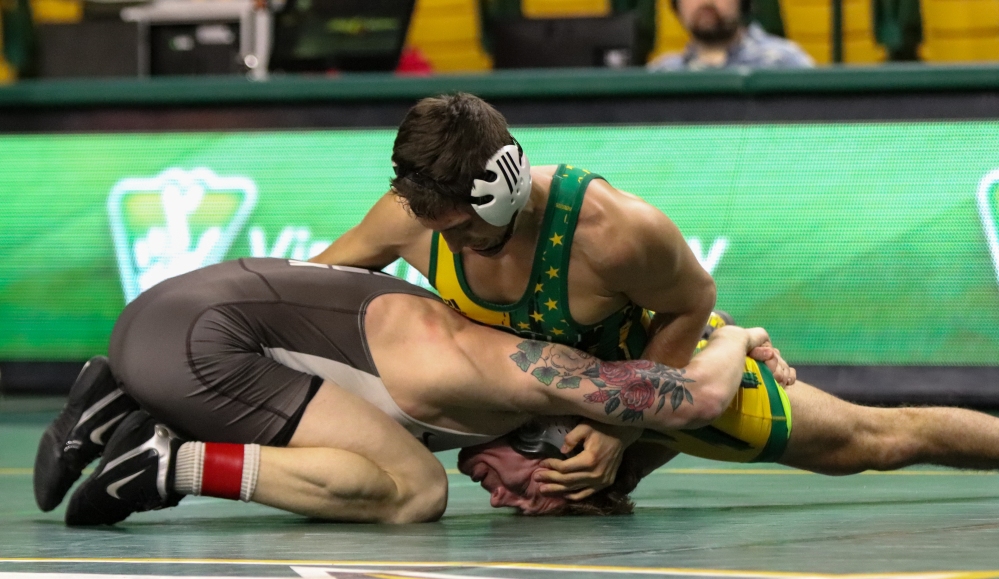 GMU took its first lead of the dual with Colston DiBlasi scoring a 3-0 win in a hard fought match. This was DiBlasi’s 99th career victory! Mason was now up 13-11. 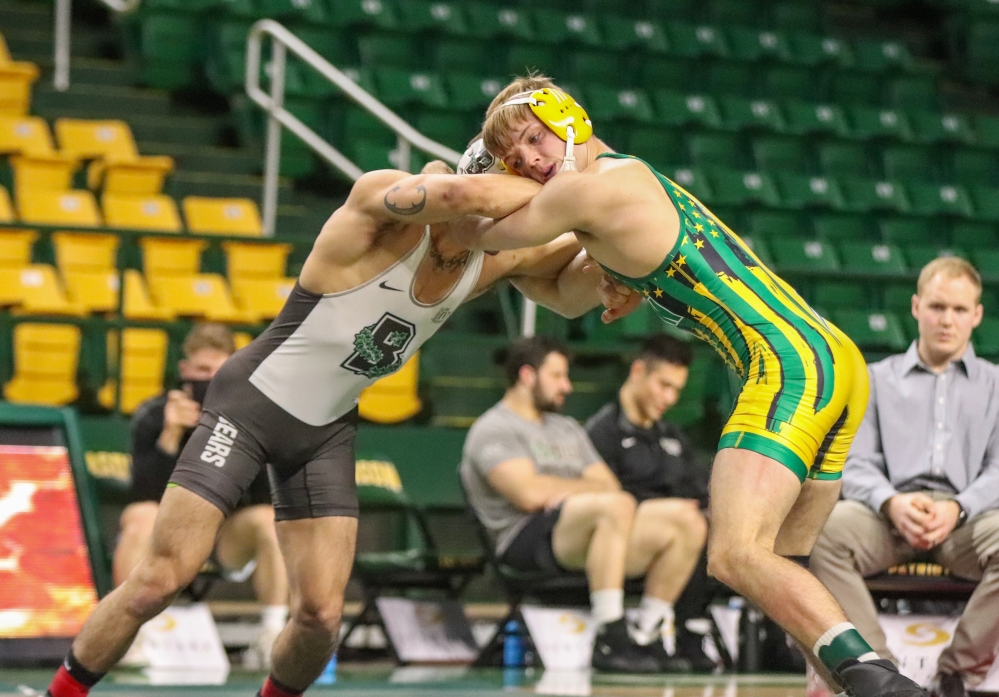 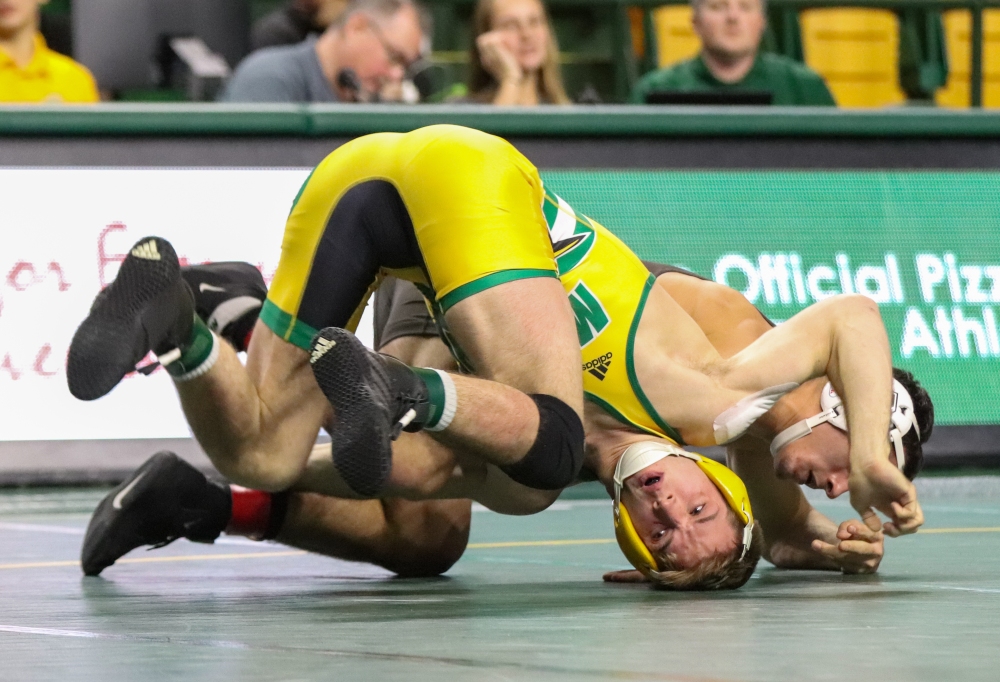 This is one of my favorite shots of the night. Really shows DiBlasi wrapping up his opponent! 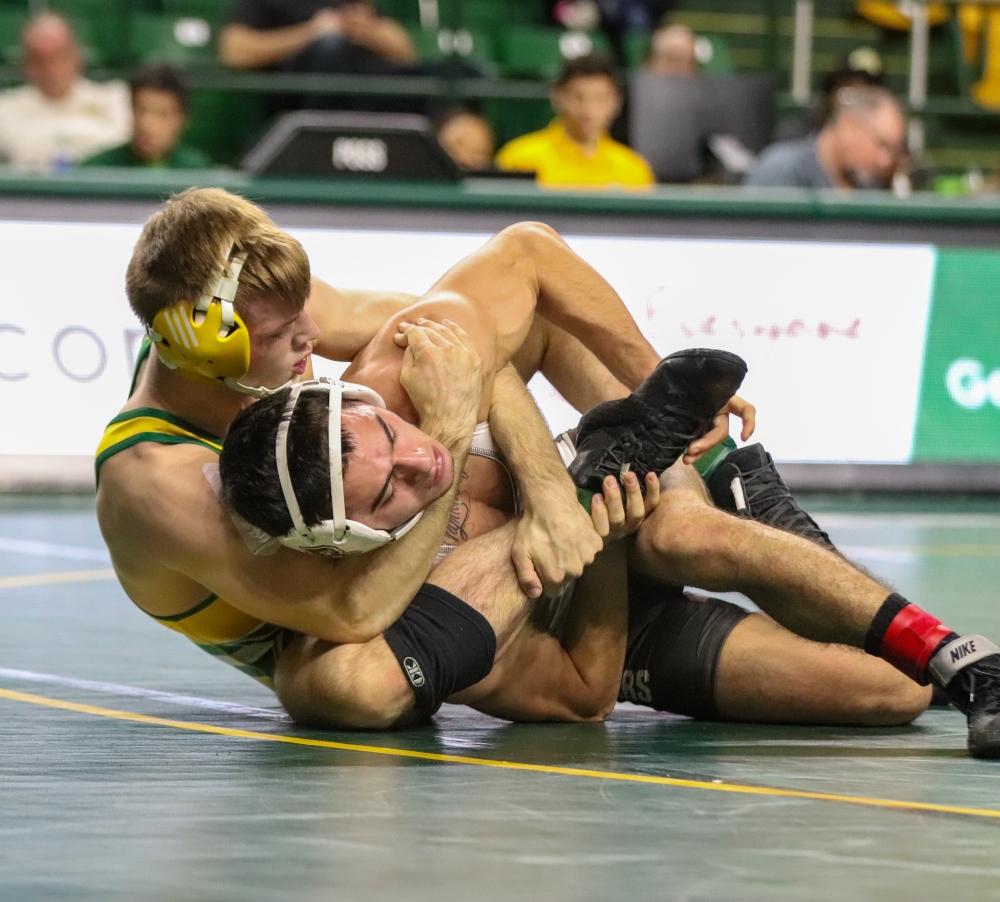 This really got the coaches fired up!

Kolby Ho scored the fourth straight Patriot win, taking a 15-8 decision. Ho scored a takedown with six seconds left in the second period to take a 9-5 advantage into the final period. The sophomore would earn three takedowns in the period, including one at the buzzer. 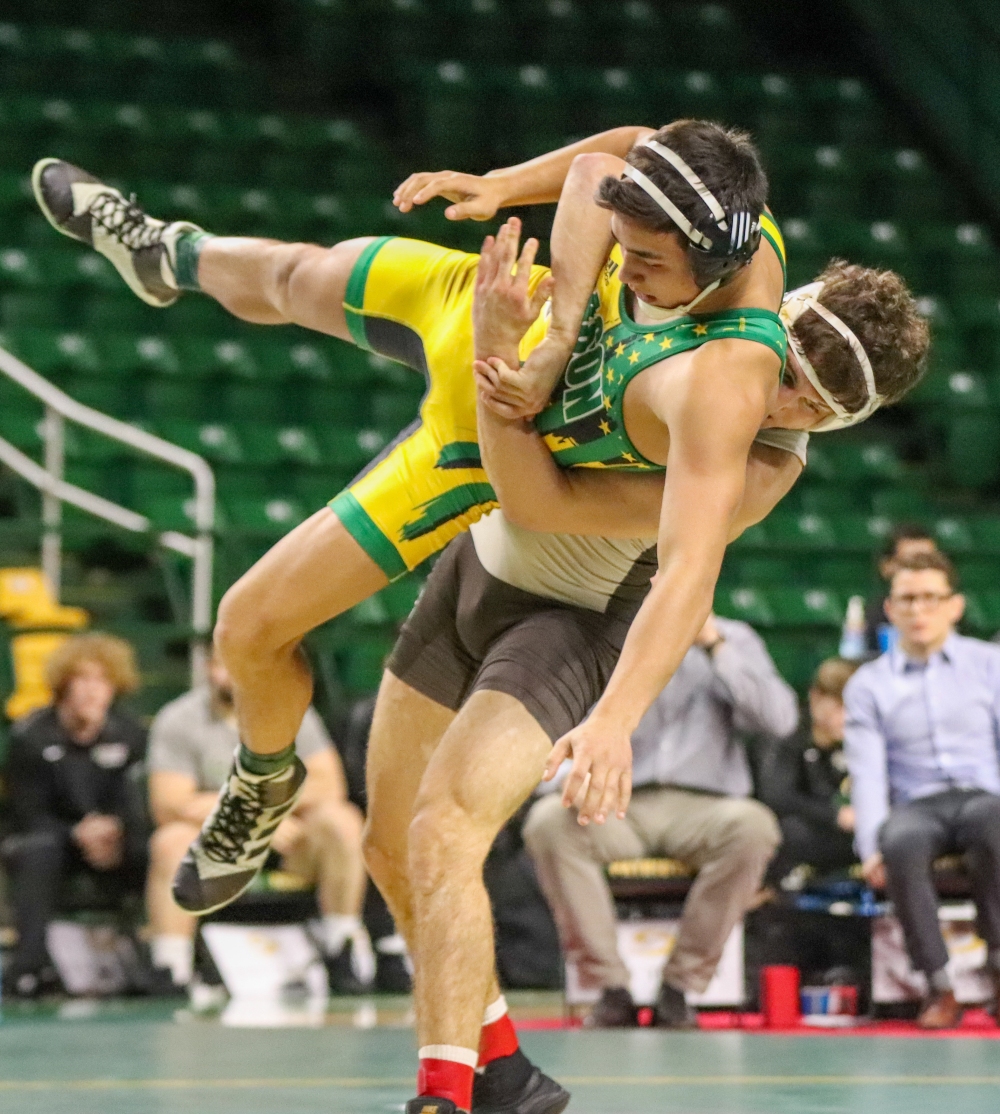 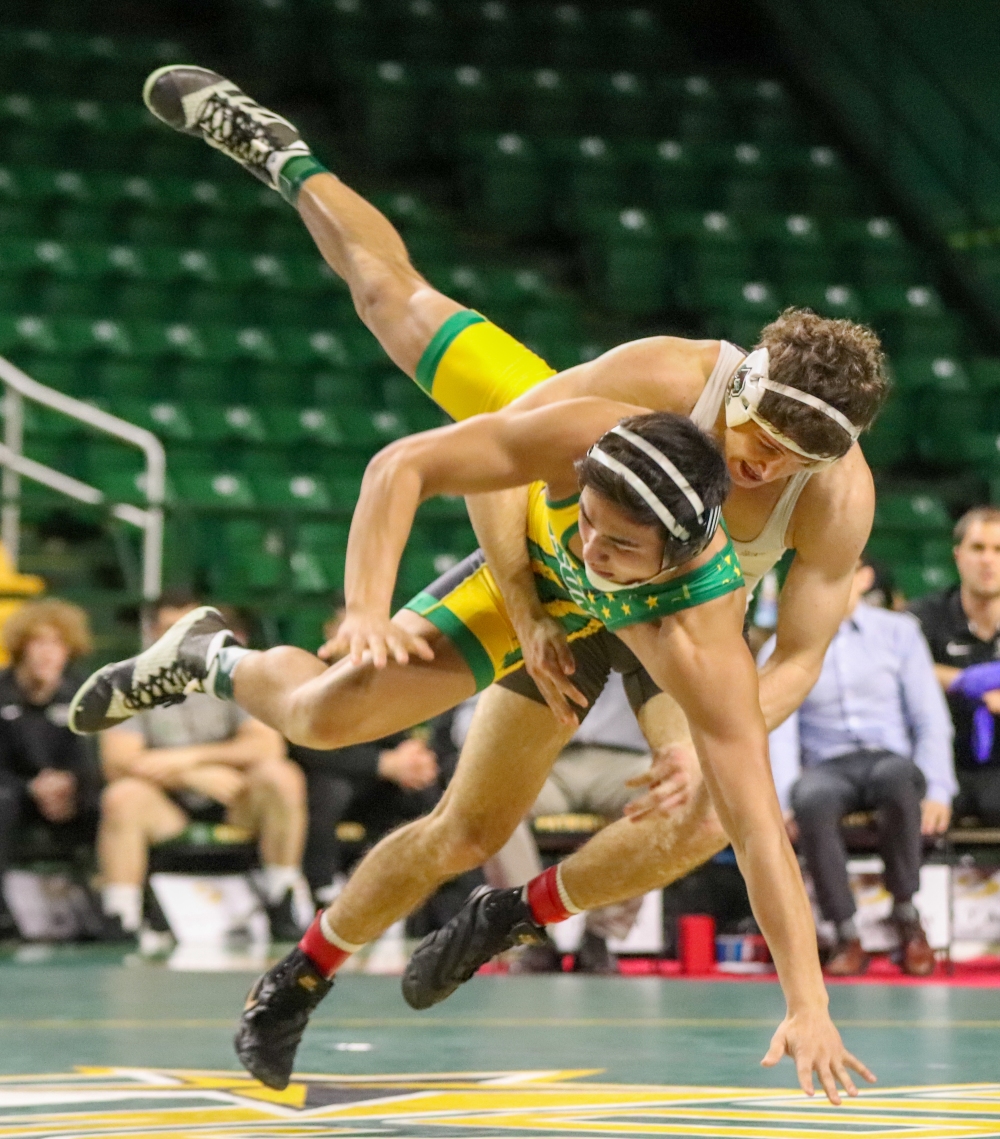 Justin Yorkdale dropped his match, and Brown closed the gap to 16-15. 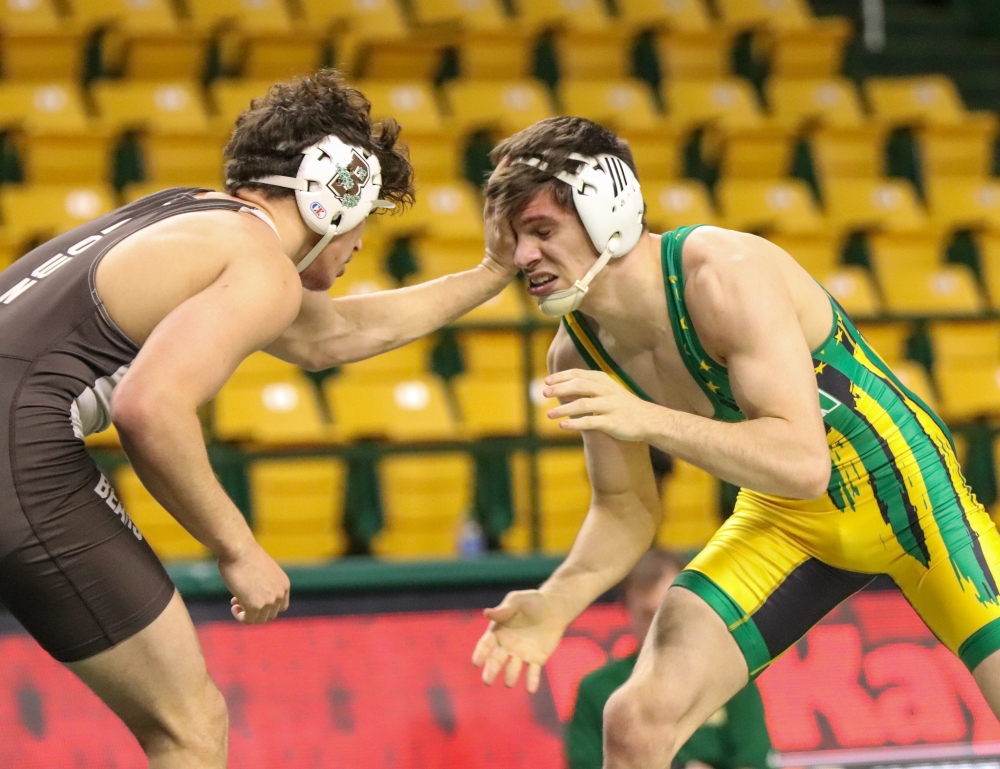 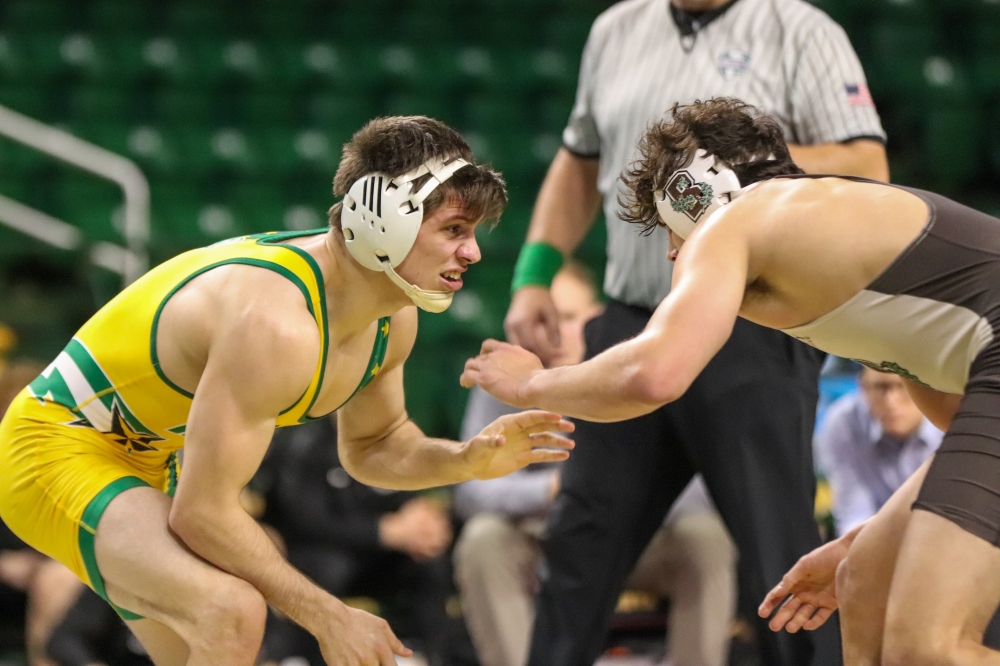 This set up a winner take all final match, and grad student Anthony Lombardo didn’t disappoint. Lombardo took the decision 10-4, and GMU secured the victory, 19-15.

I really like this series of shots. Not only does he have his leg hooked, but he maintains control of his opponent’s head and neck with his other arm all the way through the takedown. 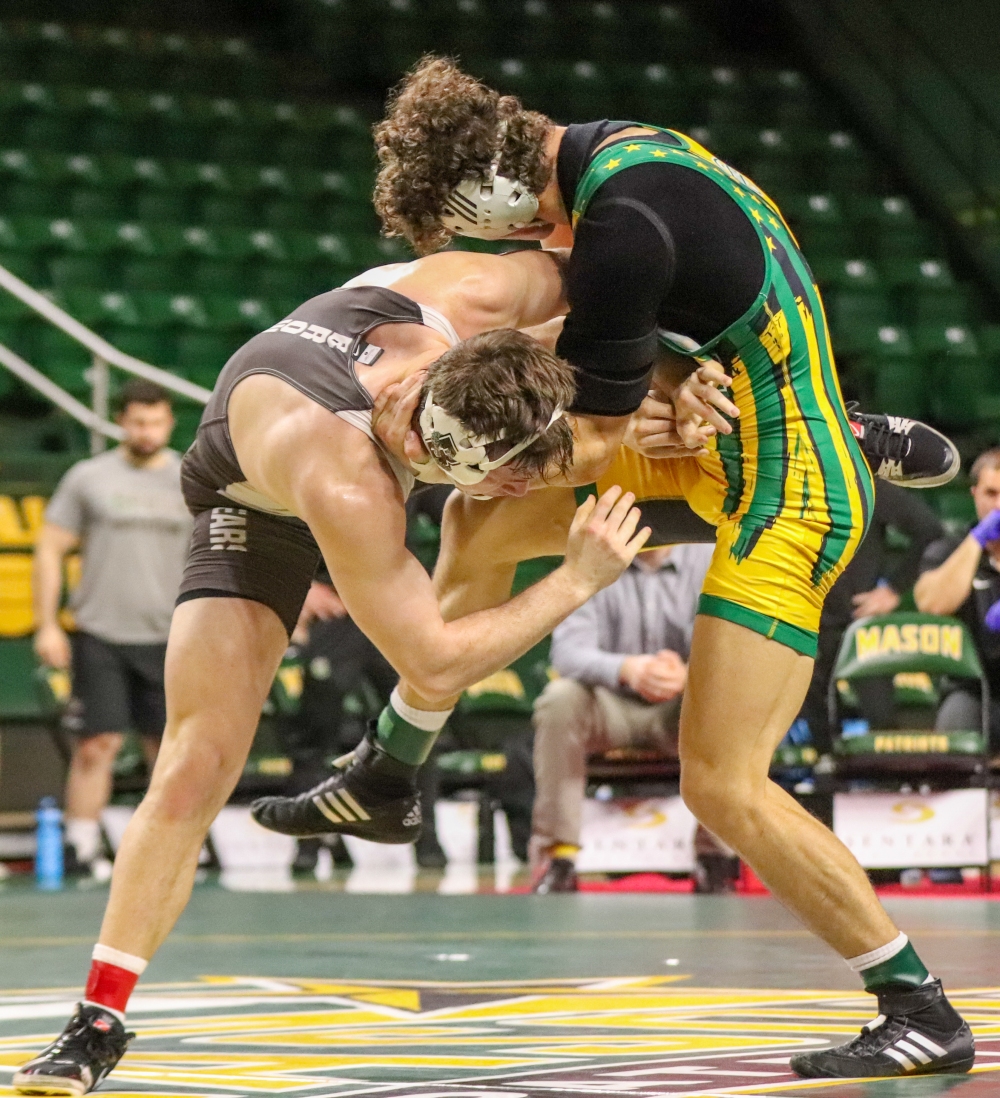 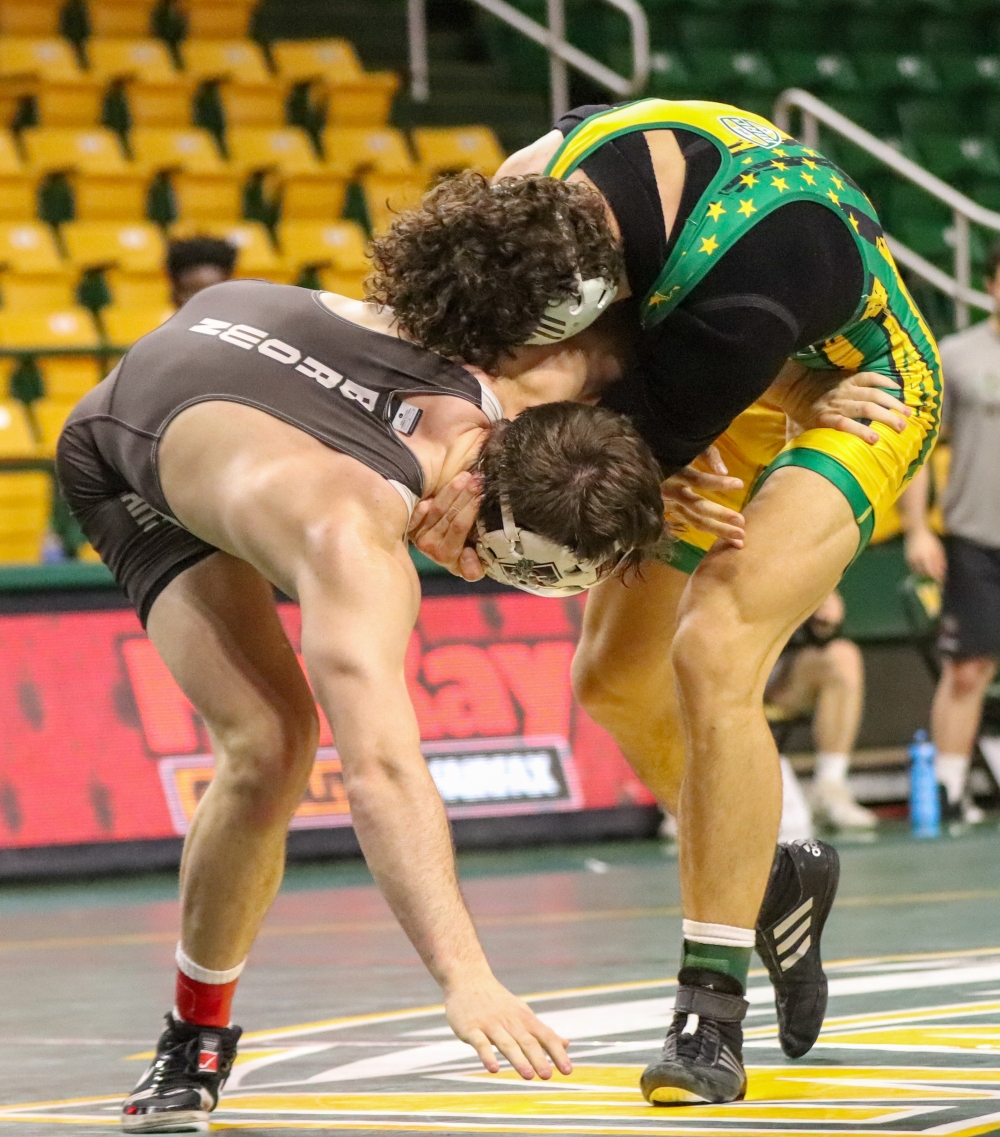 Post match, Coach Beasley had some help addressing the team. 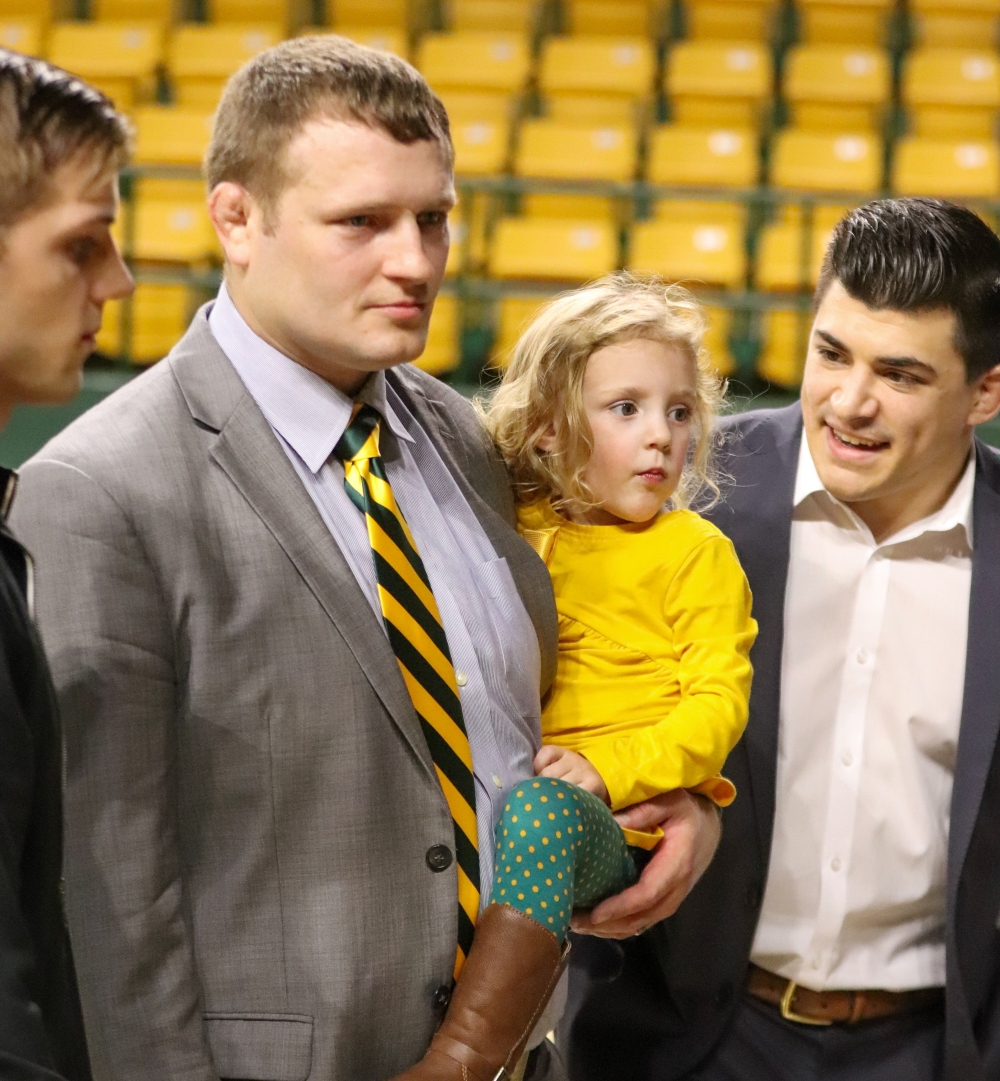 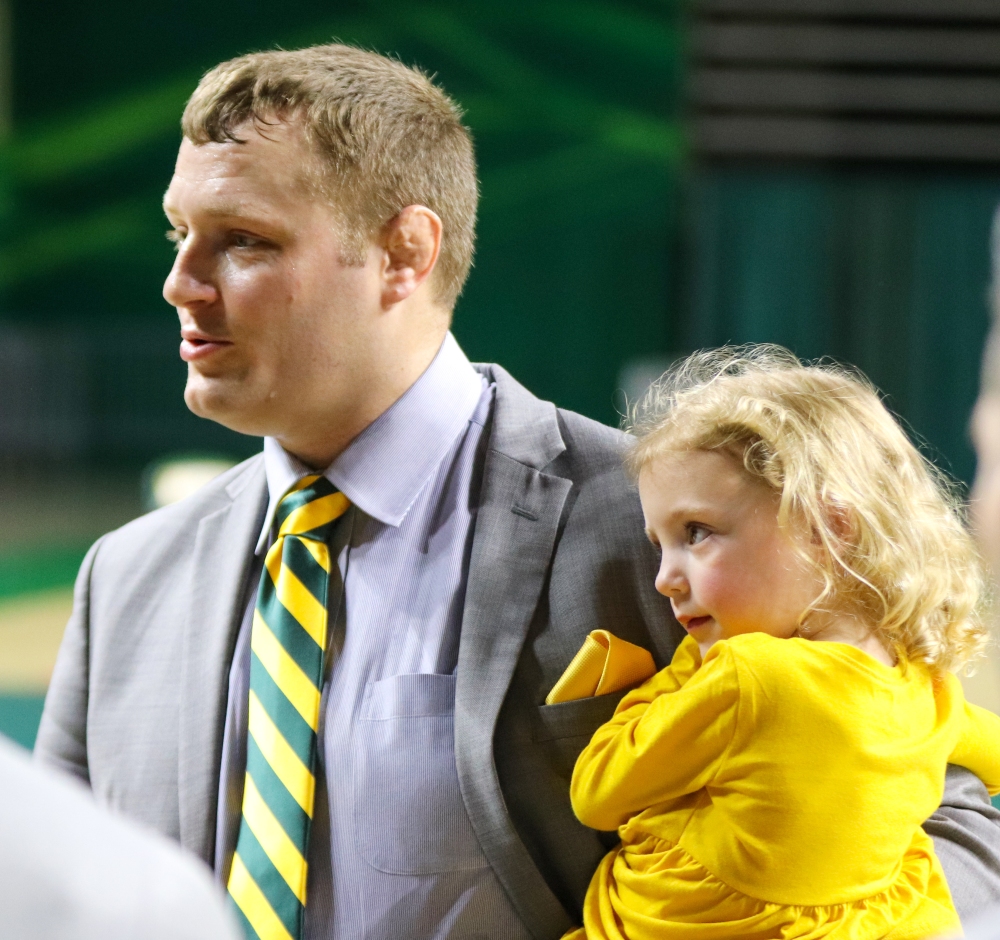 Just goes to show you are never too young to roll the mats. 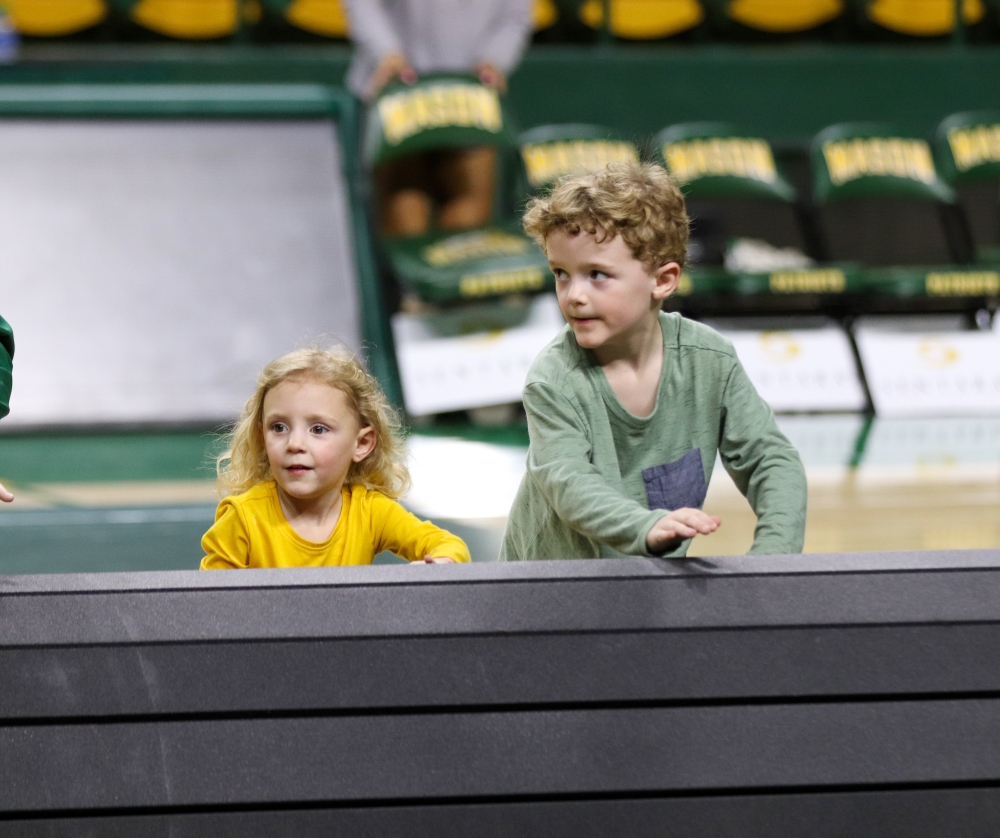