So I am a week late in posting about my most recent trip to a wrestling match. A good friend of mine said, “maybe your heart just isn’t into it?” I told her I disagreed! As a newcomer to the sport, I find it VERY exciting to watch!! I can’t believe what these athletes can do on the mat. Let alone, what they must endure during practices. I reached out to George Mason University coach Frank Beasley the other day about attending a practice session or two, and he obliged, so that might both continue my education about the sport, as well as provide some fodder for a future blog post! But it doesn’t explain my my tardiness in posting about this great sport.

The real reason is I am looking at it through the lens of my camera rather than through the eyes of a new spectator. I am too critical of my photographs. The action on the mat is fantastic! Yet, it’s very difficult to capture on film. Or, in this day in age, via a flash card. Unlike my first love, baseball, the athletes are constantly moving, trying to look for the best angle for a takedown, and when there is, the burst of action requires fast focusing and a fast shutter speed. And it doesn’t stop once they are down on the mat! Fortunately, for Christmas, I have asked my kids for some help purchasing a faster lens to help both with wrestling and with my baseball posts! So fingers crossed!!

All that said, on December 10, I ventured over to the University of Maryland to see the Terrapins hook up with Iowa in a Big 10 matchup. Iowa is currently ranked #7 in the country, and has five wrestlers ranked in the top 20 in the nation. Maryland, relatively new to the Big 10, countered with one wrestler being ranked number 10 in the nation. To me, the match of the afternoon was going to be the heavyweights, with #6 Sam Stoll from Iowa taking on #10 Youssif Hermida. More on that in a bit!

I noticed that the fan base was very mixed. For a MD home meet, I noticed quite a few fans sporting Iowa gear, as well as Penn State gear. The fans directly behind me were all wearing Penn State shirts, and their commentary on the matches was actually very informative. I wish I had gotten their names, but their comments on the matches, as well as comments on how the refs were calling things, made for quite the interesting editorial views, including the quote of the night: Iowa’s running a tilt clinic! Two matches were decided by tech fall (27-10 and 20-5) and even more of the matches it seemed like the Hawkeyes were just toying with their opponents, giving up escapes only to go for takedowns.

The matches were very one sided, but that’s not a bad thing. Jumping ahead a bit, the final score was Iowa 40-6 but that doesn’t account for the action on the mat. Yes, Maryland seemed to be outmatched at every weight class. But they never seemed to give up, certainly a testament to the attitude of wrestlers. you can read the Maryland recap here, but there were some interesting sidenotes.

Case in point, in the 184 pound match, red shirt freshman Spencer Woods came in with a heavily bandaged knee but wrestled anyway against Mitch Bowman. While he lost the match 20-5 on the aforementioned tech falls, he went down mid match wtih an injury. But he didn’t give up and finished the match! Kudos to him!

Match of the day

The one disappointment was the heavyweight match. After the 197 match, the score was 40-0. At the last minute, Iowa forfeited the the heavyweight match, making the final score 40-6. There were quite a few boos in College Park on that announcement! I don’t want to get into politics on this, since I am a newbie on the sport, but it begs the question, was Iowa afraid to risk the #6 ranking of Stoll vs #10 ranked Hemida? One will never know but it left quite a few more experienced fans questioning the call after the match! I guess time will only tell.

Quote of the day

“Stretch him!”
Reminded me of this fabulous t-shirt:

Other than the disappointment of the non heavyweight match, I was very glad I ventured over to MD to see this great match. Iowa had the number 2 ranked wrestler Brandon Sorenson as well as the number 3 ranked Michael Kemerer compete. It certainly helpeld in my wrestling education to see a top ranked team compete! At 141, there was an Iowa takedown with 9 seconds left to tie the match, with Turk from Iowa winning the match on riding time. I can’t waith until my next match! 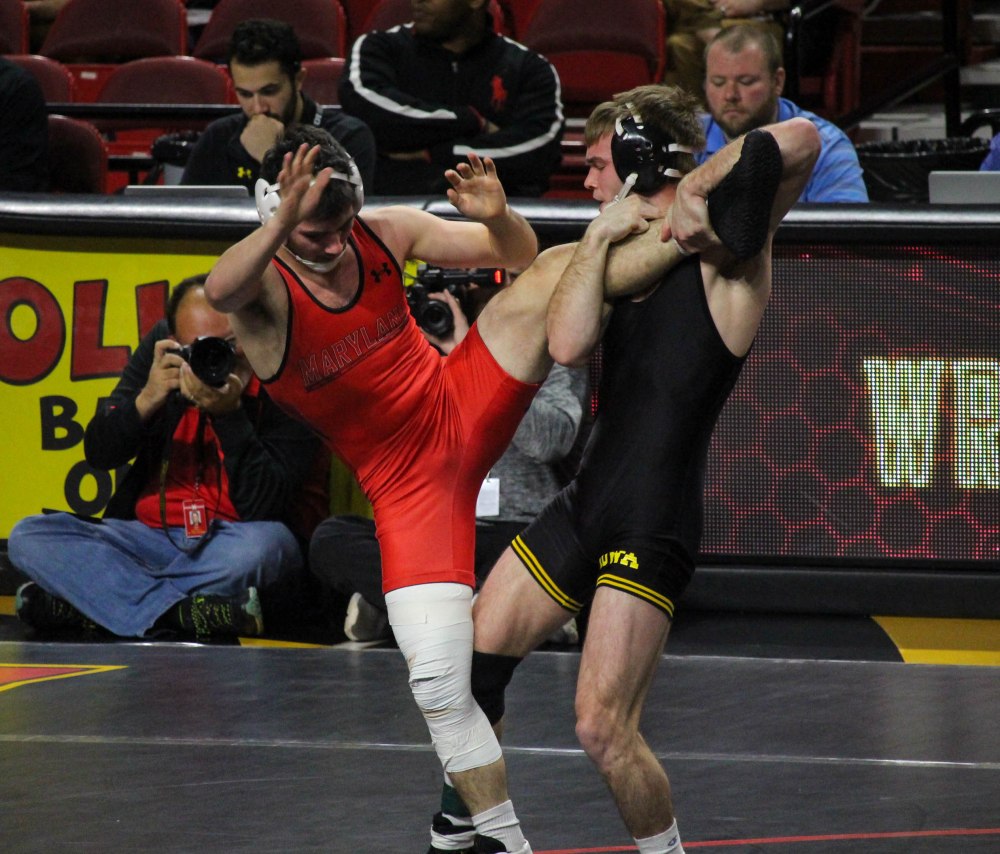 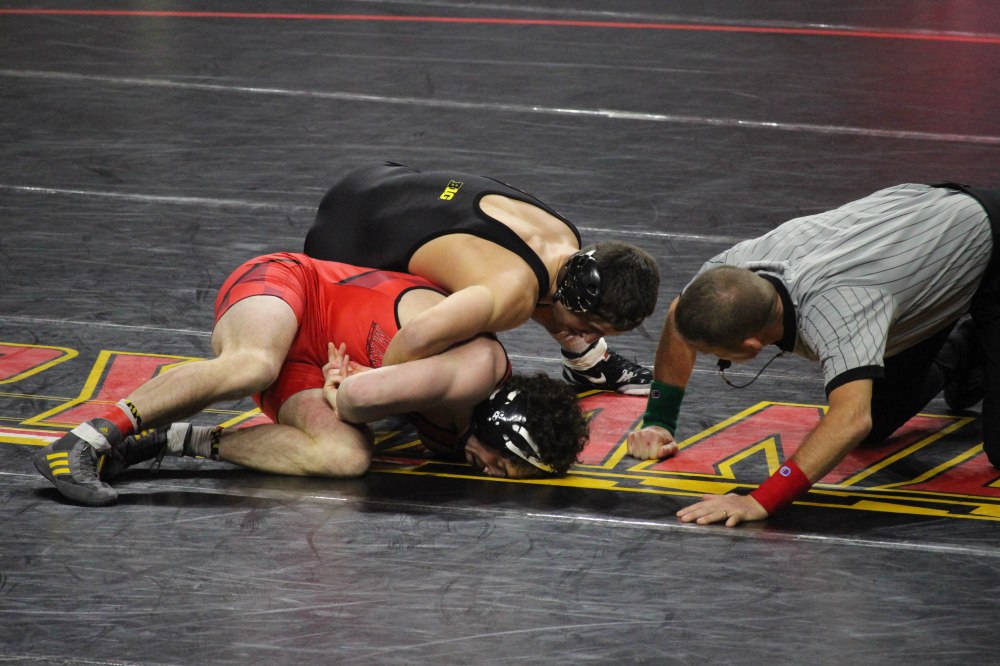 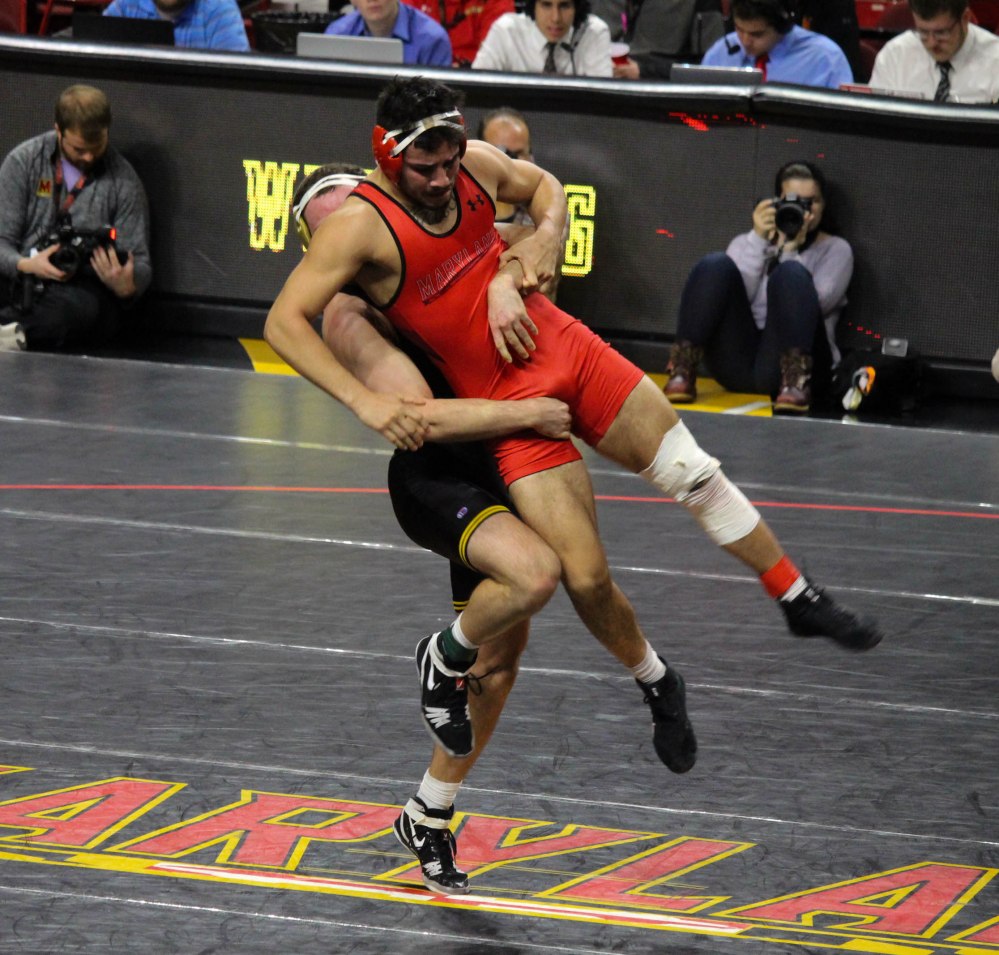 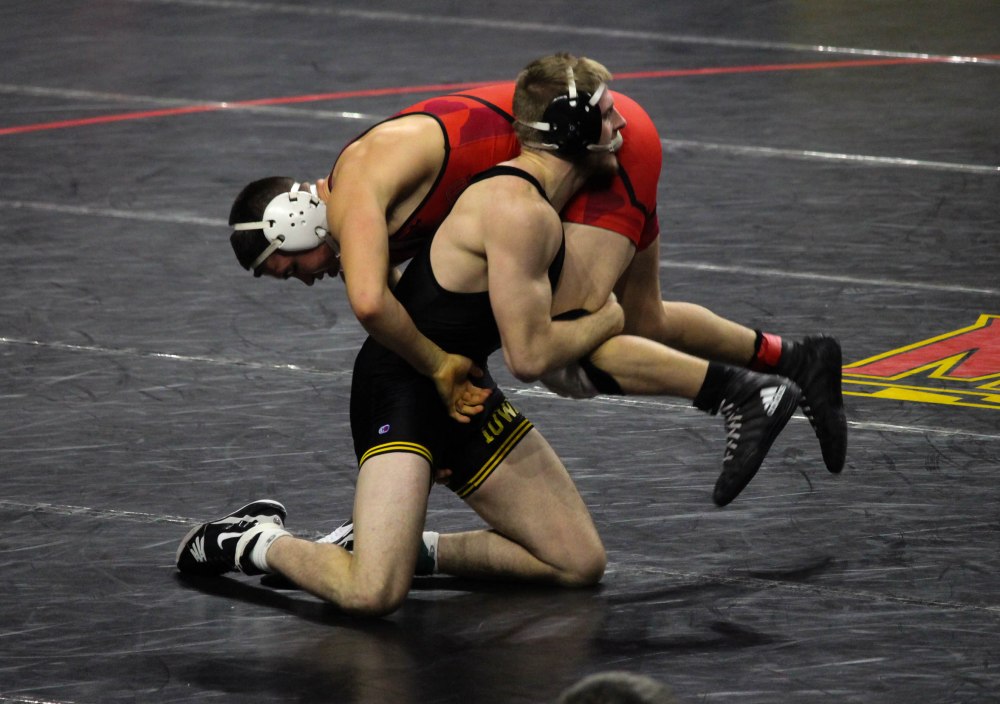