I recently made a trip to New York. No, I made a pilgimage to New York. To meet my baseball hero, and blog name sake, Ed Kranepool. It was the first time I had met him since a brief encounter as a kid at a spring training game in St. Petersburg, FL in the late 70s. The thing I remember most about that first meeting was how his eyes lit up when we finally got his attention. He was smiling, truly happy, and made the day of two kids who wanted to meet him and sign the poster we made, which read “Let’s Go Big Ed!.” Forty years later, he still had the eyes and the smile. And the moment we shook hands in his home on Long Island, I could tell he was the same great guy who made my day so many years ago.

I’ve posted before about how this blog came to life, and why I named it for Mr. Kranepool. You can read it here. You can find pictures of all my Ed Kranepool baseball cards, and some very cool links to his chat with author Ira Berkow about the 2013 book, “Summers at Shea” and other anecdotes. And while I would love to actually sit down and do a formal interview with Mr. Kranepool for this blog, that wasn’t the purpose of my visit.

In December 2017, the New York Times did an article about Mr. Kranepool and how he was selling much of his memorabilia that he has collected over his lifetime, and also about his recent health issues. While I knew he had some health issues recently, I didn’t know the current situation. I wanted to help. And I wanted one chance to actually tell him how much of an impact he had on a sub par little leaguer and kept the love of game in my heart.

I reached out to the author of the article, who put me in touch with Mr. Kranepool’s agent, Marty Gover of Momentun Sports Management. I spoke with Marty shortly before Christmas, and told him my story of my first meeting with Mr. Kranepool. He thought that was awesome, and set up some time to meet with him. Marty is a great guy, and a great friend of Mr. Kranepool, and you can tell they have more than just a professional relationship. Thanks Marty!

I brought a notepad with me, as any blogger would, but when I first shook hands with Mr. Kranepool, I decided this wasn’t about a blog. OK, sure, I am writing about it now, but I didn’t want to turn this into an interview. And it was anything but. That’s not why I was there! It was more like three guys just sitting and chatting about baseball, spring training, Bill Murray, and hometown memories. Marty hadn’t relayed the story I told him, so I recounted how I had first met him, and what the visit had meant to me. We then talked about the many spring training adventures he had in Florida and in St. Petersburg, since that’s where I am from. I could have listened all night. What a great story teller. He told some great stories, including:

How he and Pete Rose would go to Derby Lane to watch greyhound racing. He said that Pete would also go to the $10 window, while he would go to the $2 window! (Why does that not surprise me??) I told him that my grandfather was a cop in St. Pete for more than 20 years and would moonlight at the dog track as a security guard. Mr. Kranepool said it was especially fun on a wet night, as the dogs would fly around the first turn and just fly all over the place in the mud!

He remembered the segregation in St. Petersburg, and how the Mets would stay at the Colonial Inn (now the Post Card Inn) on St. Pete Beach, but the black players weren’t allowed on the beach. In fact, as late as the late 50s and early 60s, blacks weren’t allowed to (or highly discouraged to) use Spa Beach downtown or St. Pete Beach. Back in the day, they had to use South Mole Beach.

He talked about the long bus rides across the state, and how they would try to get out of the bus rides by saying they would just stay behind and do extra bp. He also said that when they played in Cocoa Beach, they would find snakes and other critters right there in the dugout. Which lead to a couple of interesting stories. First, he told a story of golfing once with Willie Mays. Ed had hit his approach shot to just a few feet from the cup. When they drove up to the green, they found a rather large alligator sunning himself. Ed and Willie backed off and sat there for a few minutes, debating their next move. A tough decision since Ed would be putting for an eagle! The group behind them pulled up and asked what the trouble was, why weren’t they moving up. They quickly informed the group about the gator, and Ed decided losing a hand or leg wasn’t worth the eagle attempt and moved to the next hole!

Ed’s agent, Marty, found all this interesting, not having ever dealt with gators, snakes, etc. in Florida. I told him that one time in the 1920s, Babe Ruth wouldn’t shag fly balls at (now) Huggins-Stengel field in St. Pete because there was a gator in the lake. Ed then pointed to a photo of him and Ron Swoboda looking at a gator in Crescent Lake. I cracked up, because I told him I had run hundreds of miles around that lake when I ran cross country in high school!

And speaking of Huggins-Stengel Field, that was my first ever blog post, first posted on an old site, then on this current site. You can read the history here, which includes some great videos of the Yankees practicing there! Here’s one of the videos:

While we were on the subject Huggins-Stengel Field, I told him I had also saved the comedy bit he did for Saturday Night Live with Bill Murray about Chico Escuela and the tell all book, “Bad Things Bout the Mets.” He did remember the shoot, but hadn’t seen the full clip since it aired in the late 70s. Marty had never seen it. So I loaded it up on my phone, and they both watched it and loved it! Ed said he’s a big fan of Bill Murray, so if anyone is reading this and knows him or his agent, I think a re-creation of that would make Ed’s day!

As the evening came to a close, I did decide to purchase something from his collection. It was a tough choice, he had some fantastic pieces that any collector would love to have. But one thing stuck out, because it was close to my home – the photo of him and Swoboda checking out the gator!! I also asked if he could autograph a ball for me, even though I was given one a few years ago as a Christmas gift. This one, though, is special because I got to see him sign it! It has already taken its place on my shelf, and has replaced my ball autographed by Rays announcers Dave Wills and Andy Freed (sorry guys).

Before I left, he also signed two posters for me, and I asked if I could get a photo of his World Series ring from 1969. 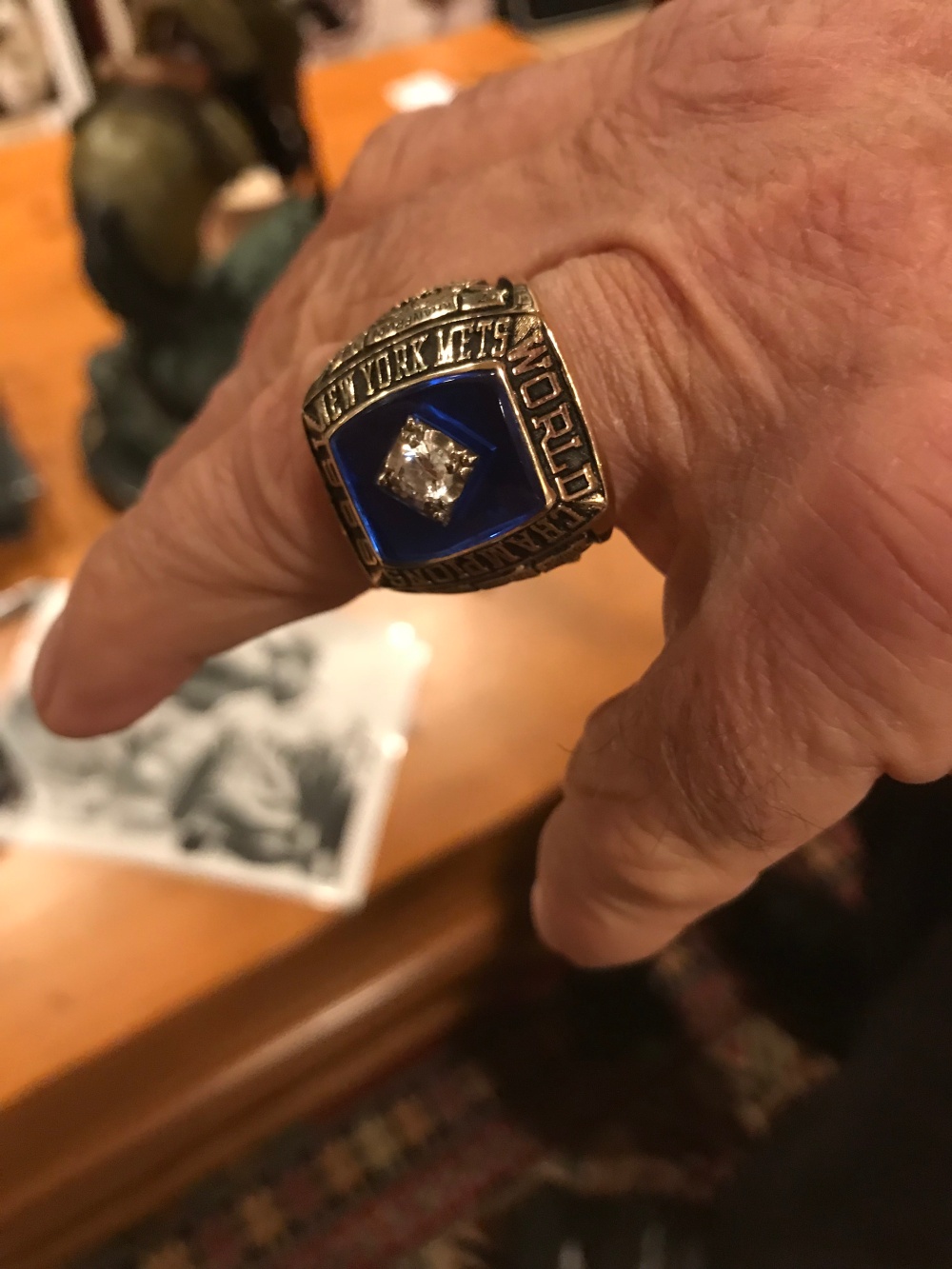 I was there for just over an hour, and didn’t want to take up more of his time, although it seemed like it was only five minutes! Sometimes when you meet your childhood heroes, it doesn’t live up to your expectations. This was not the case! Mr. Kranepool is a great guy and I really appreciated him letting me come over to spend a few minutes with him.

I’d say looking into his eyes, he has the heart of a giant. But that’s not right…..

He has the heart and soul of a Met! Thank you, sir!